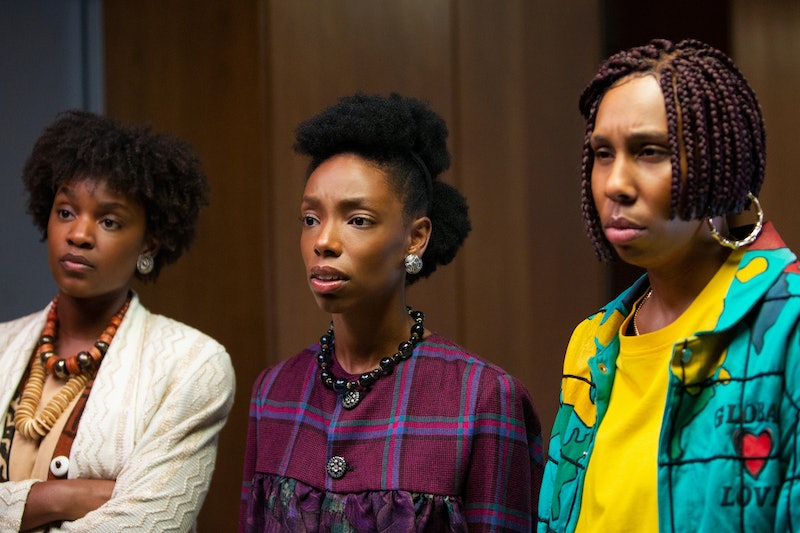 The next addition to your Halloween movie watchlist will make you think twice before your next big hair makeover. Hulu's Bad Hair trailer stars Laverne Cox as a killer stylist — literally. And her work just might give you nightmares.

Bad Hair is set in 1989 and focuses on Anna Bludso (Elle Lorraine), a production assistant who hopes to work up the ranks at the Black music video TV show she works for in Los Angeles. But her boss, portrayed by the legendary Vanessa Williams, hints to her that she needs to upgrade her weave if she wants to make it far in the industry. Of course, Anna takes the misguided advice and turns to stylist Cox, who provides her with perhaps the most killer weave in history. It does indeed slay by day, but after work, it takes a devastating toll on Anna — and seemingly brings out demons in those around her. Truly, if writer-director Justin Simien's new horror film, which premiered to rave reviews at Sundance Film Festival in January, proves anything, it's that not all weaves are trustworthy.

Aside from Lorraine, Williams, and Cox, the new film features a star-studded cast including Kelly Rowland, Lena Waithe, Jay Pharoah, Blair Underwood, Chanté Adams, and Usher — yes, that Usher, or as the trailer credits him with his full name, Usher Raymond IV. Given his cameo in 2018's Hustlers, he's really building up a solid acting resumé.

In a January interview with Entertainment Weekly in January, Simien, most known for creating the hit Netflix show Dear White People and writing and directing the movie it's based on, described his new film as a "psychological social thriller that is a commentary on the American experience and the kind of quiet little deaths we all have to endure to advance and be seen by mainstream society.”

He said that the inspiration of the film — and possibly the scariest thing about it — is the experience that marginalized people, and Black women in particular, feel everyday, especially when they feel like it's "not enough" to come as they are. "It’s literally in codes of conduct at various high schools and workplaces, coded language that basically sort of says that if you come with your hair the way it naturally grows out of your head if you’re a black person, that’s somehow unprofessional or unkempt," he explained. "What happens to a person when your entire life you’re inundated with messages that say you can’t come as you are? To me, the most horrifying aspects of this movie, as crazy as the premise is, are the things that are just true."

Bad Hair premieres on Hulu on Oct. 23, so you have a couple months to prepare yourself — and make any changes necessary to make sure your own hair-do won't hurt you.