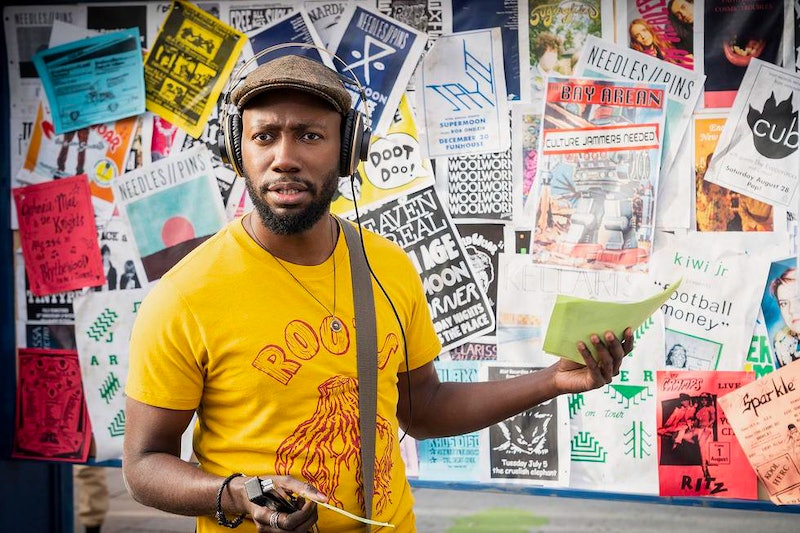 An all too familiar scene of police violence opens the trailer for Hulu's timely new comedy Woke. Inspired by the life of artist Keith Knight, the series stars New Girl favorite Lamorne Morris as Keef, a Black cartoonist who likes to keep his work "light," until he's mistaken for a robbery suspect by the police, leaving him literally "woke" to the racial injustices around him. The eight-episode first season is set to premiere in its entirety on Sep. 8, and the first trailer suggests Woke will adeptly balance humor with the serious topics of police brutality, cultural appropriation, and racism.

Knight's work, which includes acclaimed comic strips The K Chronicles and The Knight Life, mixes autobiographical elements with smart takes on social justice. And the series promises to do more of the same. The artist is also the co-creator of the series, which will blend animated elements with the live-action storytelling. The trailer offers a glimpse at how the melding of the two genres will work, when Keef begins to communicate with inanimate objects after being wrongfully arrested by the police. "Once your eyes are open, you can't unsee," Keef is told in the clip.

In the official press release, Hulu describes Woke as the story of a cartoonist on the rise who "must now navigate the new voices and ideas that confront and challenge him, all without setting aflame everything he’s already built." Those ideas come from unexpected places, including glass bottles that inform Keef that the "policeman did a number on you," and a trashcan that points out the "gentrifying devils" taking over his local barber shop.

The role of Keef marks a return to TV for Morris who played Winston in all seven seasons of New Girl. Earlier this year, the actor used his platform to speak out against police brutality in the wake of George Floyd's death at the hands of police officers in Minneapolis. On May 27, Morris posted a lengthy message on Instagram calling for America to tackle the issues of police brutality and systemic racism head on.

"Instead of posting the latest dance challenge on tik tok today just start asking questions," he wrote in part. "Why did this happen? Why does it keep happening? What can I do to spread awareness?" While Woke was completed prior to the death of Floyd, it seems to be uniquely crafted to speak to this moment when the world is finally reckoning systemic racism — and waking up to the fact that everyone can do more to fight social injustice.

More like this
'The Crown' Season 6 Has Suspended Filming "Out Of Respect" For The Queen's Death
By Bustle Staff
Ozzie’s Coming Out Scene With Kitty On 'That ’90s Show' Has Twitter Sobbing
By Brad Witter
Wait, Is Barney Stinson Related To Sophie On 'HIMYF'?
By Gretchen Smail
'The Last Of Us' Video Game Revealed Tess’ Fate In The HBO Series
By Brad Witter
Get Even More From Bustle — Sign Up For The Newsletter