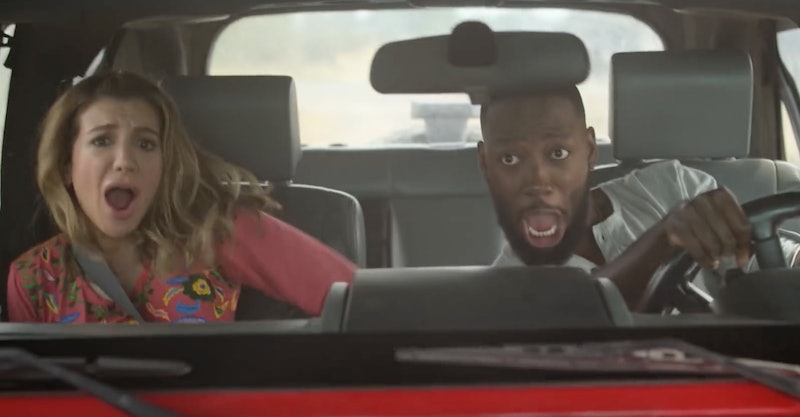 When New Girl called it quits back in 2017, many fans had to reckon with the fact that they wouldn't be able to catch the favorite loft-mates together again. Now, three years later, here comes Netflix's Desperados, which reunites a former New Girl couple — this time in a brand new light.

In Desperados (out July 3), Wesley (Nasim Pedrad) is a woman desperate to find "the one." After going on a date with Sean (Lamorne Morris) she exits the restaurant only to trip and fall... right into the arms of her dream partner, Jared (Robbie Amell). They're the perfect couple — that is, until Jared suddenly ghosts Wesley out of nowhere. Devastated, Wesley sends Jared a scathing email, co-written by Wesley's two best friends, Brooke (Anna Camp) and Kaylie (Sarah Burns). But not all is as it seems. Shortly after sending her drunken tirade, Jared reveals he's been in an accident in Mexico and hasn't checked his messages for a while. Before long, Wesley and her friends set out on a bit of a heist, heading to Mexico in order to steal Jared's phone before he can read the email she's sent him, thus ruining their perfect relationship.

While Pedrad's character pines after Jared, it's Sean who's played by Pedrad's former New Girl co-star. But in the series, Morris didn't play Pedrad's reject date. The pair made up one of the show's most beloved couples, Winston and Aly. Morris was a veteran on the series, having starred as Winston since the show's first episode. Pedrad was a relatively later introduction, as her character, Aly, wasn't introduced until a bit later, starting off as Winston's detective partner in the LAPD. Over the course of the show, the two became close and eventually married, even going on to have a number of children, as shown in New Girl's final episode time skip.

In Desperados, the two form a very different pair, as Wesley unexpectedly runs into Sean on her Mexico phone heist shenanigans. Wesley manages to wrangle Sean into (reluctantly) helping her on her quest to preserve her current relationship, which should result in some likely highly conflicted feelings from the both of them.

On Instagram, Morris commented a bit on their reunion, posting a photo featuring the both of them together. His caption reads, "No. This is not another episode of New Girl. But Yes, it is @nasimpedrad & I doing another thing that is dope! This time we did it in MEXICO!!!!!!!" Pedrad's caption on another photo of the pair on her own Instagram was short, but very sweet, as well: "Someday we’ll work w other people."