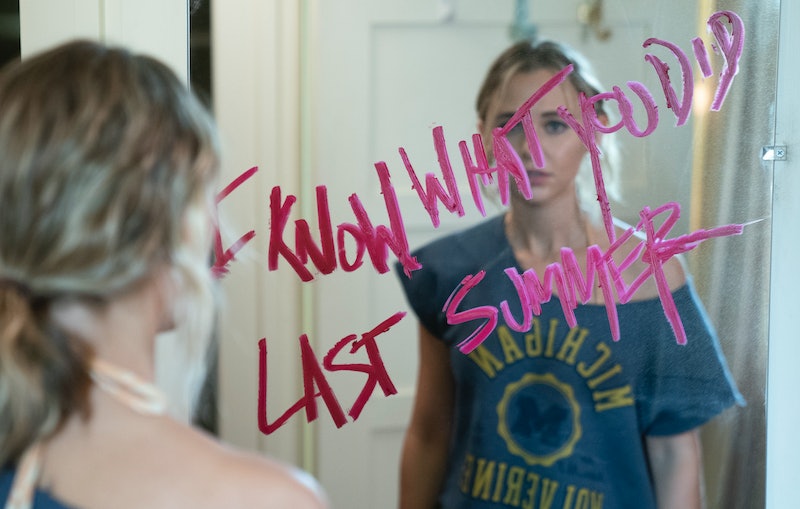 Horror, like fashion, is cyclical. Which means that what scared us decades ago is often recycled for new generations. Take 2020’s The Craft: Legacy, which updated 1996’s witchy cult teen film The Craft, or the two different Scream properties that have revived the 1996 franchise on both television and in an upcoming movie. This brings us to Oct. 15, when Amazon will release its television reboot of I Know What You Did Last Summer.

Fans of the title will remember the original movie from 1997, staring turn-of-the-century heartthrobs like Jennifer Love Hewitt, Freddie Prinze Jr., Sarah Michelle Gellar, and Ryan Phillippe. The new series follows the same conceit as its predecessor: a group of teens accidentally kill someone on their graduation night, then dump the body, promising to never speak of the incident again. Unfortunately, once they return home from college for the summer, their grave secret comes back to haunt them in the form of brutal killer who tries to pick them off one by one.

Though the show features an entirely new crop of characters, the original cast seems to think highly of the actors they’re passing the torch to. Get to know them below.

Amoruso got his start on the Snapchat original series Solve, but I Know What You Did Last Summer could be a breakout role for the young star. He took to Instagram to promote the show, writing that the premiere is “gonna be preettyyyy sweeet.”

Johnny appears to be one of the six main characters involved in the accidental murder. In the trailer, he’s described as “totally fake,” despite being a musical prodigy headed for Juilliard. During a press junket, Amoruso also revealed that his character is definitely not good at keeping secrets.

You may recognize Iseman from her role in the recent Jumanji reboots or the 2019 horror film Annabelle Comes Home. She pulls double duty on I Know What You Did Last Summer as twins Allison and Lennon, and there seems to be some strain between the siblings. On Instagram, Iseman expressed her delight at being cast in the show. “......does this make me an official scream queen? Eeeeeep,” she wrote in January. She also revealed in a full cast interview with The Upcoming that one of her biggest horror inspirations is Shelley Duvall from The Shining, so look for traces of the character in her performance.

Before being cast in I Know What You Did Last Summer, Moore only had a handful of roles, most notably in 2016’s Andy Samberg-led mockumentary Popstar: Never Stop Never Stopping. In her interview with The Upcoming, Moore revealed that she was a fan of the original I Know What You Did Last Summer movie and is excited to leave her mark on the franchise, adding that she shares the same overly “straightforward” approach to communication as her character. In the trailer, Riley is referred to as struggling with substance misuse.

Goodman is another relative newcomer with only a smattering of roles, most notably in the miniseries Rat Bastard. Goodman wrote on Instagram that he’s “radically thankful [and] extremely stoked” to be part of I Know What You Did Last Summer, in addition to posting some behind-the-scenes photos with the rest of his cast while filming in Hawaii. Hi character is referred to as “a sociopath,” which may more may not bode well while he’s trying to cover up the teens’ accidental murder. Goodman also told The Upcoming that he was excited about integrating social media into the updated story.

Of the main cast, Tju has one of the longer acting resumes. She’s appeared in shows including Grey’s Anatomy, Liv and Maddie, iZombie, 9-1-1, and A.P. Bio as well as the film 47 Meters Down: Uncaged. Tju isn’t a stranger to the horror genre, having acted in several episodes of MTV’s Scream series. She posted a picture of her character on Instagram, her face covered in a honey-like substance, with the caption, “Watch me get into some sticky situations.” Based on the trailer for the show, Margot seems to be a serial liar who, as Tju revealed in a press junket, uses her phone as a security blanket. Tju also credited Neve Campbell and Sarah Michelle Gellar as being her scream queen inspirations while speaking to The Upcoming.

The I Know What You Did Last Summer cast is rounded out by Cassie Beck as Courtney, Bill Heck as Bruce, Brooke Bloom as Clara, and Fiona Rene as Lyla. It’s not yet clear what roles these characters will serve in the story, but given that the actors are older than the main group the show revolves around, Lyla, Clara, Courtney, and Bruce are likely parents or other authority figures.

More like this
A 'Terminal List' Sequel & Spinoff Are Reportedly In The Works
By Kadin Burnett and Grace Wehniainen
Everything To Know About The 'Daisy Jones & The Six' TV Series
By Maxine Harrison and Brad Witter
'That '90s Show' Is Officially Coming Back For Season 2
By Gretchen Smail and Grace Wehniainen
The Plane Crash In 'Dear Edward' Is Based On A 2010 Tragedy
By Grace Wehniainen
Get Even More From Bustle — Sign Up For The Newsletter
From hair trends to relationship advice, our daily newsletter has everything you need to sound like a person who’s on TikTok, even if you aren’t.