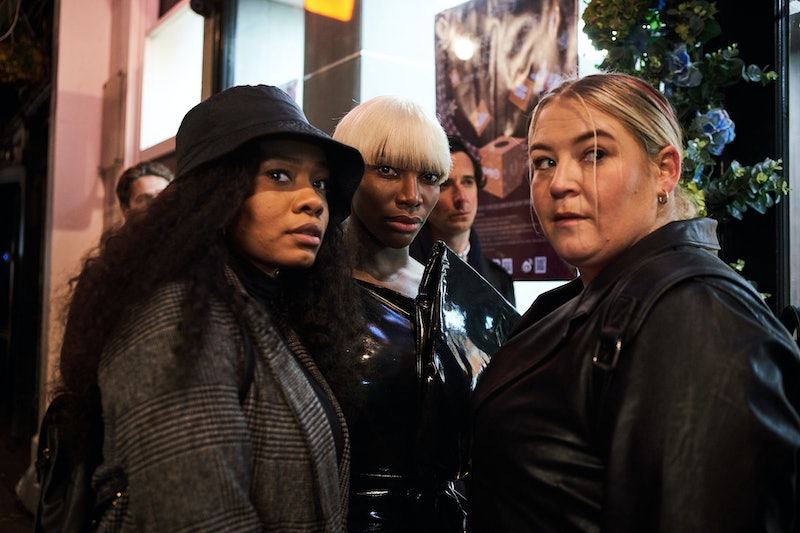 Spoilers ahead for the season finale of I May Destroy You. Michaela Coel’s I May Destroy You ended this week with an episode aptly titled “Ego Death” — and summer TV is more boring again for it. Rather than fix on a certain conclusion for Arabella, whose arc has charted the aftermath of her sexual assault, Coel presents four alternative and exclusive codas for the I May Destroy You finale ending. There’s a revenge fantasy in which Arabella kills her attacker and leaves his corpse under her bed. There’s a fantasy of mutual understanding in which she comes to see the darkness of her rapist’s internal world before police ultimately cart him off to face retributive justice. In a third timeline, gender norms are flipped or are maybe even nonexistent: Arabella's attacker is now a conquest, and she has the upper hand. They have sex at her place, and when she asks him to leave, he takes with him the version of the attacker still rotting below the bed (in this world, there are no attackers). And in the fourth fantasy iteration, Arabella's trauma is already processed. She doesn’t need anything from her attacker. She and her friends secure loving partners and professional success. Life is but a dream.

Each of these endings reads as implausible as the last. None feels more true or likely, in part because Coel has spent a full season rendering a world in which victims are regularly denied justice and where there are no reliable measures to correct for inequality. Throughout all 12 episodes, very bad things happen to mostly good people who also do bad things with little indication there’s some positive trajectory at play in the background. In “Ego Death,” Coel pushes the argument further: it’s not happy endings that prove elusive, but endings altogether.

It’s not happy endings that prove elusive, but endings altogether.

The decision to provide no formal conclusion to I May Destroy You allows Coel to achieve an improbable sense of mimesis. Because for so many survivors of assault, there are no endings. What’s happened to Arabella is a part of her now. There’s no way, at least not yet, for her to draw a line under it, and there’s no way to end a series about an event that may live in its protagonist forever. Coel leaves Bella in the liminal space where people spend so much of their real lives: not going headlong down any one path, but at the decision point between them, still waiting for the answer to arrive.

But Coel’s not just experimenting with story here. She’s playing with form and tailoring it to her narrative. Television has long shed its reputation as inferior to movies, but it remains a class of mass market entertainment, bound to giving its viewers a reason to tune in again next week. That reason is to see what happens next, and then next again after that, and after that until maybe, sometimes, there’s an ending to a show, like The Sopranos, which stops just short of giving it all away — a final, shocking cut to black.

On the finale of I May Destroy You, though, there is no progression. Images are echoed and refracted across the alternative endings and seemingly separate timelines eventually elide. It refuses to satisfy a viewer's need to "know what happened next" and in doing so seems to negate the promise that there will be a definite and perceptible “next” for Arabella, who is still steeped in a recovery process that has defied linearity. If we’re unsatisfied with the “messy” ending, perhaps it's because we are uncomfortable with the moral complications of the world it reflects. Because really, the finale seems concerned with neither satisfying nor shocking its viewers — it's more faithful to serving its story than anyone or anything else. Coel has emerged with a reputation as a television writer who has something compelling to say, and as I May Destroy You proves, her own way of saying it.