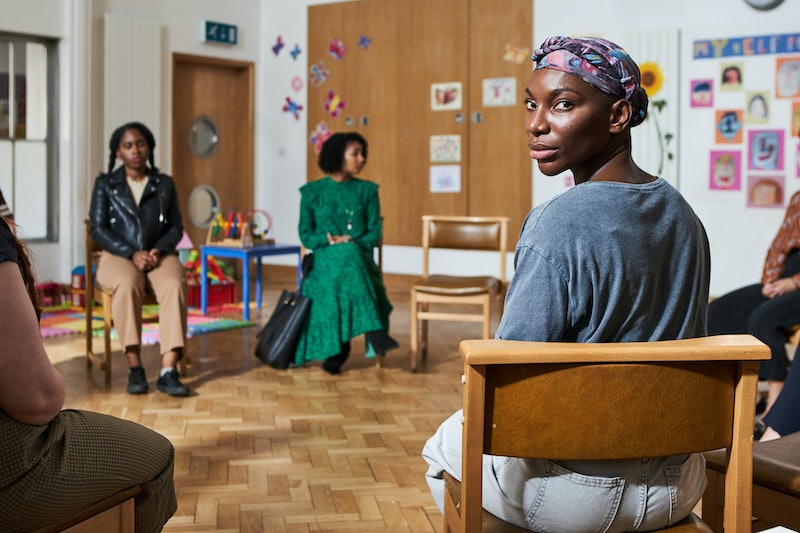 The advance Arabella earned for her next book has run dry, and she can’t afford rent or groceries for Terry’s birthday party. Luckily, Theo, a white childhood acquaintance, has a way to help. The two reconnected through Theo’s support group for survivors of sexual assault, and the group has given Arabella a sense of purpose. At meetings, she holds court. Her idea of herself is expanding. “Prior to being raped, I never took much notice of being a woman,” she tells her literary agents, reading from the germ of a new project. “I was busy being Black and poor.” Of course, she’s still poor. On the most recent episode of I May Destroy You, her debit card is declined, and her publisher refuses to increase her advance. It's Theo who comes to Arabella's rescue with a scheme to make quick cash working for a vegan delivery service.

Theo recruits Arabella to phone bank for the company, but before she makes a single call, the CEO suggests Bella could make double by doing sponsored social media posts. The bait-and-switch is transparent. They don’t care that Arabella isn’t vegan (in fact, no one even asks). For her part, Bella doesn’t care much about how livestock agriculture accelerates climate change. She's promised cash up front if she agrees to wear the Happy Animals t-shirt, so who is using who here? The company that lured Arabella into the office with the offer of a worse job, or the person now doing a sliver of the work for twice the pay?

The complications of the arrangement only spill out later, after a friend of Arabella's accuses Happy Animals of exploiting her to reach her Black fan base. Unnerved by the conversation, Theo confesses to Bella that, yes, she gets money for scouting influencers, but she gets an even bigger referral fee for bringing in people of color. “The more I think about it the more I’m like, I probably should have told you,” she admits. “Obviously then you wouldn’t have, and I really need the cash. And you said you need the cash.” They both agree not to work with the group going forward, but Bella doesn’t fault Theo for deceiving her. After all, it was Theo, increasingly a support for Arabella, who spotted her the grocery money when she needed it.

It’s not the first time Arabella has been used for being Black on I May Destroy You — her white agents, for example, are speechless when she wants to write about her rape rather than her urban milieu — but it’s the most intimate. Terry's been distrustful of the reappearance of Theo, who, when they were teens, falsely accused a Black classmate of rape. So why isn't Bella, who turned Theo in to the headmaster for that lie when they were young, angry with her now? She doesn’t explain, but maybe it’s rooted in that same expansion of self that Arabella discussed with her agents — the one that causes her to ignore her friends in favor of retweeting the pleas for help she receives online. “Am I too late to serve this tribe called women?” she writes. “Do I actually understand what it is to be a woman struggling?”

Ultimately, Bella feels more kindred with women generally than she did before her assault, including Theo. They've been reconnecting over what they have in common as survivors and as kids who grew up on the same council estate. That either of them were involved with Happy Animals at all was a matter of facing down the same economic uncertainty. Theo's deception was unjustifiable, but she also doesn't try to justify it.

For the first time since they've been thrown back together, Arabella and Theo are confronting the differences between them rather than focusing on the histories that bond them. And, so far, it seems to be bringing them closer.