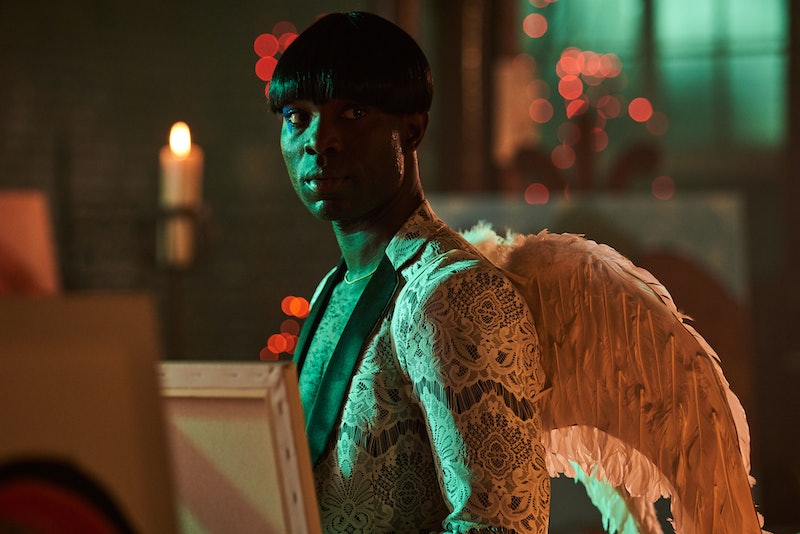 It’s Halloween night on I May Destroy You. Terry is dressed head to toe in white, crowned by a wispy halo; Arabella, now a full-blown anti-rape social media activist who advocates doxxing, is in a black party dress topped with a headband of thick black horns. And Kwame? Kwame is a grudging participant on the day’s spooky self-care tour. He wears a cobbled together, back-of-the-closet costume: white suit, feathered wings, black wig. As Terry tells him apologetically that the store only had one halo left in stock.

Still, he gamely trudges along to the pumpkin-festooned paint and sip where Arabella confronts him about having sex with a woman and only afterwards disclosing that he’s gay: “You kind of had penetrative sex with her under false pretenses.” The argument tumbles quickly out of control from there. Paapa Essiedu plays his ordinarily subdued Kwame with a guilty, sheepish defensiveness: “She kind of forced me.” Ever the shoulder angel, Terry does her best to contain the conflict. “He’s vulnerable,” she pleads with Bella, reminding her that Kwame, too, recently survived an assault.

It’s not the first time I May Destroy You has compelled us to question what separates good people from bad ones. Arabella is the victim of multiple rapes; she also locked Kwame in a bedroom with a stranger at a house party. Terry has devoted herself to helping Bella since she was attacked, but she keeps the secret that she told a mutual friend to leave Bella at the bar alone in the first place. And when Kwame attempts to report his own sexual assault, the police who listened with such delicacy and compassion to Arabella’s report ultimately make him regret ever coming to the station. "As a Black, gay man," Essiedu tells Bustle, Kwame is "very disempowered" before he even enters the precinct. "He comes out feeling less empowered than he did when he was going in."

Big and small choices don't always look different from each other as we're making them; the right thing and the wrong thing to do aren't necessarily worlds apart.

So what does it mean that Kwame, an assault survivor and unfailingly supportive friend until now, finds himself on the wrong side of a sexual deception? "I don't necessarily think of Kwame as being unwaveringly good," Essiedu says when I ask him. "He's really imperfect and he messes up. And obviously none of this is excusing behavior, but he's caught up so much in his fight to deal with what's happened to him and to come to terms with it that he makes decisions that I don't think he would have made in other situations." Walking around London in white wings and a black wig, after all, Kwame's only half an angel.

But Bella has an answer for that, too: "Just because you're vulnerable doesn’t mean you can make other people vulnerable," she tells Kwame, so sure of the bright line between what's right and wrong. By the end of the night, though, this line fades even for her. "When you paint things to make it look like you're just the victim and I find out that isn't the case, it really makes me question who you are." It's a barbed threat she hurls at Kwame when she learns what he's done, but she redirects it at herself when she finds the ultrasound photo from an old abortion under her bed. To be clear, she doesn't think the abortion was a mistake; she just can't believe how quickly she forgot about it ever happening. Big and small choices don't always look different from each other as we're making them; the right thing and the wrong thing to do aren't necessarily worlds apart.

Ultimately, Bella apologizes to Kwame, not just for locking him in the room at the party, but for how “intense” she was in her judgment of him earlier in the night. He apologizes for what he's done to a woman who isn't there to hear him, then takes off for another hookup. Who is the victim and who is the perpetrator? The show asks again and again — not to answer the question, but to critique it.

More like this
Here’s Everything Coming To & Leaving Netflix In February
By Jake Viswanath
Who Is Pete Davidson Dating? He & Chase Sui Wonders Got Caught Kissing
By Jake Viswanath
All The Clues Clint & Gina Aren’t Still Together After 'MAFS' Season 16
By Brad Witter
Mack & Domynique Reportedly Had An "Epic" Breakup On 'Married At First Sight'
By Brad Witter
Get Even More From Bustle — Sign Up For The Newsletter
From hair trends to relationship advice, our daily newsletter has everything you need to sound like a person who’s on TikTok, even if you aren’t.