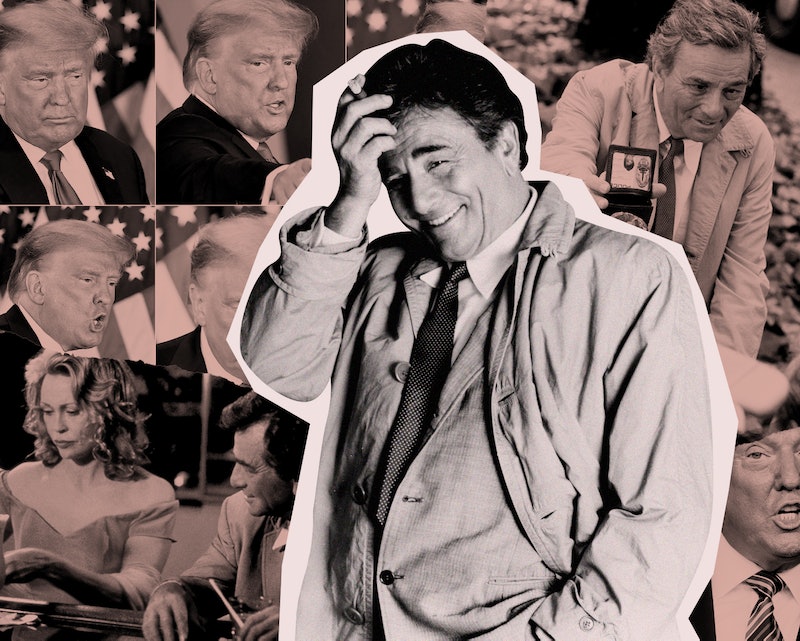 During the early days of quarantine, my comfort-food binge-watch was the '70s procedural crime show Columbo.

If you aren’t familiar, it stars Peter Falk as a homicide detective in a rumpled beige raincoat who undoes the elaborate murder plots of Los Angeles aristocrats while maintaining an air of “aw, geez” befuddlement that lulls the Cognac-swirling villains into a false sense of security.

Unlike most murder mysteries, there is never any mystery about “whodunnit” or even how they did it; every episode begins by introducing the one-off murderer and murder victim, showing how the murder takes place, and how the murderer attempts to cover it up. We don’t even see Lieutenant Columbo until about 20 minutes in, when he apologetically interrupts the murderer's squash game/wine tasting/symphony rehearsal to ask a few questions.

The tension of the episode lies in how Columbo will solve the mystery. What tiny detail will this unassuming working-class lieutenant notice in order to foil the otherwise perfect murder? And he does always foil it. Part of the reason I found Columbo so comforting in quarantine was that every episode follows a particular pattern — there is no tension that’s left unreleased. There is never any doubt that Columbo will catch the man we all know is guilty.

I’m not alone in my recent discovery of the solace of Columbo, no doubt facilitated by all episodes now streaming on Amazon Prime and Peacock (and many of us now having large, uninterrupted blocks of time stuck at home). The New York Times covered Columbo as modern comfort viewing, as did The New Yorker, with a comic by artist Joe Dator.

But sitting at home, clenching and unclenching my jaw as I refresh Twitter while waiting for more election results to come in, Columbo has become soothing in new and unique ways. Forget that the end result of every Columbo episode is a known entity — of course that’s the dream at the moment, to know how it’s all going to play out — but even more specifically, right now I’m fantasizing about Columbo villains, and the way they react when Columbo bests them.

Unlike a lot of cop shows, Columbo has no car chases or standoffs. No one runs, or gets shot. The extent to which “action” exists in the Columbo universe is several people standing in a foyer speaking to each other. The most dramatic set-piece they conjure is “eating dinner at a restaurant.” Like a chess player, Columbo patiently inches closer until he’s trapped the murderer in an inescapable contradiction.

At this point, the exquisite character-actor playing the murderer will sigh, or smile, or sometimes even laugh. He will all but shake hands and congratulate the lieutenant whom he had so underestimated. You see, he — the wine-drinking art connoisseur in a cashmere turtleneck and brown blazer — hadn’t seen through Columbo’s blue-collar façade. Columbo had outsmarted him, fair and square. Well done, detective, you may take me to jail now.

I don’t know what the state of the election is as this piece is published, but at the moment — even though the race is so close that my stomach has the pH of battery acid — President Trump very much looks as though he’s going to lose, and he’s wildly tweeting blatant misinformation to distract from that fact. He has filed lawsuits in several states where the legal votes have come out in Biden’s favor. He is riling up his followers with imaginary claims of “fake” ballots and fraud, for which there exists no actual evidence. It’s terrifying to be faced with the wafer-thin line between order and anarchy, democracy and despotism.

The pleasure of Columbo isn’t in knowing the ending (although, right now, at 12:04 p.m., I really wish I knew this election’s ending), it’s in briefly inhabiting a world where everyone agrees on a clear set of rules. When the murderers are outsmarted, they politely turn themselves in, maybe even a little pleased that if they were going to get caught, it was at least by a man as clever as Columbo. There is an elegance in their defeat, an acknowledgment of a game well played, and an understanding that there’s no point any longer in making a fuss.

There is no way to beat Trump with logic or reason. We have “gotten” him countless times, caught him in lies, in scandals, on tape, in criminal acts. It means nothing because Trump himself has no shame. Columbo himself could confront Trump with a flawlessly-reasoned case for how he’s already lost, and Trump would respond by tweeting that it was a conspiracy by the fake news media. His refusal to acknowledge when he’s lost sets us off balance. He and his supporters live in a world where calmly confronting them with facts and reason will not change their beliefs — your “so-called facts” become merely another piece of evidence in their grander conspiracy.

It's often said that Donald Trump has not fundamentally changed America, he has simply revealed a core of rot that has been there all along. There has always been cruelty, racism, systemic violence, and some might even argue that the false civility of polite pageantry only masks the darkness. But the death spasms of Trump’s presidency do genuine damage to public trust in the democratic process. We can’t out-reason an enemy if they refuse to agree to the basic terms of reason itself. I long for the day when the white-collar villains of this country will take their final sips of gin and tonic, and agree to go quietly.

More like this
'Brookside' Is Coming Back & Soap Opera Fans Are Going Wild
By Sam Ramsden
Twitter Is Saying The Same Thing About 'Love Island'
By Sophie McEvoy
Yes, 'The Price Of Glee' Is Available To Watch In The UK
By Catharina Cheung
'Succession' Season 4 Will Be An "Absolute Banger" According To Cousin Greg
By Bustle Staff
Get Even More From Bustle — Sign Up For The Newsletter
From hair trends to relationship advice, our daily newsletter has everything you need to sound like a person who’s on TikTok, even if you aren’t.