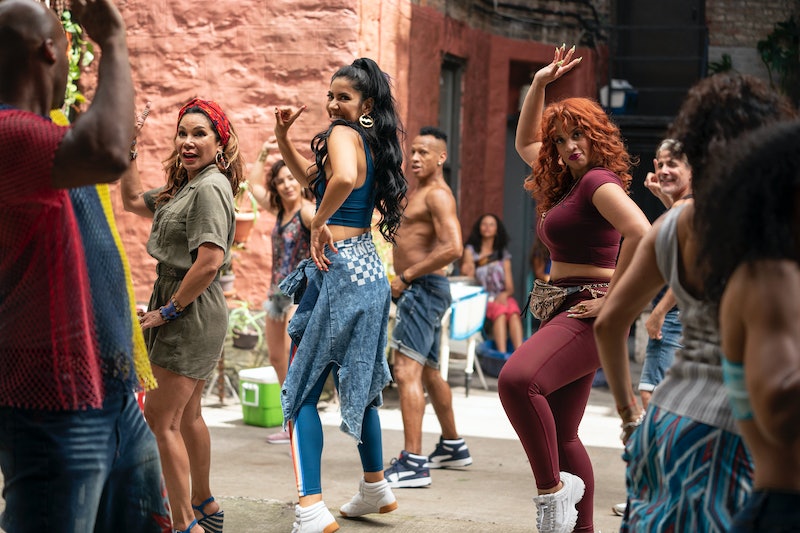 In the Heights creator Lin-Manuel Miranda has dreamed of seeing his musical on the big screen since 2008 — and now, it’s finally arrived. Helmed by Crazy Rich Asians director Jon M. Chu, the long-awaited movie is luscious and visually experimental, full of artistic choices that can only be pulled off onscreen. It’s a worthy adaptation of the buoyant, much-loved stage production.

That said, fans of the musical may notice that it’s not a scene-for-scene reproduction. Telling the story onscreen necessitated some important changes, and the creators also updated storylines and revised character arcs — all while keeping the core story faithful to the musical. So what are the biggest differences between the In the Heights Broadway show and the 2021 film? Check out nine big changes below. Be warned, mild spoilers for the In the Heights film follow.

Miranda took on the lead role in the original musical, and had hoped to do the same in the movie — but by the time production began, he felt he’d “aged out” of the part. Miranda still appears onscreen though, as the charming Piragua Guy. Hamilton’s Anthony Ramos, who played Usnavi in the 2018 Kennedy Center production of In the Heights, was cast as the lead instead. (That’s not the only Hamilton cameo: keep your eyes peeled for Christopher Jackson.)

In the musical, Vanessa (Usnavi’s longtime crush) makes appearances at Usnavi’s bodega, but audiences don’t learn much about her — aside from her dream of leaving Washington Heights to pursue a career in fashion design. In the film, we see Vanessa’s life, the apartment she wants to move into, and her creative process. It’s a fun change, particularly with actor Melissa Barrera playing the part.

And we don’t see as much from other characters.

To reduce the runtime, Chu and Miranda had to cut certain lines and songs. As a result, there are a few bits missing, and some moments were shortened — for example, the joke about how Usnavi got his name is told as a funny sight-gag, rather than through dialogue. We also don’t see much of the romance between Usnavi’s friends Benny and Nina, or hear as much from other side characters like Nina’s mother, Camila. Still, a lot of fan favorites still get their time to shine.

Certain lines needed to be updated.

References from the 2008 story were updated — like adding a nod to Deferred Action for Childhood Arrivals (DACA), which dates to 2012. Another important change? At one point in the musical, the ambitious Benny talks about his future plans: “I’ll be a businessman richer than Nina’s daddy; Donald Trump and I on the links, and he’s my caddie!” That line in particular didn’t age well. “When I wrote it,” Miranda told Variety, “he was an avatar for the Monopoly man. He was just, like, a famous rich person. Then when time moves on and he becomes the stain on American democracy, you change the lyric. Time made a fool of that lyric, and so we changed it.” The line now references Tiger Woods.

One of the characters is undocumented in the film.

In a similar vein, there’s a plot point that centers around a character’s immigration status, which didn’t feature in the musical. This impacts not just the character in question, but others, who soon find out their friend is undocumented — and try to help.

The pool scene was an addition.

To make the show’s song “96,000” more cinematic, Miranda and Chu planned to film it in an epic location. They found one in upper Manhattan’s Highbridge Pool, and the result is one of the largest, most complicated, and impressive numbers in the film.

The lottery ticket wasn’t a surprise.

Early on in the musical, Usnavi learns his bodega sold a winning lottery ticket worth $96,000. Amid much speculation, neighborhood matriarch “Abuela” Claudia reveals that she is the big winner, and that her lifetime of “patience and faith” have paid off. That’s not quite what happens in the film.

In the musical, Nina (considered by her community as “the one who made it out”) loses her scholarship due to bad grades. In the movie it’s ever-so-slightly different, but the changes make sense in context.

The ending looks farther ahead.

Usnavi’s plan to move to the Dominican Republic plays a more important role in the film — both at the beginning and end. He’s torn between staying in Washington Heights with his family and community, or starting a new life and fulfilling what would have been his parents’ dream. The movie finds a way to resolve the conflict in an incredibly sweet way.