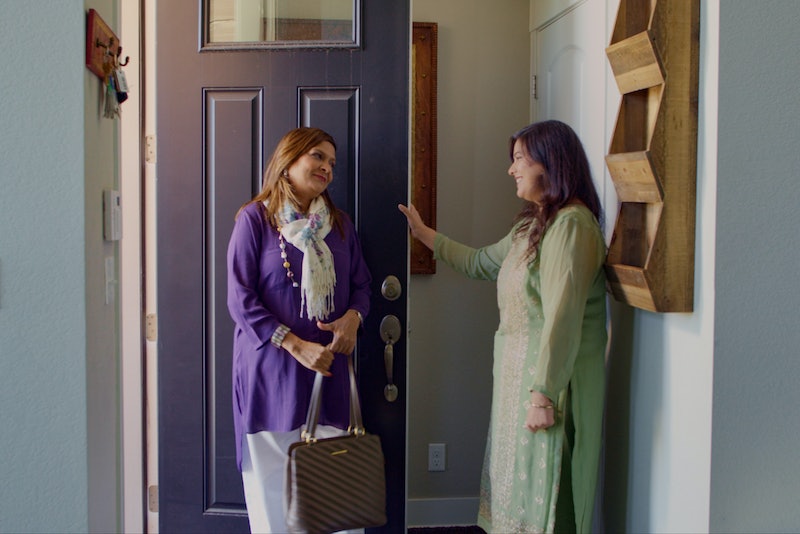 Since it arrived on Netflix on July 16, Indian Matchmaking has been at the center of plenty of difficult conversations about racism, colorism, and elitism. And the show's creator isn't just OK with the backlash, she welcomes it. In a new interview with CNN, Indian Matchmaking creator Smriti Mundhra revealed she's open to criticism about the series because she hopes that those conversations will encourage change.

The reality show centers on Sima Taparia, a Mumbai-based matchmaker who helps young Indian singles all around the world find the perfect partner. As part of her efforts, Taparia attempts to arrange marriages based on criteria that the singles and their families set for themselves, which has started conversations on social media about the privileges and biases that the people featured on the show have. Mundhra has seen those debates, and told CNN that she welcomes any and all critiques of the series. "I totally understand why people feel like 'You're exposing, some of them are problematic things that are in our culture,'" she told the outlet.

"But that's where we are. I would never want to make a show that sanitizes that because I think we need to have those conversations and we need to push to do better as a community and as a culture," Mundhra continued.

According to Mundhra, some of the elements that viewers have taken issue with — namely, issues of colorism and privilege — are just the result of having a difficult time getting people to sign on to the series in the first place. "Through the casting process we sort of pushed for as much diversity as possible. Geographically, ideologically, diasporically," she said. "We tried to really show, to whatever extent made sense and was authentic to the world, as many different points of view as we could." However, at the end of the day, they could only do so much. "It's difficult to sort of convince people who are very private about a process and private about their lives to sort of go through it with cameras on for a dating show," she explained. "But there were some people who were up for the adventure and they were the ones who were more keen to work with us."

Because Indian Matchmaking centers on an underrepresented group of people and showcases a process that isn't often depicted in pop culture, Mundhra thinks that much of the criticism comes from the Indian and Indian-American community itself. "There are very few [shows] that represent the South Asian experience, so I think we are looking for each one of them to represent a lot of the South Asian experience, when in fact we are a billion and a half people around the world," she said. "It is an extremely diverse culture and there is no one way to completely tell the story of South Asians and their relationship to anything, whether it's marriage religion or family."

Still, she's happy to hear whatever criticisms viewers have of the show or the matchmaking process. "Even for me as a creator and a producer, I need to push and be pushed to do better," Mundhra explained. "Hopefully the show sort of kicked a hornets nest and gets people thinking within themselves, talking within their own families and on social media. I think that will open the door for even more sorts of varied experiences and even more accountability."

More like this
Spencer Matthews’ Impressive Net Worth Expands Far Beyond Chelsea
By Sam Ramsden
Barney Walsh Has Been Linked With This Famous Miss World Winner
By Sophie McEvoy
Joey Essex Is Rumoured To Be Dating A 'Love Island' Favourite
By Sam Ramsden
'The Traitors' Is Officially Being Turned Into A Board Game
By El Hunt
Get Even More From Bustle — Sign Up For The Newsletter
From hair trends to relationship advice, our daily newsletter has everything you need to sound like a person who’s on TikTok, even if you aren’t.