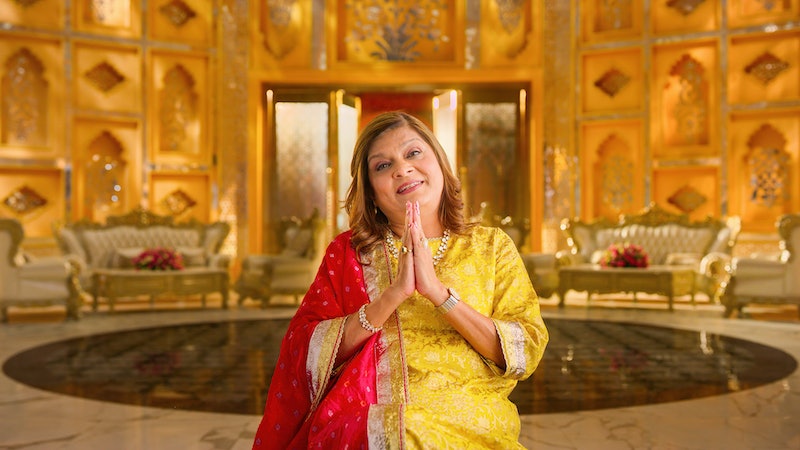 Months before Sima Aunty would even put her skills to the test in Indian Matchmaking Season 2, Netflix had already given her a vote of confidence. On March 24, the streamer announced they’d renewed Indian Matchmaking for a third season, which the company noted would be “coming soon.” Though Netflix didn’t share any more details at the time, the Season 2 finale’s last several minutes served as a sneak preview of what’s to come with the introduction of a new client — and Sima arriving at London’s Tower Bridge.

“The love I’ve gotten from the fans of the show has been wonderful,” Sima told Variety in July. “Matchmaking is my passion, and it’s a joy to share my work with audiences around the world.”

Not only did Netflix greenlight another installment of the Emmy-nominated series, but they also ordered a spinoff called Jewish Matchmaking, which will feature “singles in the U.S. and Israel as they turn their dating life over to a top Jewish matchmaker.”

Needless to say, there is plenty of matchmaking content ahead, but first, here’s everything we know about Indian Matchmaking Season 3 so far.

While it remains to be seen which stars might return for Season 3, the newly introduced cast member is Priya. In the Season 2 finale, Priya explains at a dinner party with friends that she hasn’t “even bothered trying” to date anyone lately, though she has a particular image of what her ideal partner might look like. Among her sartorial deal-breakers are dragon shirts — “Back in the day, there was a look,” she insisted. He also can’t have obviously groomed eyebrows.

On the flip side, “hair is quite important,” and she loves a topknot. Priya’s other physical requirements include someone “youthful looking,” at least 6 feet tall with a nice smile, and one ear piercing. “I don’t ask for too much. I don’t think I ask for too much at all,” Priya said in one scene, after describing her own flaws being her rigidity and that she “might jump to conclusions sometimes.”

Though it seems clear that Sima Aunty will be traveling from Mumbai to London to help Priya find love, Netflix has yet to announce additional Season 3 filming locations. The second season featured Sima’s global clients in India and across the U.S. in states such as New York, New Jersey, Ohio, Florida, and North Carolina.

After premiering in July 2020, Indian Matchmaking took a more than two-year hiatus before returning in August 2022. Given the early renewal and season finale tee-up, fans won’t have to wait nearly as long for Season 3. On Sept. 22, Netflix announced that Indian Matchmaking Season 3 would debut in spring 2023.

This post will be updated as more Indian Matchmaking Season 3 details become available.

More like this
‘The Ultimatum: Queer Love’ Is Officially On The Way
By Radhika Menon and Kadin Burnett
You Can “Fall In Love” At The Resort Where Bachelor In Paradise Season 8 Was Filmed
By Brad Witter
Netflix's 'Bling Empire' Season 3 Trailer Includes A 'Selling Sunset' Cameo
By Kadin Burnett and Sam Ramsden
The 'Love Is Blind' Season 3 Teaser & Release Date Are Here & The Cast Is "All In"
By Kadin Burnett and Grace Wehniainen
Get Even More From Bustle — Sign Up For The Newsletter

This article was originally published on Aug. 10, 2022