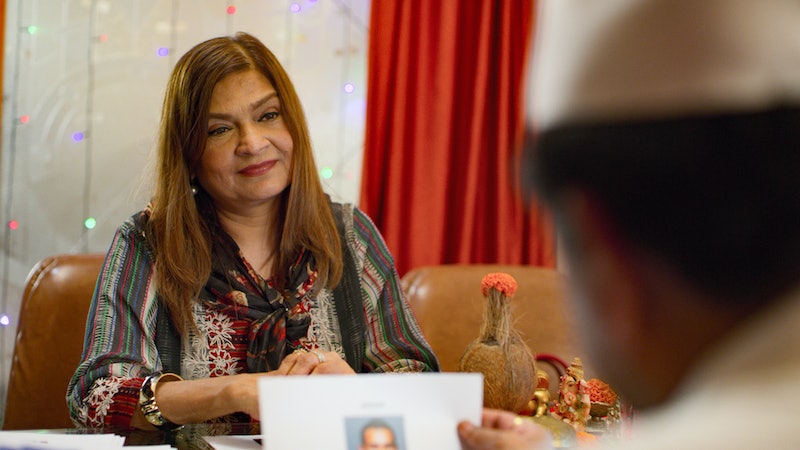 The long awaited second season of Indian Matchmaking finally landed on Netflix recently and it’s exactly what we wanted from the popular dating series: packed full of drama, romance, and new faces. The magic touch of matchmaker Sima Taparia, commonly known as Sima Aunty, has truly struck again. Well, for some of her clients anyway. The first seasons of Indian Matchmaking have been set mainly in the U.S. but the last few moments of the Season 2 finale revealed that us Brits will finally be getting in on the matchmaking magic. We’re shown a new cast member in London, Priya, as well as Sima landing in London and arriving at Tower Bridge. So who is Priya and what do we know about her so far?

In short, not very much. What we do know is that 35-year-old Priya Ashra is based in North London and works as a private chef and supper club host, regularly hosting the Tiku Tiku Supper Club. Her Instagram — @priya.ashra — also documents a lot of travelling, hanging out with family and friends, and the occasional throwback photo, of course.

And we also know the current situation surrounding Priya’s dating life and what she’s looking for in a partner. In the finale episode, we see Priya hosting a dinner party with some friends where she’s explaining how tired she is of dating and isn’t “even bothered trying.” But she does know what she’s looking for in the ideal partner. Jokingly, she tells her friends “no dragon shirts” (I have to agree TBH) but also mentions that she doesn’t want someone with obviously groomed eyebrows.

Priya also loves a guy with a topknot, one ear piercing, a nice smile, and who is at least 6 foot tall. And “youthful looking.” She went on to say in the episode, “I don’t ask for too much. I don’t think I ask for too much at all.” But she’s not one to not acknowledge her own flaws which she described are her rigidity and that she “might jump to conclusions sometimes.” One thing I know for certain? That I can’t wait for Season 3 of Indian Matchmaking.

More like this
Here’s When You Can Expect More ‘Indian Matchmaking’
By Brad Witter
‘The Ultimatum: Queer Love’ Is Officially On The Way
By Radhika Menon and Kadin Burnett
Here's When 'The Crown' Season 5 Will Premiere — And What To Expect
By Bustle Editors
Ed McVey Shares A Surprising Connection With Eddie Redmayne
By Catharina Cheung
Get The Very Best Of Bustle/UK