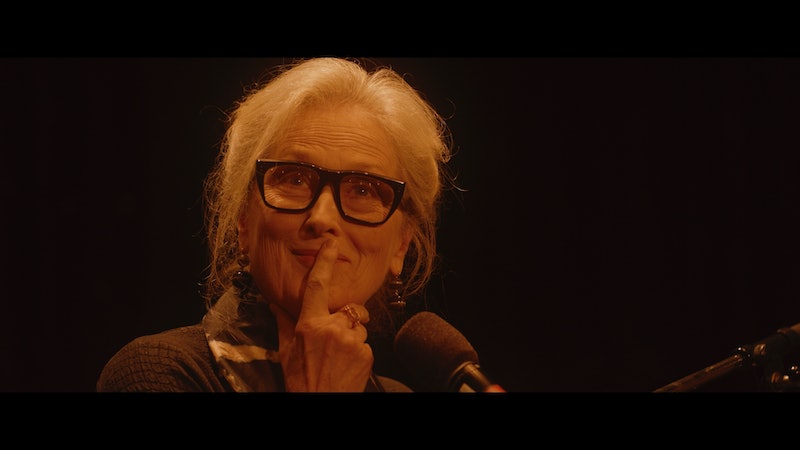 In Steven Soderbergh's latest film, Let Them All Talk, Meryl Streep plays a successful author named Alice Hughes who takes a cruise across the Atlantic Ocean to accept a prestigious literary award in England. Along for the trip she brings her two oldest friends, Roberta (Candice Bergen) and Susan (Dianne Wiest), as well as her nephew Tyler (Lucas Hedges). Her agent Karen (Gemma Chan) also joins in and though Alice tries to use the time to finish her latest manuscript, the journey really becomes about addressing unresolved friendship conflicts.

At its core, the film centers on Alice Hughes, a fictional character devised by director Steven Soderbergh, producer Gregory Jacobs, and the film's screenwriter Deborah Eisenberg. After coming up with the premise of the film, the press notes detail, Soderbergh reached out to Streep, with whom he had worked on The Laundromat, to play the lead character. After Streep agreed, Eisenberg (a short story author herself) was tasked with creating the backstory and further developing the characters.

"I described what we were going to do," Soderbergh says in HBO's press notes about his initial idea. "I suggested [to Deborah], 'Why don’t we just start talking and emailing back and forth? We'll just build this character by character and plot point by plot point and see how it goes." Beats and scenes were outlined, but no real script was put together, allowing for the cast to improvise their dialogue.

Streep was then able to develop the character of Alice her own way as well. "Alice is a purist who feels undervalued, or maybe underestimated in the literary world. She is that tortured soul, the 'wannabe' intellectual, whose recognition in her field rises only as high as the middle brow," Streep shares in the press notes. "She has fans; she just wishes they were smarter. She is at a crossroads (or should I say, crossing of the ocean) of her life. She is receiving an important international award but at a fraught time... [however] Alice is filled with regrets, aspirations, half-hearted resolutions, undeniable passion and curiosity and love and resentments."

Streep added more insight when chatting with Entertainment Weekly. She calls Alice a rara avis, or "rare bird." "She's a really weird bird. A real intellectual, which I am not. People like that sort of intimidate me," Streep told the outlet. "So it's great fun to imagine what it'd be like to have those standards of thought, and those aspirations, and to have a poetic soul, which I think she did, and the selfishness of real, true artists. People that don't have kids and concerns that pull them into the real world. People that have been able to just live in the sort of miasma of their own imagination and anxieties and terrors. That’s her, and at this particular moment of her life, especially so. Her regrets and her desires to figure things out — it's stuff you can relate to after 70, certainly, if you're lucky enough to get there."