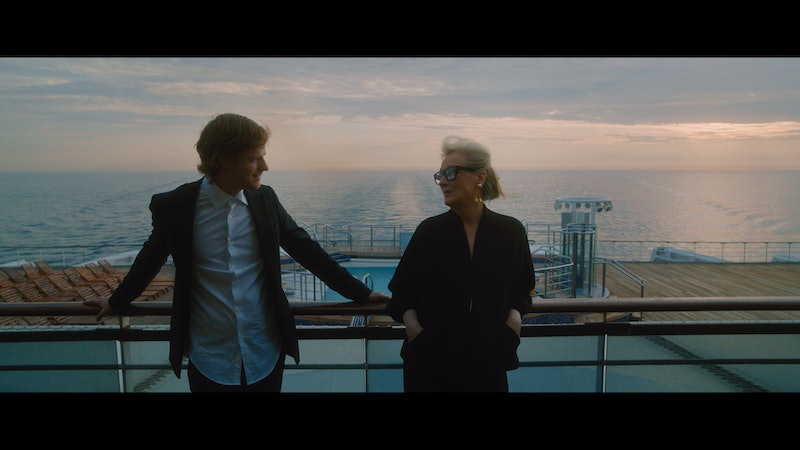 Unconventional films and TV shows have been popping up throughout 2020 as filmmakers and creators have been trying to make the best of the limitations of a global pandemic. Movies and TV shows have been shot in quarantine bubbles, on Zoom, and in isolated pods. But Steven Soderbergh's Let Them All Talk takes unconventional to a new level. Though it was filmed before the pandemic hit, Let Them All Talk, which premieres on HBO Max on Dec. 10, was filmed on a somewhat extreme and unorthodox set: on the decks of a cruise ship during an actual voyage across the sea.

Let Them All Talk stars Meryl Streep as a successful author named Alice Hughes. In order to accept an award in England, she boards the Queen Mary 2, a luxury cruise ship, for a two week journey across the Atlantic Ocean. She brings along her nephew Tyler (Lucas Hedges), and her two oldest friends, Roberta (Candice Bergen) and Susan (Dianne Wiest) as her guests. Her agent Karen (Gemma Chan) also takes the cruise, as Alice tries to finish up her latest manuscript and also revisit some of the old issues looming over her relationship with Roberta and Susan.

According to the film's press notes, director Steven Soderbergh and producer Gregory Jacobs first reached out to Streep about the idea of filming on the seas. Streep quickly agreed and then came the reality of figuring out how to actually shoot a movie on a functioning cruise ship in the two weeks it took to cross the Atlantic. They decided to film in chronological order, and with a backbone of a script written by Deborah Eisenberg, the actors improvised their lines and conversations to create and even more raw and real feeling.

Jacobs locked in their voyage dates and worked with the Cunard Line on when and where they could shoot, as outlined in the press notes. The production was instructed to avoid disrupting the trip for actual paying customers. But it was also necessary to have other passengers in scenes at various bars, the dining room, or out on the deck. "We made being in the film an activity that passengers could sign up for during the crossing," Jacobs says.

It ultimately became a creative challenge that the women of the film delighted in. "We had to dress up every night, because on the Queen Mary, if you go into the main room, you have to be formal," Wiest told Entertainment Weekly. "It was wonderful. You never saw such a good-looking director and crew. The sound man was in tux, the boom man was in tux, Steven was in tux, the crew was all in tux."

Bergen also told the outlet, "The boat is very much a character in the movie. It was a magnificent ship. Truly, the most beautiful ship I've ever seen. And beautifully maintained. We’d come in late at night, and they were polishing the railings. Not a stone unturned."

Being on a cruise ship also meant bare bones production equipment. "The only equipment was sound equipment," Wiest added. "Steven held the camera in a wheelchair and just rolled along. None of the lights, and the trucks, all that stuff that goes into making movies, there's none of it. There was Steven and this new camera."

The result is a fully immersive ride along on the Queen Mary 2, and a deep journey into these women's complicated friendships.