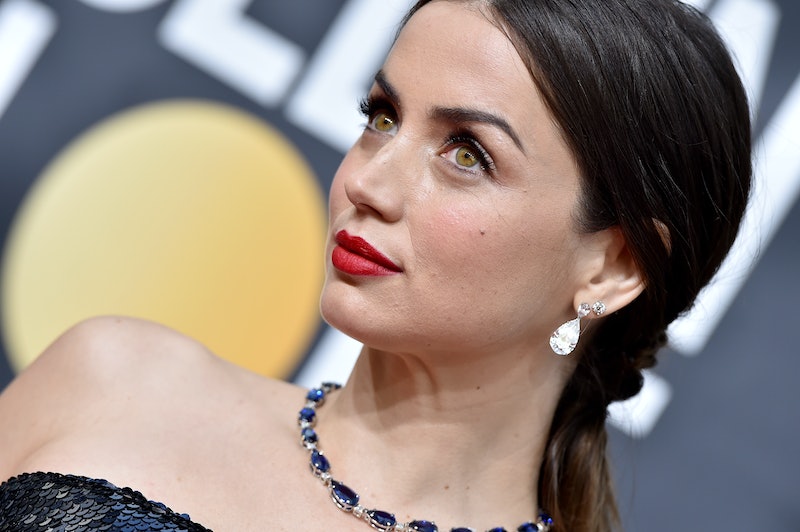 Ana de Armas' breakout turn as caretaker Marta Cabrera in Knives Out may have made her a household name in America, but the Cuban actor's career actually began at age 14. With roles as a Bond Girl in No Time To Die and pre-Marilyn Monroe Norma Jeane in Blonde in her future, she'll be playing some of the most larger-than-life women on screen. So fans may naturally be wondering if Ana de Armas dating anyone in 2021, and it turns out she's newly single after breaking up with Ben Affleck, according to People.

After de Armas, 32, was first linked to Affleck in early 2020 while filming their upcoming thriller Deep Water in New Orleans, the magazine reported via a source on Jan. 18 that the pair had split. "She broke it off,” an insider revealed of de Armas. “Their relationship was complicated. Ana doesn't want to be Los Angeles based and Ben obviously has to since his kids live in Los Angeles."

A second source close to the former couple insisted that the breakup was mutual and “completely amicable,” explaining they were just at different points in their lives. "There is deep love and respect there," said the insider, adding that "they are both happy with where they are in their lives."

Affleck and de Armas first sparked dating rumors in March 2020 while vacationing together both in her native Cuba and then Costa Rica. She eventually confirmed their relationship in April, posting Instagram photos of them celebrating her 32nd birthday together. According to People, the Knives Out actor even moved into Affleck’s Los Angeles home in August.

Prior to her relationship with Affleck, de Armas had kept her dating life largely private. Although she never publicly confirmed the romance, de Armas reportedly dated talent agent Franklin Latt in 2015. She did post a sweet Instagram photo on Latt's birthday, however. "HAPPY BIRTHDAY mi Amor. I love you more than anything. You are the best friend, boyfriend, and human being in the world," the actor reportedly captioned the since-deleted post.

When it comes to her personal life, de Armas seems to greatly value her privacy. "I've had company here, but it's been the wrong company so I prefer to be alone," she told Vanity Fair in March 2020 about dating in Hollywood. "For anyone who ever questions how did I get to do this or that, f*ck them...They are not the people I share my happiness with. All I want to do is get something challenging and prove to myself that I can do it."

Before coming to Los Angeles, de Armas was briefly married to fellow star and male model Marc Clotet from 2011-2013. The couple kept their relationship very quiet. Even as rumors swirled about their separating, it wasn't until the 2013 Goya Awards that Clotet, who came alone, confirmed the relationship had ended. At the time, he added that they were “still friends," however.

Given her tight-lipped track record, de Armas likely won’t be discussing what happened between her and Affleck, so fans will just have to focus on her work and career. And that seems to be just the way she would like it.

This article was originally published on Feb. 25, 2020