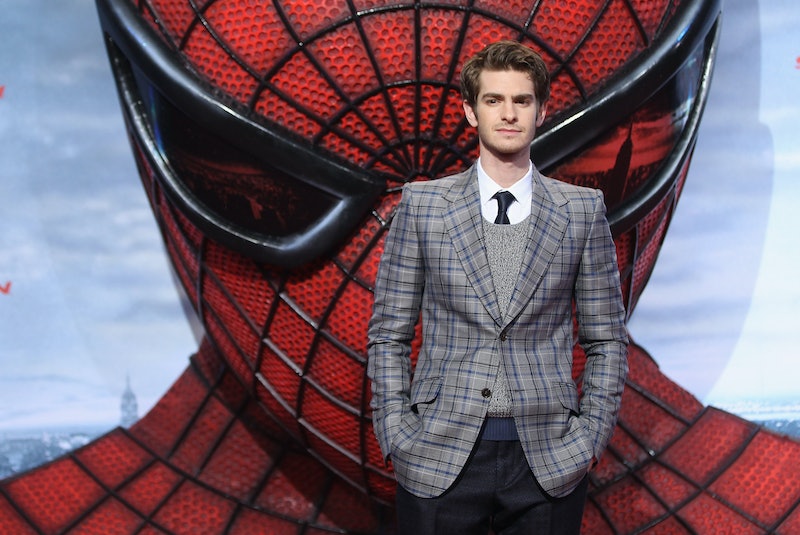 Andrew Garfield was — and still is? — Spider-Man. The actor helmed the second iteration of Sony’s Spider-Man franchise with 2012’s Amazing Spider-Man and 2014’s Amazing Spider-Man 2, swinging headfirst into the complicated life of Peter Parker as he tried to navigate high school, relationships, and villains in New York City. Spoilers follow for Spider-Man: No Way Home.

When the latest Spidey film, Spider-Man: No Way Home, debuted on Dec. 17, fans confirmed what they had long suspected: that Garfield returned as the famed web-slinger in the new movie. Rumors about whether or not Garfield and Tobey Maguire, who played Spider-Man from 2002 to 2007, would appear in the upcoming Sony/Marvel film began swirling back in October 2020 after FandomWire reported that the pair would reprise their roles. In response, Sony Pictures told ET Canada that the rumored castings were “not confirmed.” Present-day Spider-Man Tom Holland also denied Garfield and Maguire’s involvement in the film. “It would be amazing if they were because they haven’t told me that yet and I am Spider-Man,” he told Jimmy Fallon in February. “I’ve read the script from the beginning to the end so it’ll be a miracle if they could’ve kept that from me. At the moment, there is no cameo from the two boys.”

Garfield, too, repeatedly stated that he would not appear in the movie. The actor — who recently starred in high-profile movies The Eyes of Tammy Faye and tick, tick... Boom! — denied any and all involvement in the film. Instead, he told Jimmy Fallon that “if [Sony and Marvel] want to give me a call at this late, late stage in the game,” that he would be available. ‘I’m sitting here in my track suit,” he said.

Despite these sentiments, the casting rumors continued to gain traction online — largely because the trailers for No Way Home revealed that villains from previous Spider-Man movies, including Jamie Foxx is returning as Electro and Alfred Molina as the metal-tentacled Doctor Octopus, would be featured in the new movie. It also made sense that multiple versions of Spider-Man could exist at once given Marvel’s rapidly expanding multiverse — if there’s only space for one Spidey in a given universe, there’s a lot more flexibility with a multiverse. And as it turns out, these dogged Marvel fans were correct: Holland, Sony, and Garfield were lying the whole time.

Now that the truth is out, it’s pretty funny to look back at all of Garfield’s false denials. Below, relive them in all their glory.

1. He Recommends “That You Chill.”

Garfield was first asked about his involvement in No Way Home on the Happy Sad Confused podcast. He acknowledged the rumors circulating on social media, but called the idea of his alleged cameo “f*cking hilarious.” Putting his hands to his face, he remarked: “I wish I could just be able to speak to everyone and say: ‘I recommend that you chill.’” However, Garfield stated that he couldn’t “speak for anything else” in the film apart from his involvement, adding that “they might be doing something but ain’t nothin’ — I ain’t got a call.”

2. He “Closed The Book” On Being Spider-Man.

In an interview with Entertainment Tonight, Garfield was once again pressed on the potential return of his version of Peter Parker. “Again, I feel like I’m in a game of Werewolf and I’m just saying, ‘I’m not the werewolf!’” he exclaimed. “I’m not the werewolf, I promise you guys. I’m not the werewolf.” He reiterated that he hadn’t “received a phone call” and mentioned that he thought “what people are talking about is a really cool idea” for a film. When asked if he’d ever be interested in reprising the role in the future, Garfield’s response was frank. “It’s not something I’ve ever really thought about, because I closed the book on it for myself,” he revealed. “I haven’t had need to think about it, so it’s not something that I really considered. That’s my honest answer.”

Garfield shared a similar viewpoint in an interview with Access and called the rumors surrounding the upcoming Marvel film “a really cool idea.” He also expressed his hatred of “being given the responsibility of disappointing people” by letting fans, who are highly anticipating his return as the superhero, know he isn’t part of the film. However, he did offer a silver lining. “It’s not something that I’ve been asked about or anything like that but, you know, never say never,” he said. “But, in the meantime, no.”

4. “This Is Not Something I’m Aware I Am Involved In.”

As part of his September 2021 cover story in Variety, Garfield opened up about the casting rumors, revealing how he could “understand why people are freaking out about the concept” of the film, because he’s longtime Spider-Man fan himself. “You can’t help but imagine scenes and moments of ‘Oh, my God, how fucking cool would it be if they did that?’” he said. “But it’s important for me to say on the record that this is not something I’m aware I am involved in.”

Although he refuted any claims that he’ll step into the Spidey suit once again, he understood that fans who are well-versed in Marvel and the studio’s highly confidential filmmaking process likely wouldn’t believe him. “I know I’m not going to be able to say anything that will convince anyone that I don’t know what’s happening. No matter what I say, I’m f*cked,” he said. “It’s either going to be really disappointing for people or it’s going to be really exciting.”

Speaking with Newsweek, Garfield stressed that if moviegoers went into No Way Home expecting to see him it would be “very disappointing” for them. “I do know what’s going on and I’m afraid it’s going to be very disappointing for people,” he said. Instead, he’s trying to let that future disappointment roll off of his back. “But that’s — what can I do? I have to let people be disappointed. That’s a big part of my recovery in my life is I have to allow people to have their own feelings. I can’t mitigate or control anyone else’s experience. That’s a practice of mine.”

Garfield found himself trapped in a web of intrigue in an interview with Jimmy Fallon on Sept. 13, when Fallon asked him about a since-deleted photo of him and Tobey Maguire on the set of No Way Home that was floating around on the internet. At the suggestion of his inclusion, Garfield appeared inquisitive, raising an eyebrow and asking, “You’re sure about that?”

When Fallon doubled down on the claims and told Garfield that he was going to be in the upcoming film, he appeared shocked. “What!? “I had no idea,” he yelled. Garfield pressed Fallon on the photo, and when the late night host shared that the photo had been scrubbed from the internet, he loudly guffawed, “Oh, how convenient, Detective Fallon!”

Eventually, Garfield raised his hands and admitted that he had “heard about it” and seen the photo, but he claimed that the image was “a Photoshop!” When the audience seemed to disagree with his claims, he remarked that he was “trying to manage expectations.”

In addition to refuting any “photoshopped” imagery, Garfield revealed that he was “excited” for No Way Home and that Tom Holland was “just the perfect Peter Parker.” He also revealed one of the biggest perks of not being part of the Spider-Man universe: getting to enjoy the films as a fan. “To be able to sit in the audience and just kind of go, ‘Yeah, you screwed up mate, you didn’t do it as well as you could’ve done.’ I get to be that guy that’s like, ‘Yeah, I don’t really love the suit,’” he said, jokingly. “I get to be that person, which is much more fun.”

More like this
New Details About Jeremy Renner's Snowplow Accident Reveal The Actor's Intentions
By Sam Ramsden
Twitter Is Overjoyed By Angela Bassett’s Record-Making Oscar Nomination
By Maxine Harrison
Selena Gomez Confirms She's Single Amid Drew Taggart Dating Rumors
By Martha Sorren, Jake Viswanath and Jack Irvin
Reese Witherspoon Confirms This Fan Favorite Will Return For 'Legally Blonde 3'
By Jake Viswanath
Get Even More From Bustle — Sign Up For The Newsletter
From hair trends to relationship advice, our daily newsletter has everything you need to sound like a person who’s on TikTok, even if you aren’t.

This article was originally published on Sep. 24, 2021