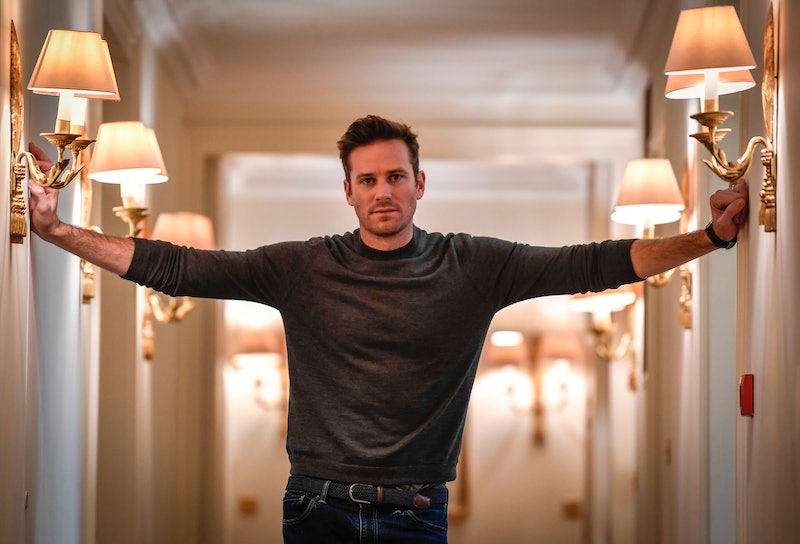 Trigger Warning: This piece contains mentions of prior allegations of sexual assault. Armie Hammer is reportedly working a surprising new job — but it’s not as a hotel concierge. On July 6, writer and producer Muna Mire shared a photo on Twitter of a flyer from Morritt’s Resort in the Grand Cayman Islands, which claimed that Hammer was working as a concierge for the resort, but turned out to be a prank. However, according to TMZ, the actor is working in the Cayman Islands after facing sexual assault accusations and disappearing from the public eye in 2021.

On July 9, TMZ reported that Hammer was working as a timeshare salesman, publishing photos from late June of him sitting at a desk with a couple (whose faces are blurred out) and apparently going over pricing for a unit. A prospective buyer told the outlet that “Armie was outlining a plan that would cost $2,020 per week,” or as the actor reportedly put it in his sales pitch, “only about $21,000 for 10 years of vacations.” Mire wrote in her since-deleted tweet that Hammer was the personal concierge for her friend’s parents on their trip, but perhaps he was just trying to sell them a part-time vacation home instead.

According to The Cut, the prank was crafted by a resort employee who happens to be friendly with Hammer. “Armie plays golf with one of my staff,” Morritt’s sales manager Christopher Butcher told the outlet. “He came down for the day to see what we do.” During his visit, the two “were messing around” and decided to put out a flyer with Hammer’s face “to see if he would get more clients coming in.”

Even though it was just a prank on hotel guests, it’s paying off in spades for Morritt’s Resort, as they had more inquiries about Hammer’s employment than they had ever received in a day. “You can’t pay for this publicity,” a representative of the resort told Entertainment Weekly. While the post has since been deleted, Twitter still went wild over the idea that the troubled actor was now giving recommendations to tourists.

Hammer has been keeping a low profile since March 2021, when the Instagram account “House of Effie” anonymously published allegations of sexual assault against Hammer. Later that month, a woman named Effie came forward in a press conference, accusing the actor of sexual and physical abuse over a four-year period. In response, Hammer’s attorney said that his sexual encounters were “completely consensual, discussed and agreed upon in advance, and mutually participatory.” As a result, he was dropped from several projects, including a Broadway production of The Minutes.

The rumors about Hammer working as a concierge on the Cayman Islands weren’t entirely unbelievable, given how he grew up on the tropical locale and was reportedly living there for most of 2020. Most recently, he was seen flying into the Grand Cayman airport in May 2021 to check into a rehab center following the abuse allegations.

More like this
Dakota Johnson Shocks With Armie Hammer Cannibalism Joke At Sundance
By Radhika Menon
Jennifer Coolidge Hunted For Jewels & Lashes In J.Lo’s Hotel Room
By Jake Viswanath
New Details About Jeremy Renner's Snowplow Accident Reveal The Actor's Intentions
By Sam Ramsden
Jennifer Coolidge Recites “Jenny From The Block” Beside J.Lo In Her First TikTok
By Jake Viswanath
Get Even More From Bustle — Sign Up For The Newsletter
From hair trends to relationship advice, our daily newsletter has everything you need to sound like a person who’s on TikTok, even if you aren’t.

This article was originally published on July 7, 2022