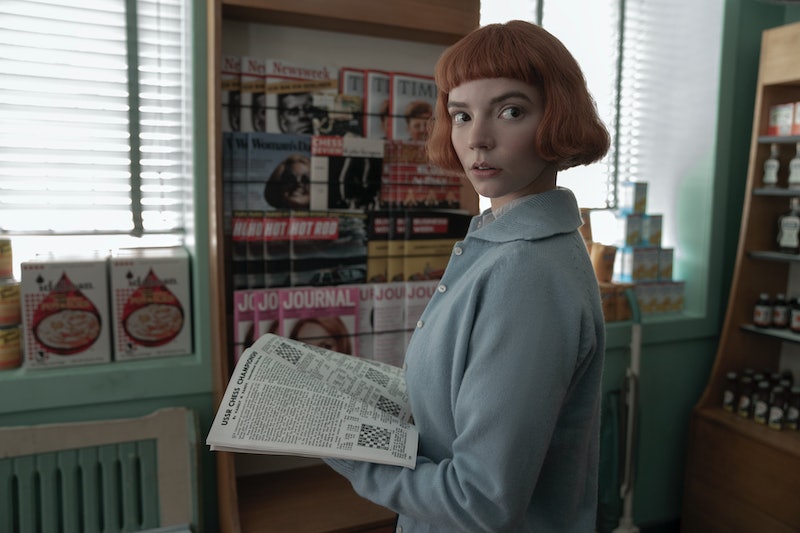 Netflix is resurrecting the classic chess prodigy archetype for its new miniseries The Queen's Gambit, starring Anya Taylor-Joy as an amazing young player. As her character, Beth Harmon, works to earn the title of Grandmaster, there are glimpses of inspiration drawn from a number of real-life chess masters, including the legendary Bobby Fischer. But Beth isn't based on any one person in specific.

The limited series adapts Walter Tevis' 1983 novel of the same name. The late writer, who died in 1984, enjoyed chess himself, so it's not surprising that his protagonist is similar to some of the game's greatest players. In the author's note for the novel, Tevis mentions three of his chess heroes in particular — Fischer, Boris Spassky, and Anatoly Karpov — calling their play "a source of delight to players like myself."

Of the trio Tevis named, Fischer is the one whom Harmon most obviously resembles. Some reviewers, like Rolling Stone's Alan Sepinwall, have made that comparison, and it's not hard to see why. Both are 20th-century American chess prodigies who become champion competitors at a young age. Both develop a famous rivalry with a Russian world champion. And both were speculated to have lived with mental illness.

However, as Tevis states in his author's note, "The Queen's Gambit is a work of fiction." While he did get some help from players in his research on the novel, Beth is a character of his creation. In fact, he managed to put a little of himself in her, just as he did many of his other protagonists.

"Walter Tevis was an underdog who beat the odds," his son, Will Tevis, wrote in the Stanford University blog The Book Haven. "The characters that he created – Eddie Felson, Jerome Newton, and Beth Harmon – all had an internal drive that launched them to overcome unbelievable odds, but still not live happily ever after. Walter Tevis was the struggling underdog, too. He overcame inner demons to win in his literary field, only to die far short of a satisfying life."

Perhaps Beth's story will get a happier ending.

More like this
The 'Reasonable Doubt' Cast Includes A 'Save The Last Dance' Reunion
By Grace Wehniainen
Caleb McLaughlin Details Racism From 'Stranger Things' Fans
By Radhika Menon
'The Rings Of Power' Episode 6 May Reveal Sauron’s Identity
By Grace Wehniainen
Mike Flanagan Teases 'The Midnight Club' In This Exclusive, Creepy Clip
By Grace Wehniainen
Get Even More From Bustle — Sign Up For The Newsletter