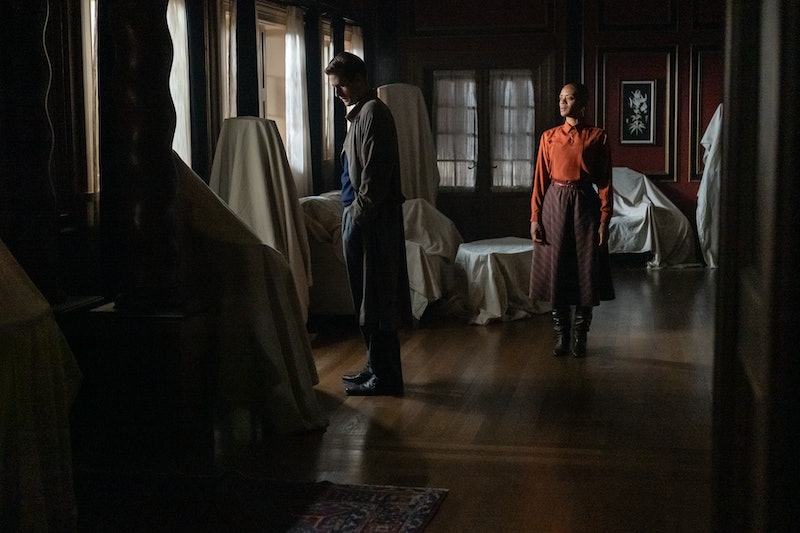 Following last year's The Haunting of Hill House, Netflix is once again taking viewers inside a haunted mansion. This time it's Bly Manor, which actually may have been inspired by a real place. Enter if you dare.

Season 2 of the horror anthology series, The Haunting of Bly Manor, is based on Henry James' 1898 novella The Turn of the Screw. Victoria Pedretti (who played Nell Crain on Hill House) stars as Dani, an American governess who begins caring for two orphaned children at an English estate only to begin seeing apparitions. According to the New York Times, the story is believed to be inspired by a supposedly haunted manor called Hinton Ampner in England. The mansion is now part of the UK's National Trust, which has documented the alleged supernatural sightings there at length. According to the National Trust's website, a woman named Mary Ricketts lived in Hinton Ampner in the late 1700s and kept a journal of her ghostly encounters. Ricketts claimed that she, her family, and their staff would regularly hear doors slamming, footsteps, and groans and shrieks in the night. Some staffers also reported seeing a woman in a silk dress running through the home as well as a strange figure in a dull-colored coat.

After several years of this, the Ricketts family moved out, but the sounds and sightings allegedly continued, prompting the property to be torn down in 1793. Afterward, a small box with a skull inside was found under the house.

A second mansion, also named Hinton Ampner, was later built on the same property. In non-COVID times, you can visit the home in Hamphhire. It looks much less terrifying than the mansion in Haunting of Bly Manor — at least in the daylight.

The Netflix series was filmed in Vancouver, Canada — not England — but the show's PR team is already leaning into speculation about whether Bly is a real place. A recently posted Zillow ad for Bly Manor boasts a "mesmerizing lake" and "antique doll collection in the basement." The photos show creepy footprints in the hall and abandoned shoes by the lake, so perhaps it's for the best that the home is "off the market" even through it's been listed on Zillow for an "eternity." And even once travel reopens, you probably won't want to book a trip to Hinton Amper anytime soon.