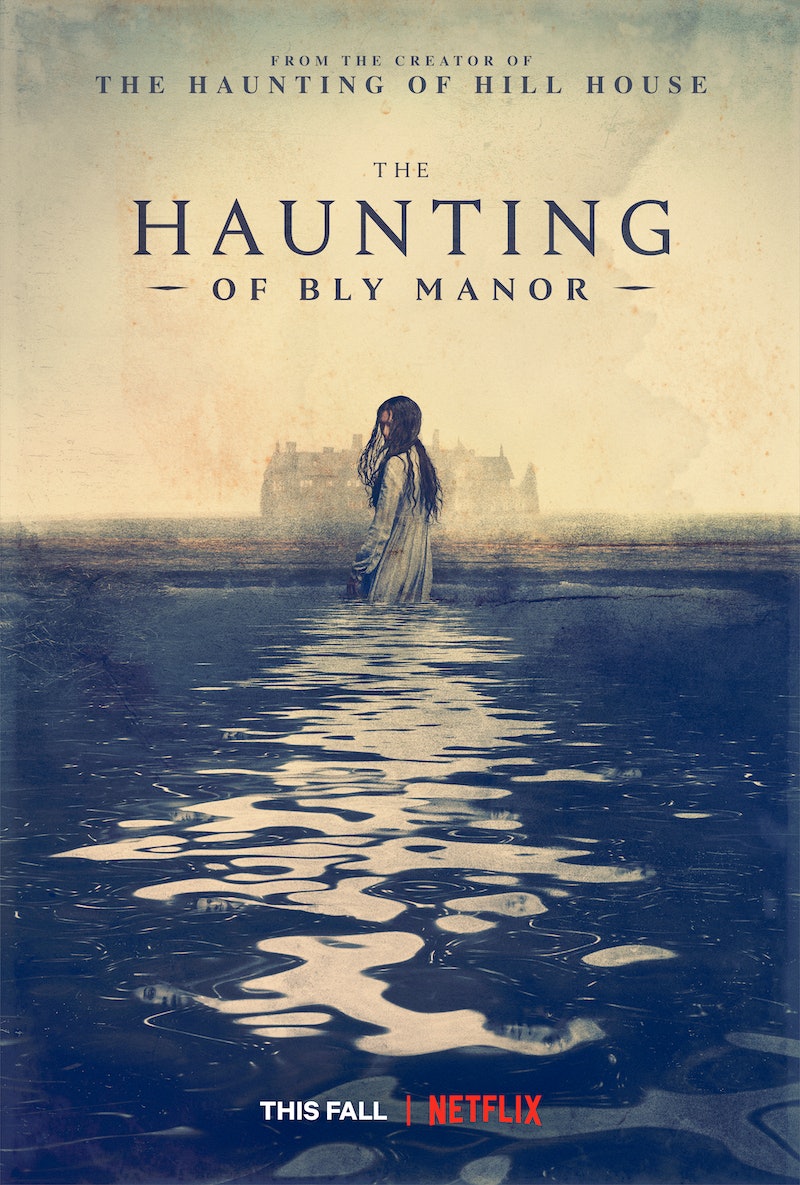 It's hard to believe that there once was a Netflix show more nightmare-inducing than the year of 2020, but The Haunting of Hill House remains one of the most terrifying Netflix originals ever. Now, 2 years after the season aired, Netflix has released a first look at The Haunting of Bly Manor, the follow up to the anthology series' hit Season 1, and teased the season's release date sometime this fall. Given the creepiness factor of these photos, it might just be giving the horrors of 2020 a run for their money.

The photos, released Monday, Aug. 23, give fans their first look at Bly Manor, the new haunted house setting for the show. Based on Henry James' The Turn of the Screw, Bly Manor will follows an American tutor who unwittingly takes a job at a beautiful mansion plagued with secrets. "It's this idea that the world we're presented with has all of the answers, but it has hidden meanings and has clues that would help us understand it differently, if we were able to see them," teased Haunting showrunner Mike Flanagan, speaking to Vanity Fair on the themes fo the new season.

In a series of three tweets, Haunting of Bly Manor teased the season would present "A new home," "A new family," and "A new story," but the photos also showcase some familiar faces. Victoria Pedretti, Oliver Jackson-Cohen, and Henry Thomas — who played key members of the Crain family in Hill House — are all back, and looking more depressed than ever. Their concerned looks might seem familiar, but this time around they're playing very different characters. (Kate Siegel, who played Theo in Hill House, will also star, but her character is being kept under wraps.)

Pedretti, for example, is playing Dani Clayton, a tutor who takes a job at Bly Manor to look after orphans Miles, 11, and Flora, 9. She's a far cry from Hill House's Nell, who was followed by tragedy and death. According Flanagan, differentiating the two characters was paramount, and had a lot to due with the change in setting — Bly Manor takes place in 1987 — and circumstance. "Between the setting in the '80s, and this idea of a young American abroad, just out on an adventure, it brightened everything up to begin with," he explained. Meanwhile, Henry Thomas will play a mysterious Henry Wingrave, uncle to the orphans, and Jackson-Cohen plays Peter Quint, a villain with connections to the Wingrave family.

The first look photos also teased new characters played by Amelia Eve, T'Nia Miller, Tahirah Sharif, and iZombie's Rahul Kohli. But, most importantly, they might provide a critical clue for fans. According to Flanagan, the dolls in Bly Manor will be key in understanding the show. "The more attention a viewer focuses on Flora's dollhouse," he teased, "the more they're likely to see what's happening and why."

Ah, yes, because the only thing missing from 2020 is the idea of haunted dolls.