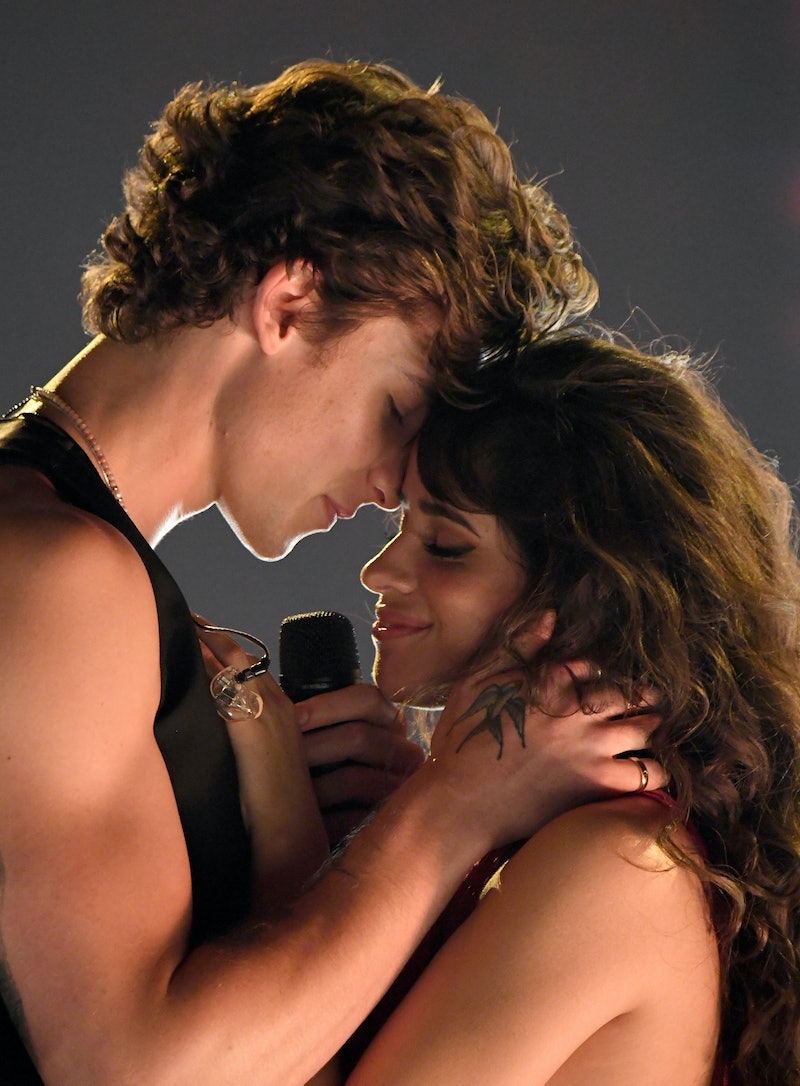 Shawn Mendes fans need wait no longer. The star's highly-anticipated documentary is now available to stream on Netflix. But Shawn Mendes: In Wonder doesn't just focus on Mendes; along for the ride throughout the film is Mendes' longtime romantic partner, singer Camila Cabello. Appearing alongside Mendes, Cabello helps shed light on who her partner truly is — on and off the stage.

Center to the documentary is Mendes' 2019 worldwide tour titled Shawn Mendes: The Tour. It touches on all the trials and tribulations that come with performing on such a rigorous schedule — a schedule so rigorous that the singer contracted laryngitis, forcing him to cancel a tour appearance in Brazil. The documentary even shows the highly emotional moment leading up to his announcement of the cancellation on Twitter, which was met with enormous upset from fans.

But the documentary doesn't just focus on the tour. It also follows Mendes as he opens up about his personal life, and, more specifically, his relationship with Cabello. In one interview in the documentary, Cabello dives into how she and Mendes first met, opening for Austin Mahone on his 2014 tour. She also reveals that they met again backstage at Taylor Swift's 1989 tour and, while there, immediately started writing "I Know What You Did Last Summer." (Their collaboration that garnered much attention for both of the young musicians.)

In an incredibly sweet reflection, Mendes also shares the story about the moment where he admits every song he's ever written was about Cabello. As ET Online reports, "My song comes on the radio or something and the fact comes up that it's about her. I'm like, ‘Yeah, it's about you. Everything's about you. They've always been about you." He continued, "She goes, ‘What do you mean?' I'm like, 'They're all about you. Like every song I've ever wrote.' And I'm rhyming off the songs, like, 'Treat You Better,' all these songs. She's like, 'Oh my god.' This whole time, I thought she knew."

For more of these revelations, check out Shawn Mendes: In Wonder, out on Netflix now.

More like this
The 'Love, Lizzo' Harry Styles Scene Is Just 1 Moment That Made Fans Feel Seen
By Brad Witter
Yes, That's Lindsay Lohan's Sister Singing In The 'Falling For Christmas' Movie
By Radhika Menon
North West Has Mastered The Wednesday Addams & Lady Gaga TikTok Dance
By Jake Viswanath
How To Stream 'White Noise' On Netflix
By Grace Wehniainen
Get Even More From Bustle — Sign Up For The Newsletter