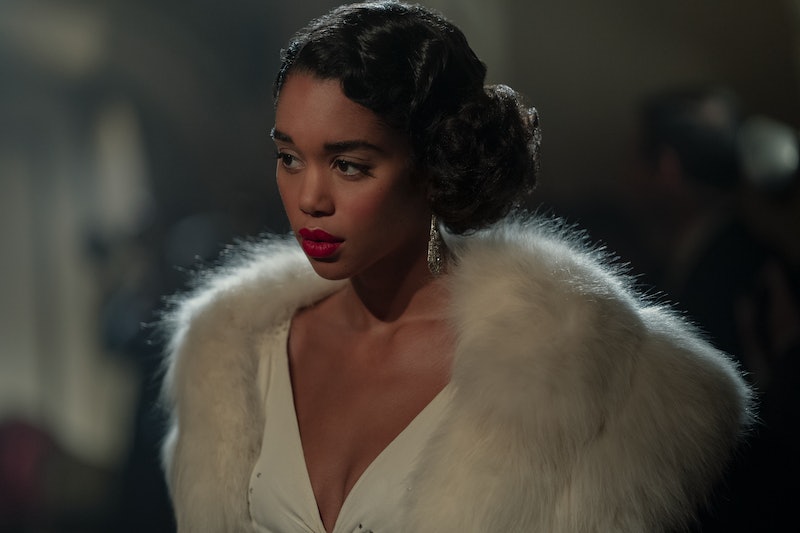 Saeed Adyani/Netflix
By Brad Witter
May 1, 2020

Though Laura Harrier's Hollywood character, Camille Washington, isn't based directly on a real person, she did look to other famous women in order to shape her performance. According to The Hollywood Reporter, Harrier worked closely with executive producer and director Janet Mock in order to familiarize herself with the time period the show is set in. She also read about and watched the works of real-life figures including Dorothy Dandridge and Lena Horne for inspiration.

A black actress trying to make it big in '40s era-Hollywood, Camille struggles to land roles that aren't regressive and stereotypical, despite being more talented than her white counterparts. Her director boyfriend Raymond (Darren Criss) helps to kickstart her career when he casts her in his movie Meg, making her the fictional first woman of color to star in a major motion picture.

This draws the attention of Hattie McDaniel (Queen Latifah), who in real life became the first black person to win an Oscar when she took home the Best Supporting Actress Academy Award in 1940 for her role as "Mammy" in Gone With the Wind. Dandridge, meanwhile, became the first black woman to be nominated for a Best Actress Oscar — making her a fitting a source of inspiration for Harrier's Camille, even though she didn't win. It wasn't until 2002, when Halle Berry won for Monster's Ball, that a woman of color finally took home a Best Actress Oscar. As of 2020, Berry remains the only black woman who has ever received the award.

This happens much earlier in Hollywood, with (spoiler alert!) Camille winning Best Actress for her role in Meg. And Harrier has imagined how things might have been different had this really happened.

"I think it would have changed the world in a huge way, not just for me as an actress of color but for representation in general," she told THR. "Because it matters when you see someone who looks like you onscreen and when you hear stories that are like your stories — it makes people feel less like outsiders, it makes them feel important, and that changes the way you walk through the world."