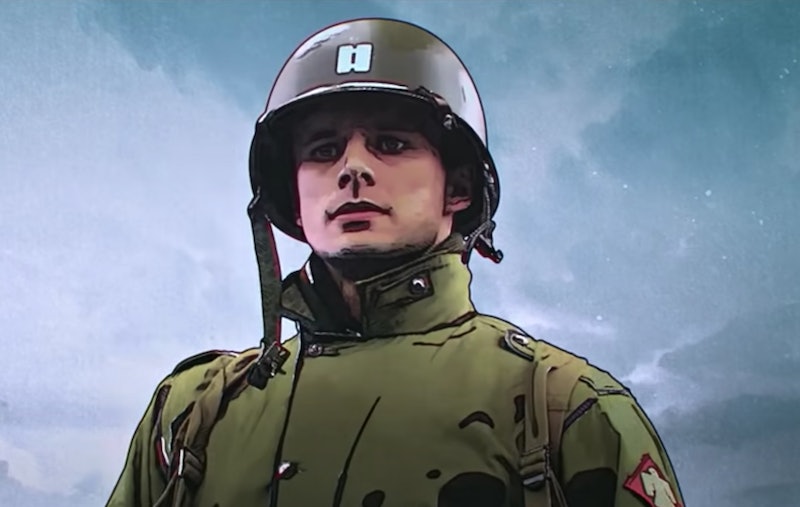 Bradley James, most famous for playing King Arthur on BBC's Merlin, is back to portray yet another larger-than-life leader in Netflix's The Liberator, an animated World War II miniseries. The show is centered on Captain Felix Sparks (James) and follows him as he makes his way back to his men after being gravely wounded in an encounter.

The series is adapted from the book The Liberator: One World War II Soldier’s 500-Day Odyssey by Alex Kershaw. As Kershaw explained on The Art of Manliness podcast, Sparks was a real person who led the 45th infantry division aka the Thunderbirds. "The 45th infantry division had more Native Americans among its ranks than any other," Kershaw said, noting that the division included over 1500 Native Americans from New Mexico, Colorado, Arizona, and Oklahoma. "You can't get much more quintessentially American than that." Though German propaganda often mocked Sparks' forces as "half breeds," they were a formidable division that fought 511 days in combat. Sparks himself commanded the respect of his troops by always leading from the front and projecting calm to comfort his men.

Per his Denver Post obituary, Felix Laurence Sparks was born on August 2, 1917 in San Antonio, Texas and grew up in the small copper mining town of Miami, Arizona. The Great Depression hit when he was in high school; after failing to find employment, Sparks traveled to San Francisco and enlisted in the U.S. Army in 1935. Sparks was a captain by the time WWII started, and just as The Liberator portrays, he was wounded in combat on October 6, 1943. He was evacuated and declared unfit for further combat, but Sparks refused to abandon his men and hitchhiked back to the 45th Division headquarters. In the Netflix trailer, Sparks told his wife, "When I left you to come over here, I was scared of losing you, scared of not coming back, scared of dying. But I began this war with a group of men, men who I owed a debt to.”

Sparks' honor continued to carry him through the rest of the war. While the higher ups reportedly disliked him for questioning their orders, he was widely respected among his men and even the enemy. In August 1944, the Thunderbirds encountered the German "Black Edelweiss" regiment. During the bloody battle, Sparks left his armored tank to pull his wounded comrades to safety while in full view of the German forces. As Johann Voss wrote in his memoir, Black Edelweiss, his fellow troops could have easily shot Sparks, but they held their fire out of respect for his courage.

The Thunderbirds' story culminated in the liberation of the Dachau concentration camp on April 29, 1945. "There are no words for Dachau, and even the pictures of its horrors are pale beside its realities," Sparks wrote in his personal account. "Veterans of six campaigns to whom death was commonplace, sickened and vomited at Dachau. Not the sight and smell of death did this, but the decaying evidence of human cruelty that was beyond the understanding of the normal mind."

After the war, Sparks continued to live a remarkable life. He earned a law degree at the University of Colorado and went on to serve as a justice on the Colorado Supreme Court. He also organized the Colorado National Guard and was the director of the Colorado Water Conservation Board. Sparks died in 2007 due to pneumonia complications, but his legacy lives on. In the Denver Post obituary, retired general Mason Whitney stated, “Whether in crisis or combat, he was looked to as a rock, a leader."