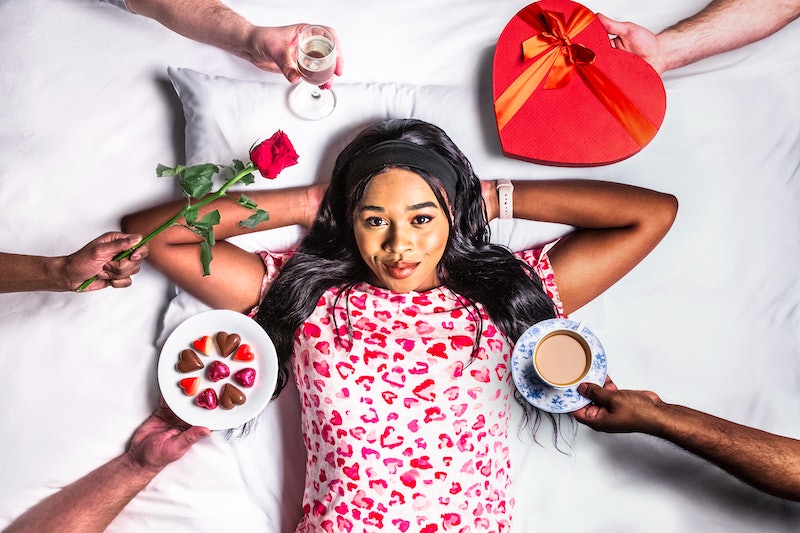 The TV dating show resurgence is showing absolutely no signs of slowing down, as the return of Channel 4's Five Guys a Week, proves. The series, now in its second series, centres around an unconventional approach to finding love, and follows a group of single women as they invite five men to move in with them at the same time. The reality show is presented as being, well, reality. But is Five Guys a Week scripted?

As it stands, there has been no official comment regarding whether or not the series is scripted.

However, during an interview with iNews, Five Guys a Week contestant Amy Louisa Jane recounted her experience of filming series one of the show, and delved into how the format actually works. Although not confirmation by any stretch, Amy's account appears to suggests the show's content does not emerge from the pages of a script — which makes Channel 4's dip into the reality-dating pond all the more enjoyable.

As per Radio Times reports, Five Guys a Week sees a different woman invite five men into her own home each week. During their brief stay, the men will get to know and strive to impress their temporary roommate. However, the women are tasked with eliminating a different man at the end of each day, until eventually, only her perfect match remains. The series prides itself as being the "antidote to traditional dating shows," and aims to ask the question: "How do you know if someone’s right for you until you’ve lived with them?"

Throughout the five-part series, viewers are introduced to a different single woman each episode — all of whom have varying ideas of what they'd like to find in a potential partner.

"This simple format goes well beyond the realm of a traditional dating show," said Gilly Greenslade, the Factual Entertainment Commissioning Editor for Channel 4. Speaking of the new series, Greenslade further explained how Five Guys a Week explores "what people actually want from their partners," whilst also "offering a revealing — and sometimes surprising — insight into the male psyche."

Following the successful first season, the new series returns Sept. 18 with the same well-oiled format. As of yet, there’s still not much info on the new cast members other than their partner preferences including Hope, whose penchant for Celtic men means she’ll be inviting five ginger-haired guys into her home for a week.

Per Cosmopolitan, none on the show’s original couples have gotten together since it ended so the jury’s out whether the show format works for singletons. Here’s hoping the new series sees better results.

More like this
Joey Essex Is Rumoured To Be Dating A 'Love Island' Favourite
By Sam Ramsden
ITV’s New Take On 'Love Island' Is Only For MILFs & DILFs
By Sam Ramsden
Twitter Has Renamed Ekin-Su After *That* 'Dancing On Ice' Performance
By Sophie McEvoy
'Love Island' Has Added Yet Another Bombshell To The Villa
By Bustle UK
Get The Very Best Of Bustle/UK
Sign up for Bustle UK's twice-weekly newsletter, featuring the latest must-watch TV, moving personal stories, and expert advice on the hottest viral buys.