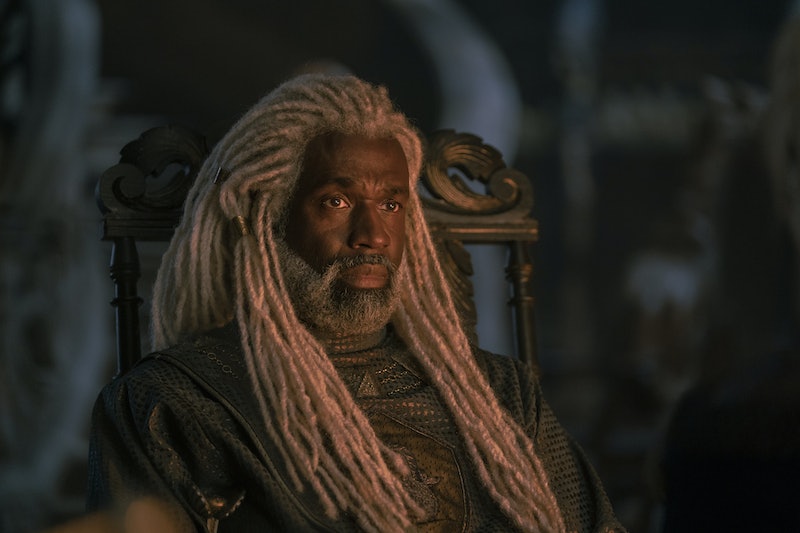 Spoilers for House of the Dragon Episode 8 ahead. Despite its impressive roster of characters, Episode 8 of House of the Dragon proved that sometimes the most important player isn’t always on screen. House Velaryon has been through a lot in the last several episodes, between Laena’s suicide by dragon fire, Laenor faking his death to escape from Driftmark, and the family losing Vhagar, one of the realm’s oldest and fiercest dragons. If anything, Season 1 has proved that none of the Verlaryons, not even the Sea Snake himself, are immune to disaster. And now, Corlys’ disappearance brings even more questions about the future of House Velaryon.

Is Corlys Dead On House of the Dragon?

Although he was absent from the entirety of Episode 8, Corlys Velaryon (Steve Toussaint) may have been its most important character. The episode opens with his wife Rhaenys (Eve Best) recounting the passage of time between Episodes 7 and 8. It’s been six years since we last checked in with the characters, and in such time another war has been waged. The oft-mentioned Triarchy has taken up arms against the monarchy, so Corlys guided his navy into battle. In the scene, Rhaenys speaks to Corlys’ brother Vaemond Velaryon (Wil Johnson), who reveals that Corlys and his fleet were ambushed in battle. The Sea Snake had his throat slashed before falling overboard into the sea. Thankfully, his wounds weren’t lethal, but a contentious fever has Corlys on death’s doorstep.

So, he didn’t die, but he is in pretty rough shape. In fact, his condition is so dire that a succession plan was made to select the next Lord of the Tides. As we saw in Episode 7, Corlys offered the mantle to Lucerys Velaryon (Elliot Grihault), the second son of Rhaenyra (Emma D’Arcy) and Laenor (John Macmillan). However, the teenaged royal seemed apprehensive about accepting the offer. Both Vaemond and Rhaenys also showed an interest in the title, but given that Corlys always wanted the title to pass through Laenor’s bloodline, it seems unlikely that either his wife or brother would replace him.

In the second half of the episode, Vaemond makes his plea to supplant his brother when the time comes. However, he’s interrupted by a surprise appearance from King Viserys I (Paddy Considine), who puts a stop to the proceedings. Viserys informs everyone that the title would descend directly to Lucerys, much to the chagrin of Vaemond. Incensed, Vaemond begins antagonizing Rhaenyra, calling her sons bastards and calling Rhaenyra a whore. His comments earn him a blade through the skull, courtesy of Daemon (Matt Smith). With Vaemond out of the way, Lucerys is ultimately named successor, as House Velaryon loses another member. Rhaenys then agrees to betroth Lucerys to Rhaena (Phoebe Campbell), and Jacaerys (Harry Collett) to Baela (Bethany Antonia), to strengthen the alliance between the Velaryons and Targaryens.

What Happens To Corlys In Blood & Fire?

In the source material, Corlys is a cunning and wealthy sea lord who owns the largest navy in Westeros. As an aid and confidant of King Viserys I, Corlys holds a spot in the king’s small council, but still harbors resentment for Viserys, considering Viserys, and not Corlys’ wife Rhaenys, was chosen as heir to the Iron Throne. In keeping with the books, he and Rhaenys lose both their children, and shortly thereafter Corlys falls ill to a nagging fever.

The story plays the same as it does in Episode 8: Vaemond attempts to lay claim to Corlys’ title as Lord of the Tides, the case is also made for Lucerys, Vaemond publicly berates the princess and her children and is murdered by Deamon. Though Corlys’ illness opened the door for all these dramatics to take place, he would recover from his ailments in three years.

During the Targaryen civil war, Corlys aligned with his former daughter-in-law Rhaenyra, lending her the largest naval force in Westeros. Following the death of her son Lucerys, Rhaenyra was so grief stricken that Rhaenys and Corlys briefly commanded her war council. As the war progressed, Rhaenys would also die in battle at the hands of Prince Aegon II and Prince Aemond. Corlys blamed Rhaenyra for his wife’s death, as Rhaenyra forbade her remaining sons from accompanying Rhaenys into battle. Thankfully, Rhaenyra’s son Jacaerys named Corlys Hand of the Queen, which mended the relationship between him and Rhaenyra.

After assisting in the fall of King’s Landing, Corlys was approached by a woman named Marilda. The stranger claimed to have had two children with Laenor: Addam and Alyn. Though many found it hard to believe that the children were actually Laenor’s, Rhaenyra legitimized them after taking the throne. Some rumors posited that the children were actually Corlys,’ and that he’d kept them hidden until his wife had passed.

Corlys managed to survive the Targaryen civil war, but not without difficulty. During the war, many Targaryen bastards, known as “dragonseeds,” left Rhaenyra’s campaign in support of Alicent. After taking the city, Corlys urged Rhaenyra to be merciful to other dragonseeds; however, as a precautionary measure, she sought to eliminate all dragonseeds, starting with Alyn and Addam. Corlys was able to warn Addam, thus giving him enough time to flee the city, but Corlys was beaten for his treason, and thrown in the dungeon.

When news of Corlys’ imprisonment was made public, nearly half of Rhaenyra’s army and supporters abandoned her. After riots and unrest, Rhaenyra was forced to flee the city, which allowed Corlys to become a free man. Queen Alicent would then grant Corlys a pardon after he swore fealty to Aegon II. Corlys was granted a seat on Aegon II’s council, where he pleaded with the king to spare the lives of Rhaenyra’s remaining children, specifically Aegon III. Corlys then started an alliance with Lord Larys Strong, and the two conspired to poison the king, thus ending the war entirely.

Following Aegon II’s death, the court was ruled by Lord Cregan Stark. The Stark lord wanted to prosecute all those who served under Aegon II, but Aegon III, as well as Corlys’ grandchildren Baela and Rhaena Targaryen, argued for his safe release. Corlys was finally granted freedom once again, and would serve as an advisor and regent for King Aegon III before dying of old age.

More like this
'GoT' Star Emilia Clarke Says She "Just Can't" Watch 'House Of The Dragon'
By Brad Witter
Here’s What Happens To Bill & Frank In 'The Last Of Us' Video Game
By Brad Witter
The 'Gossip Girl' Reboot Creator Is “Looking For A New Home” To Air A Potential Season 3
By Brad Witter
The 8 Best Aidan Shaw Moments On 'Sex And The City'
By Grace Wehniainen
Get Even More From Bustle — Sign Up For The Newsletter
From hair trends to relationship advice, our daily newsletter has everything you need to sound like a person who’s on TikTok, even if you aren’t.