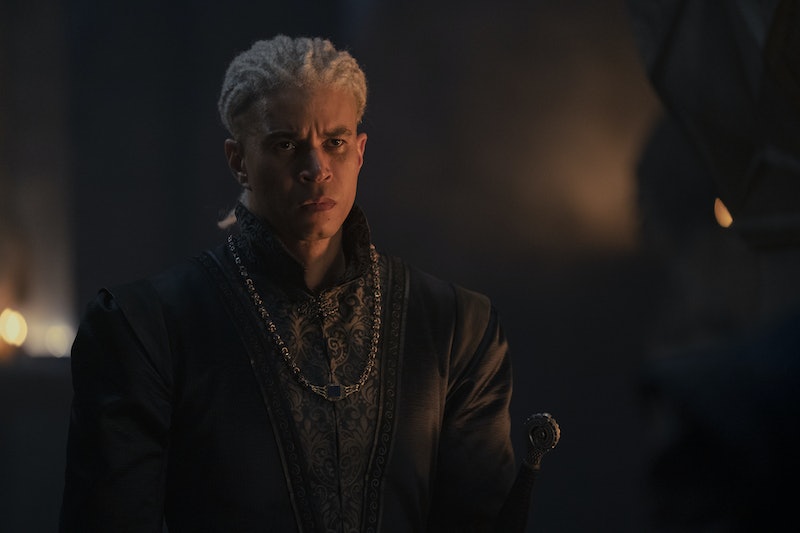 House of the Dragon Episode 7 has shifted the landscape of Westeros, with the Game of Thrones spin-off bringing forth its biggest twist yet. As Sunday’s latest chapter ended, it wasn’t Rhaenyra (Emma D’Arcy) and Daemon (Matt Smith) getting married that shocked viewers, but how they went about removing the princess’ first husband, Laenor (John Macmillan), from the picture. While Laenor is now gone, he’s certainly not dead as the final scene revealed, and it’s a major departure from what happens to his character in George R. R. Martin’s novel, Fire & Blood.

Following the death of his sister in Episode 6, Laenor and the rest of the royals head to Driftmark to mourn Laena (Nanna Blondell). Laenor is largely absent, inconsolable at the loss of his sister. When Laenor later reconvenes with Rhaenyra, he apologizes for not being around, and they lament about their long marriage. He remains regretful before promising to be a better father to their children and raising them to be true princes.

That sounds nice, were it not for Rhaenyra and Daemon’s newly revived romantic relationship. Earlier in the episode, the uncle and niece had a long conversation about their lives and how they should’ve been there for one another. This results in the Targaryen relatives finally sleeping with each other. After Rhaenyra’s talk with Laenor, she sees Daemon again and proposes marriage to him, explaining how they were always “meant to burn together.” If they were to marry, Daemon would become the Prince Consort, and with their united power, no one could challenge their claim to the Iron Throne. Daemon points out they wouldn’t be able to marry unless Laenor dies, so he and Rhaenyra plan Laenor’s death.

How Does Laenor Survive In House Of The Dragon Episode 7?

Daemon first seeks out Qarl Correy (Arty Froushan), who appeared in Episode 6 as the squire Laenor was sparring with. It’s heavily implied that he and Laenor are lovers, and Rhaenyra permitted Qarl to join them in their move to Dragonstone. Qarl is mostly on the periphery in Episode 7 until he’s finally approached by Daemon in the episode’s final minutes. The prince bribes Qarl with heaps of gold to kill Laenor — kind of. He actually pays him for a “quick death with witnesses,” which is a bit of a misdirect.

Daemon is then seen killing a nameless squire at Driftmark, shortly thereafter Qarl confronts Laenor in the main hall, and the two draw swords. The camera cuts away after some combat, and when we return to the action, there’s a body burning in the fireplace. We’re led to believe this is Laenor’s body, but it’s not. It’s the random servant Daemon killed. As the episode ends, a now-bald Laenor and Qarl escape together on a rowboat, having successfully orchestrated their part of the ruse.

It’s a significant change to what happens in the source material, as the show has left the door open for Laenor’s potential return. For one, it proves that while Rhaenyra and Daemon are shrewd schemers, the princess was fond enough of Laenor to spare his life. But it also wisely avoids the “bury your gays” trope by allowing the show’s main gay character to live and not die a tragic death.

What Happens To Laenor In Fire & Blood?

In Martin’s book, Laenor’s story plays out much differently. He still gets married to Rhaenyra, and the duo agree to sleep with whomever they like behind the guise of their marriage. After their wedding, a distraught Laenor returns to Driftmark and finds solace in the arms of Ser Qarl Correy. Laenor would make frequent trips to the capital but mostly remained away from King’s Landing. When Rhaenyra announced her third pregnancy, it raised eyebrows considering Laenor’s constant absence. Their children also bore a striking resemblance to Ser Harwin Strong, Rhaenyra’s rumored lover. As a result, Alicent antagonized both Rhaenyra and Laenor based on the look of their children, which forced the couple and their heirs to leave the capital for Dragonstone.

Things really start to deviate from the books when it comes to Laenor’s death. Laenor, the future King Consort, met his end at the blade of Ser Qarl Correy, who’s said to have murdered Laenor due to jealousy. Qarl believed Laenor was beginning to have eyes for other men. However, there were rumors that Daemon had paid Qarl to kill Laenor to free Rhaenyra from her sham marriage.

Corlys Velaryon then put a bounty on Ser Qarl’s head, before collecting his son’s body and giving him a funeral at Driftmark. Though he and Rhaenyra’s alleged heirs all died during the Targaryen civil war, a woman by the name of Marilda approached the Velaryons claiming to have had two sons by Laenor. Many were skeptical of her claims, but the children bore a resemblance to Laenor. Corlys gladly accepted his alleged grandchildren, even though it was rumored that Corlys was the true father of the boys. Regardless, Rhaenyra legitimized the children were legitimized when she became queen.

More like this
'The White Lotus' Costume Designer Explains That Accidental 'Princess Diaries' Moment
By Grace Wehniainen
Everything To Know About 'The White Lotus' Season 3
By Grace Wehniainen
The 'Love, Lizzo' Harry Styles Scene Is Just 1 Moment That Made Fans Feel Seen
By Brad Witter
Matt Smith Proves He's Daddy Daemon In This Viral 'House Of The Dragon' Video
By Marina Watts
Get Even More From Bustle — Sign Up For The Newsletter