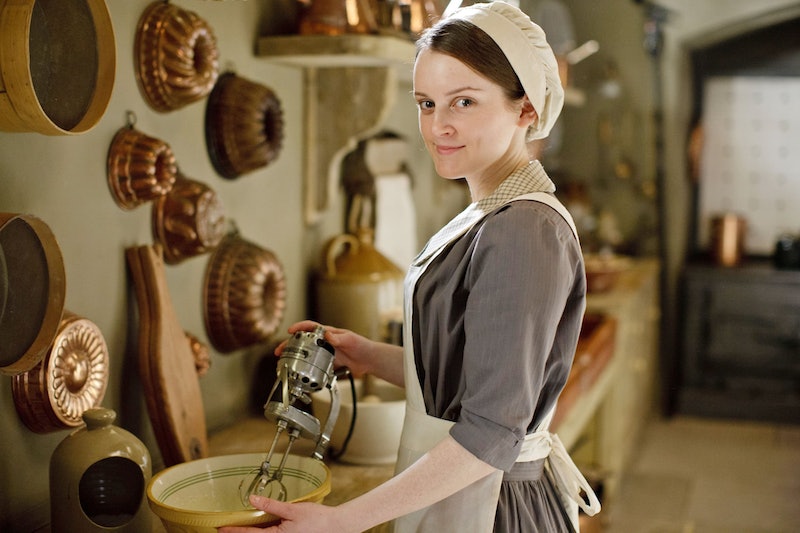 With promotion for the next Downton Abbey movie – Downton Abbey: A New Era – well underway, fans’ anticipation for the film’s release in March 2022 is reaching fever pitch. While viewers are eager to catch any hints about what our favourite fictional aristocratic family has been up to, it appears one downstairs member has some major news, too. Eagle-eyed fans have spotted clues that suggest Daisy may have married her latest love interest, Andy Parker.

Daisy, originally the shy kitchen maid, has risen through the ranks (and found her way into viewer’s hearts!) over the course of the Downton series. And despite being known for her doomed romances in the show (from becoming a war widow to her painful bout of unrequited love), it seems she may have finally found her happy ending.

Daisy originally met Andy in the final season of Downton Abbey who eventually joined the staff as a second footman. He quickly bonded with both her and her father-in-law, Mr Mason. Viewers who had followed the unfortunate happenings in Daisy’s love life were thrilled to see her finally fall in love. But where do Daisy and Andy stand now?

Well, the first clue came thanks to a promotional photo of Daisy and Mrs Patmore cooking in the kitchen. While the photo may seem innocent enough at first, look closely and you’ll see that Daisy is sporting a wedding band on the traditional finger, in clear view just above the pot. As one fan pointed out, Daisy used to wear a wedding band for her former husband, William Mason, but it appears the band has changed colour – from silver to gold – implying this could be for a new marriage.

The second clue – and it’s a big one – is Daisy’s name in the promotional material. In the show, she was always known as Daisy Mason (having taken the name of her husband who died at war). However, in one poster providing the full list of characters, Daisy is named Daisy Parker. This is in reference to her presumed husband, Andy Parker.

So it looks like Tom Branson’s marriage is not the only one we have to celebrate in the upcoming film.

More like this
Your Guide To Watching 'Everything Everywhere All At Once' In The UK
By El Hunt and Sophie McEvoy
Rita Ora Finally Opened Up About Marrying Taika Waititi & Their "Perfect" Wedding
By Sophie McEvoy and Catharina Cheung
Everything To Know About The 'Daisy Jones & The Six' TV Series
By Maxine Harrison and Brad Witter
Channing Tatum “Nearly Killed” Salma Hayek During 'Magic Mike' Lap Dance
By Sam Ramsden
Get The Very Best Of Bustle/UK
Sign up for Bustle UK's twice-weekly newsletter, featuring the latest must-watch TV, moving personal stories, and expert advice on the hottest viral buys.