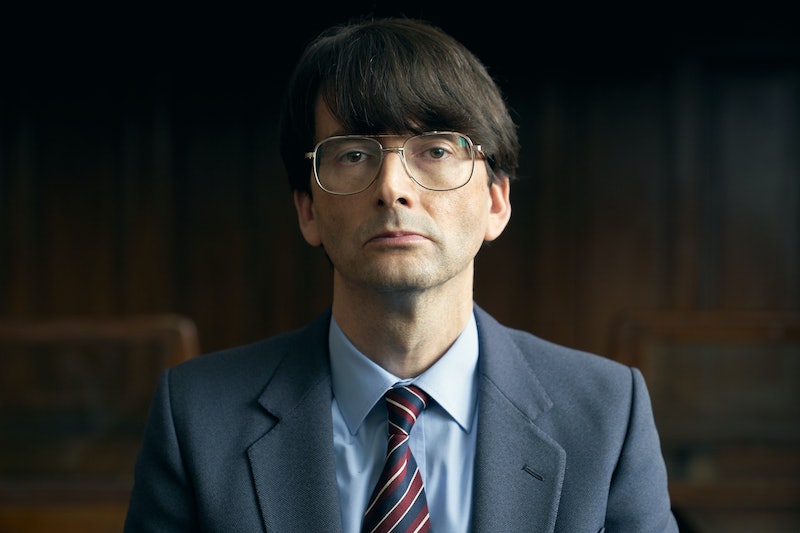 David Tennant will transform into one of Britain's most notorious serial killers in ITV's latest true-crime drama Des, which follows the story of a man who targeted and murdered vulnerable individuals across London throughout the late 1970s and early '80s. But is Des based on a true story?

As iNews reports, the drama is based on the true story of serial killer Dennis Nilsen, who was accused of killing at least 12 people between 1978 and 1983. Nilsen would reportedly befriend victims on the streets of Soho before luring them back to his north London flat — a tactic which earned him the nickname "kindly killer." He would later murder and oftentimes dismember his victims, the majority of whom were homeless young gay men, the BBC reports. At the age of 37, Nilsen was arrested after human remains were discovered in a blocked drain outside of his home.

The remains were located after neighbors complained about an unpleasant smell emerging from the drains, which, after an inspection by a plumber, were found to be filled with human flesh. It was later revealed the bodies of three men were discovered at his Muswell Hill flat, and the bones from at least eight other bodies were retrieved from his previous address in northwest London.

As the Guardian reports, Nilsen was convicted of six counts of murder and two counts of attempted murder at the Old Bailey in 1983 — a sentence that was later upgraded to a whole-life tariff. In May 2018, he died at the age of 72 at HMP Full Sutton maximum security prison in Yorkshire. As reported by Bustle, Nilsen had suffered a blood clot during surgery which led to internal bleeding. His official cause of death was pulmonary embolism (a blockage in the lungs) and retroperitoneal hemorrhage (bleeding on the brain).

Nilsen's crimes and eventual conviction will be depicted in ITV's Des, the cast of which is led by former Doctor Who star David Tennant, who will appear in the drama alongside White Lines' Daniel Mays; Being Human's Jason Watkins; actor, comedian, and rapper Ben Bailey Smith; and many more.

Speaking to the Radio Times, Tennant discussed how reviewing old footage of Nilsen helped him prepare for his latest role. “There is some footage of Nilsen in an interview he did with Granada Television when he was in prison, and he was an avid home movie-maker, some of which survive, so we were able to see those,” the actor explained. “It was a useful starting point to see how he moved and how he sounded, as there are occasional bits of audio of him around, too."