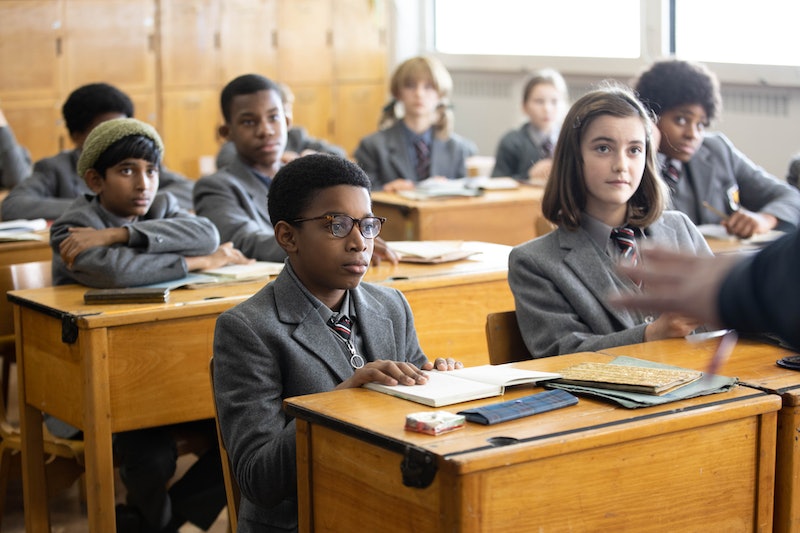 The story of an untold British scandal is at the centre of the fifth and final film in Steve McQueen's BBC anthology, Small Axe. Set in the 1970s, the film explores the unofficial segregation policy at play within the British education system throughout '70s and '80s, which saw a disproportionate number of Black children transferred to schools for the so-called "educationally subnormal" (ESN). Elements of the anthology's final chapter are based on true events, but is the school in Small Axe: Education based on a real place?

In the film, London schoolboy Kingsley, who harbours a deep fascination for all things astronaut-related, is pushed out of mainstream education and sent to a school intended for those with "special needs." Distracted by a demanding work schedule, the 12-year-old's transfer goes unnoticed at first by Kingsley's parents. That is until a group of West Indian women take matters into their own hands to ensure Black children receive the education they deserve.

In Education, the character of Kingsley is sent to The Durants School in London. I have reached out to the BBC to determine whether this institution is based on a real place, and will update with any relevant information as soon as possible.

However, whether Durants was based on one particular institution or not, schools like it were very much a part of the British education system throughout the 1970s and '80s, a time when former Prime Minister Margaret Thatcher held the position of Secretary of State for Education and Science, prior to her Downing Street premiership.

In a BBC press release sent to Bustle UK, show-makers also confirmed the situation in which Kingsley finds himself was a frequent occurrence for Black children during this era. Executive Producer Tracey Scoffield says in the statement that "Education is based around a very particular set of circumstances which happened in Haringey, London."

Scoffield goes on to speak about 1969 'The Doulton Report,' written by Alfred Doulton, Headmaster of Highgate School, which suggested children of West Indian heritage were "educationally subnormal."

"There was widespread opposition to the banding proposals because of the following passage in this leaked report: 'On a rough calculation about half the immigrants will be West Indians at 7 of the 11 schools, the significance of this being the general recognition that their IQs work out below their English contemporaries. Thus, academic standards will be lower in schools where they form a large group.'

Scoffield continues, “The reasons they failed those IQ tests were variously to do with the fact that they were not born and brought up in England and didn’t know the culture, along with the fact that English might be their second language. Factors like these were not taken into account and a large number of West Indian children were simply bussed out to these educationally subnormal schools.”

Academy Award-winning director Steve McQueen reflected on his own experiences in the British Education system, revealing he wasn't familiar with the formation of educationally subnormal schools until research for this chapter of the Small Axe anthology began.

“I had an unfortunate time growing up as a Black child in the British Education system. Sadly, I was not alone," McQueen recalled. "Before our research began, I had never heard of the ‘Educationally Subnormal Schools’ that were being formed in the 1970s in this country. As we dug deeper I realised there was a narrative within this neglect. I combined my own experience with the source material to tell the story of a young Kingsley.”

Newcomer Kenyah Sandy stars in Education as the imaginative schoolboy Kinglsey, and is joined in the film's cast by We Hunt Together's Sharlene Whyte, Once Upon A Time's Daniel Francis, The Long Song star Tamara Lawrance, Wonder Woman's Josette Simon, and the BAFTA-winning Naomi Ackie, known previously for her roles in The End of the F***ing World and Star Wars.