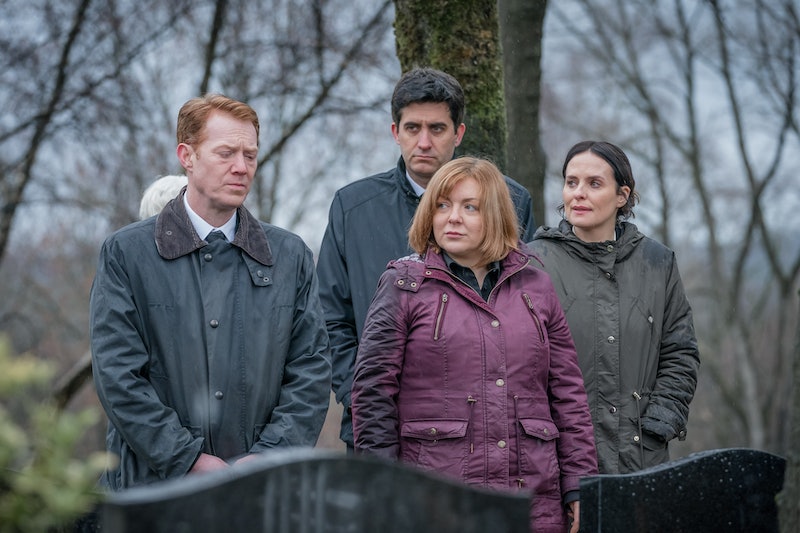 Stephen Merchant and Sheridan Smith star in the brand new BBC crime drama Four Lives, a mini-series described as “utterly harrowing.” It tells the story of four men who were tragically murdered in London and the deeply flawed police investigation that followed. Four Lives is told from the perspective of the victims’ family and friends, but is the new drama based on a real story?

Sadly, yes, Four Lives is based on a very real tragedy that took place not too long ago. You may be familiar with the media-dubbed “Grindr Killer” and the murders that took place over 2014 and 2015. Four young men — Anthony Walgate, Gabriel Kovari, Daniel Whitworth, and Jack Taylor — were raped and drugged by now-convicted murderer Stephen Port after he lured them to his flat in Barking, East London.

Port, 46, was convicted in 2016 and is currently serving a life sentence for his crimes, meaning he will die behind bars. As Pink News reported, the Essex-born murderer had multiple sexual assault victims and used the dating app Grindr to seek out young gay men, before bringing them back to his apartment for sex.

Seven years after the tragedies, a ten-week inquest into the four deaths only concluded this December. Per BBC, the jury ruled that “failings by the Met Police contributed to the deaths of Port's final three victims”. It’s understood that the Metropolitan Police initially treated the deaths as non-suspicious, despite their glaring similarities (bodies were found in the same location in Barking), until the fourth man died in the same area near Port’s residence.

Ahead of the inquest, the families’ lawyer Neil Hudgens said, per Pink News, that the families have always wondered “whether there would have been a different outcome if the police had investigated Port properly and taken their concerns seriously, and if their boys hadn’t been gay.”

“For them, the inquests mark a key step in their quest for accountability,” the lawyer added.

Despite police failings, Walgate, Kovari, Whitworth, and Taylor’s families and friends worked to find out what happened to them. This will be portrayed in BBC’s Four Lives.

More like this
This First Look At 'The Gold' Shows Jack Lowden In A Whole New Light
By El Hunt and Sam Ramsden
ITV's 'Maternal' Was Inspired By A Very Simple – & Unanswerable – Question
By Maxine Harrison
A New Netflix Doc Will Explore The Unsolved Murder Of Jill Dando
By Sam Ramsden
Twitter Is Burning As Phoebe Dynevor Reveals Daphne’s 'Bridgerton' Exit
By Sophie McEvoy
Get The Very Best Of Bustle/UK
Sign up for Bustle UK's twice-weekly newsletter, featuring the latest must-watch TV, moving personal stories, and expert advice on the hottest viral buys.