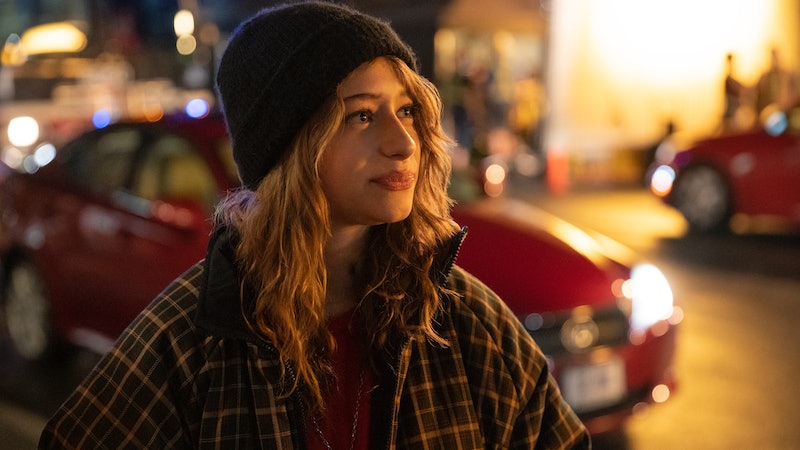 Light spoilers ahead for Grand Army Season 1. Netflix's new teen drama, Grand Army, is based on Katie Cappiello's short 2013 play SLUT, which follows outspoken activist Joey (played by Odessa A'zion in the Netflix series) after she's raped by close friends. Both SLUT and Grand Army are inspired by the true stories of the young women in the theater company Cappiello ran with Meg McInerney. But Grand Army widens the scope of the story, introducing four other Brooklyn teens who deal with issues like racism, homophobia, and poverty.

As Cappiello and McInerney explained in SLUT's preface, they founded the Arts Effect All-Girl Theater Company in 2007 to offer girls a supportive space to train as actors, share their stories, and learn how to craft thought-provoking feminist theater. The idea for SLUT grew out of their weekly creative sessions, where girls in the company revealed their experiences with slut-shaming. "Sometimes through tears, members of the group explained how they’d been slut-shamed for anything and everything: flirting with anyone; 'strutting' down the hallway; having large breasts; coming out as lesbian, bisexual, or transgender; being poor; being rich; being Black; being Latina; being confident; being curious; kissing someone; liking sex; liking their bodies," they wrote. A third of the girls revealed they'd been slut-shamed even after being sexually assaulted.

Cappiello's writing was also propelled by real-life tragedies, like the suicides of Audrie Pott and Rehtaeh Parsons; the Steubenville, Ohio rape case; and the Torrington, Connecticut rape case. "The devastating impact of slut culture was on full display and it felt more necessary than ever to give voice to those living this reality every day, those we often don’t hear from: the girls," she and McInerney wrote in SLUT's preface.

After extensive conversations and workshopping of various conflicts and dialogue choices, Cappiello finished SLUT's script in 2013. Everything in the story is a composite of real events: after Joey is raped by her three male friends in a taxi cab, she deals with personal shame, judgmental classmates, and a cold and clinical police interrogation process. "Our intention in creating and producing SLUT is to tell the truth," Cappiello and McInerney wrote. "Brought to life by real girls, this play exposes the damaging language, shame, and deep-rooted sexism that fuel rape culture. While we don’t believe SLUT preaches answers, we know it poses necessary questions."

On its own, SLUT was 70 minutes, and the rest of the playbook explained how to teach kids about topics like cyberbullying, assault within the queer community, and the way Latina and Black women are shamed differently than white women. Grand Army expands on that, adding in Joey's story before the assault. In the show, she's still an outspoken feminist who speaks out against school dress codes and its slut-shaming culture. But the rest of the series also explores a myriad of issues facing teens today — including how damaging Joey's white feminism can be for her classmates of color. Dom (Odley Jean) juggles college and romantic aspirations while financially supporting her family. Musicians Owen (Jaden Jordan) and Jayson (Maliq Johnson) get a sobering reminder of the school-to-prison pipeline after a small prank goes awry and Joey reports them. And both Leila (Amalia Yoo) and Sid (Amir Bageria) grapple with their Asian identities and their need to fit in — sometimes to devastating effect.

These new stories were the result of "years of listening to my students talk" and "going to bar and bat mitzvahs," Cappiello explained to Entertainment Weekly in September. "It's years of having kids call you because they don't know how they're going to afford school." Ultimately, Grand Army takes "all of those years and all those relationships, and fuses them into these five characters."

While it does often feel like Grand Army bites off more than it can chew, A'zion, who's 21, said the show's exploration of these intersecting topics rang true to her. As she told Entertainment Weekly, “I don't know a single high school that isn't dealing with a million of these things at once.”