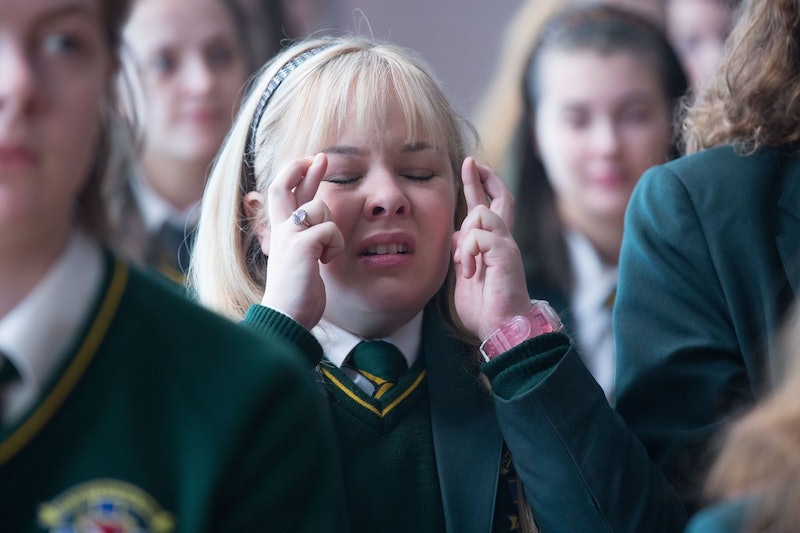 Derry Girls fans have been waiting in anticipation for series three of the hit Northern Irish comedy after it was delayed due to the pandemic. Despite setbacks, the cast has been teasing the "brilliant" new storylines, including a potential Hollywood cameo. So, is it true? Is Jamie Dornan going to be on Derry Girls?

Apparently, Dornan, who was born in Belfast, Northern Ireland, is in talks about appearing on Derry Girls – and some of the cast are already willing to welcome him "with open arms." Nicola Coughlan, who plays Clare Devlin in the show, spilled all about the potential new cast member during an interview in January .

"He’s definitely chatted to the writer, Lisa McGee, about joining Derry Girls," she said, via the Independent. "That would be the dream, and I would welcome him fully with open arms."

Dornan later confirmed he was indeed in touch with McGee in an interview the follows month. When asked by Vulture if he planned to appear, he said: "I know Lisa McGee, who created it, we emailed today about something actually." He went on to add:

"We’d talked about trying to get me to do something and it just kind of never worked out with locations and when they shoot, and I’m always away. I like the idea of popping up in that show, and I think it’s genius, and it makes me so proud. When I first heard about a show called Derry Girls, I thought, 'How is anyone outside of Ireland going to understand the colloquialism of it?' But it goes to show it’s transcended everything. You never know, but it takes everything aligning with schedules. I’m definitely a big fan."

Dornan is best known for roles in The Fall, A Private Ward, and of course, the Fifty Shades franchise, and it'd be interesting to see how he would fit into the popular Channel 4 series.

"Although my character is a lesbian and I think he is a little old for the girls, he could play a cool uncle or something," said Coughlan. "I would not object to Jamie Dornan [joining], and I don’t think anyone in their right mind would object to him."

Coughlan revealed Dornan isn't the only actor who like a chance to star in Derry Girls. "I know Lisa gets emails every day from actors because a lot of people would love to fit into the next series if they could," she said.

While it's not yet confirmed when the new series of Derry Girls will finally be released, Coughlan, 34, has said the new storylines are "brilliant" and the cast and crew are waiting for the green light before they can film in Derry.

More like this
Yes, 'The Price Of Glee' Is Available To Watch In The UK
By Catharina Cheung
This Dark 'Happy Valley' Theory Is Staring You Right In The Face
By Sophie McEvoy
Everything To Know About The 'Daisy Jones & The Six' TV Series
By Maxine Harrison and Brad Witter
'The Last Of Us' Has Officially Been Renewed For Season 2
By Darshita Goyal
Get The Very Best Of Bustle/UK
Sign up for Bustle UK's twice-weekly newsletter, featuring the latest must-watch TV, moving personal stories, and expert advice on the hottest viral buys.

This article was originally published on Jan. 18, 2021