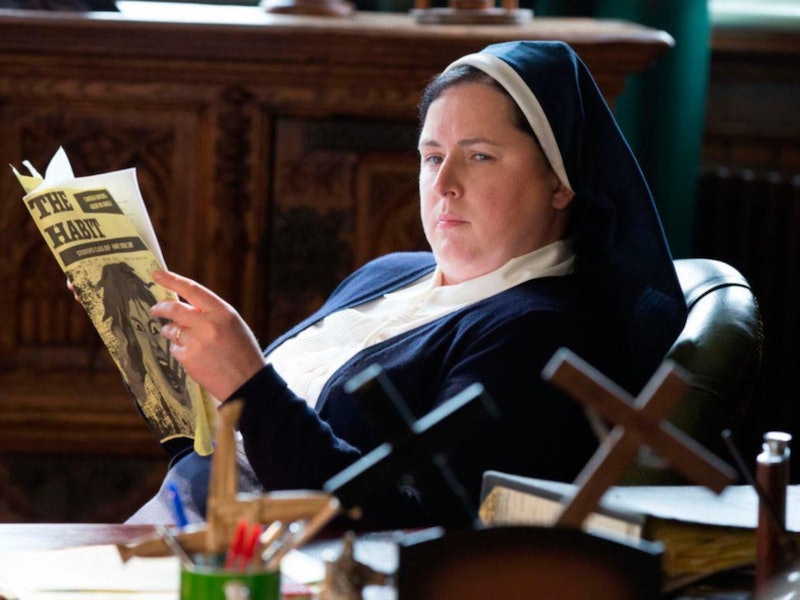 Derry Girls might well have been the first mainstream TV show to have the words "hoak" and "lurred" in its script. The hit Channel 4 comedy has finally given Irish people the opportunity to see their dialect reflected — without any anglicisms – by a major UK broadcaster. That's not its only appeal, of course. It just so happens to be one of the funniest shows I've seen in a good while, and it's steadily gaining a popularity that's comparable to the likes of The Inbetweeners. Now the show is hitting its stride, will Derry Girls return for series three?

Channel 4 confirmed the return of the series back in 2019, but like many other shows its development has been severely delayed due to the coronavirus pandemic. According to Radio Times, series three was due to begin filming in June last year, but was ultimately postponed.

Saorise-Monica Jackson, who plays Erin, told Metro in October 2020 that season three won’t start filming until the whole cast and crew is in Ireland together. “It’s really important to us that we keep the authenticity of the show and that we don’t deliver any show that’s in any way a limited version.”

C4’s director of programmes Ian Katz discussed the show’s production woes at the Edinburgh TV Festival in August 2020, suggesting that fans will have to wait quite some time before filming can commence.

“In comedy, I suppose, our biggest frustration has been that Derry Girls has been quite substantially delayed because, [out] of pretty much everything we make, it’s the hardest thing to make with social distancing,” he said. “It’s the most close-up, intimate production.”

Siobhan McSweeny, who plays Sister Michael, has also given some insight into Derry Girls’ production woes, describing it as a “scheduling nightmare” because of the pandemic. “[Show creator] Lisa [McGee] doesn’t want to compromise on quality, obviously, but I think we’re all very impatient to get it done for very obvious reasons.”

While it’ll be a while before fans get to watch series three, actor Nicola Coughlan, who plays Clare, revealed in January 2021 that the scripts are written. She described them as “brilliant” in an interview with Irish lifestyle site, Her. “We can’t do anything involving a crowd right now, so logistically, it’s really tough. But I spoke to Lisa McGee recently and she talked me through the storylines,” Coughlan explained. “They’re so brilliant, which doesn’t surprise me — she’s just incredible — but it made me want to do it right now.”

Once production can get rolling again, there’s even the possibility of a Derry Girls film in the future. “For a while I was kind of like, I dunno will it work,” show creator Lisa McGee said last year. “But now an idea is starting to vaguely form in my head. So after series three, I’ll think about that a bit more. I’d like to do it, and I think the girls would like to do it. So I think that would sort of be the long term plan.”

More like this
Everything To Know About The 'Daisy Jones & The Six' TV Series
By Maxine Harrison and Brad Witter
'The Last Of Us' Has Officially Been Renewed For Season 2
By Darshita Goyal
Armani Jackson Is Following In His Famous Actor Sister’s Footsteps
By Catharina Cheung
The Banned 'Friends' Ad Shows Monica As You’ve Never Seen Her Before
By Sam Ramsden
Get The Very Best Of Bustle/UK
Sign up for Bustle UK's twice-weekly newsletter, featuring the latest must-watch TV, moving personal stories, and expert advice on the hottest viral buys.