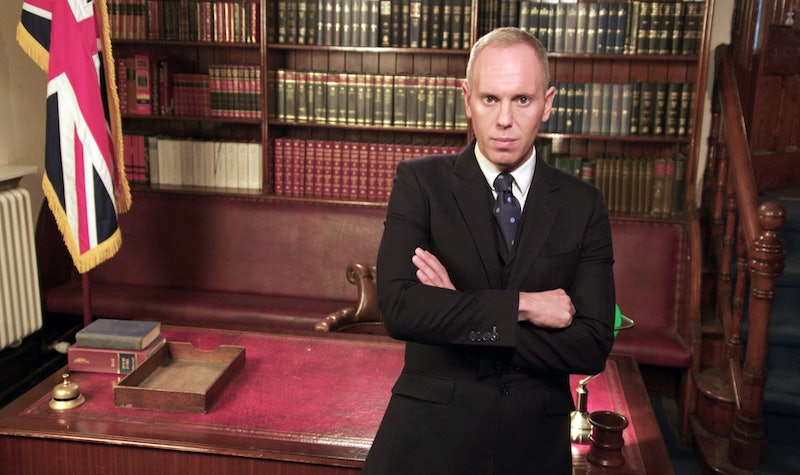 If there were awards for the TV show that managed to pack in the most drama, scandal, and plot twists in one episode then Judge Rinder would be right up there. Between Tipping Point and The Chase it is iconic ITV afternoon television watching. And if Judge Rinder's Crime Stories doesn't give you the chills I don't know what will. The sassiest judge in the business leaves no stone unturned as he gets to the bottom of some of the most bizarre court cases and delivers justice. But is Judge Rinder a real judge and court? It almost seems like he is too good to be true.

While I have been assured by friends who have gone into law that most court proceedings are not as entertaining as Judge Rinder makes them look, he is a real barrister, the Guardian reports. However, he is not a real judge. In his court room, he arbitrates small claims disputes for the cameras. However, the courtroom in MediaCityUK, Salford is part studio and any cases settled by one individual paying money to the other are settled by the production company, The Sun reports, which follows in the footsteps of Judge Judy. I can now see why it might be so appealing to have your feuds aired in front of Judge Rinder (and the nation). I reached out to ITV for comment, and will update this piece as soon as comment is available.

After studying politics, modern history, and art at Manchester University, Robert Rinder did a law conversion at City University and was later called to the bar. As the show would suggest, he has never shied away from tough or unorthodox cases, specialising in international fraud, money laundering, and other high profile financial crimes, his official biography discloses.

Having a knack for being able to hold and entertain an audience has served Judge Rinder well. In 2016 he released his book, Rinder’s Rules: Make The Law Work For You. With the aim of bringing his no nonsense attitude from the courtroom and into your home he spoke to The Sun and said, “there is a good chance that at least once a day, you are going to enter some sort of legal agreement, whether that is buying something from a shop, sitting down for a meal at a restaurant, or clicking on a set of terms and conditions online. So you need to know what to do when it goes wrong. This book is about knowing what your rights are, gathering the evidence and making your case.”

As far as working in the law goes, Judge Rinder has definitely taken a road less travelled. He said, “I am utterly unshockable. I have seen every sort of legal case and what I have learned is that anyone, no matter what their class or background, has the capacity to be stupid,” and after the cases he has tried, I believe him.

Whilst it all seems like fun and games, Judge Rinder's court room is dead serious and if you fancy going to watch from the stands (or in the audience) you can apply on the ITV website. The audition/casting period is still ongoing and ends in April 2021.

This article was originally published on Oct. 23, 2018