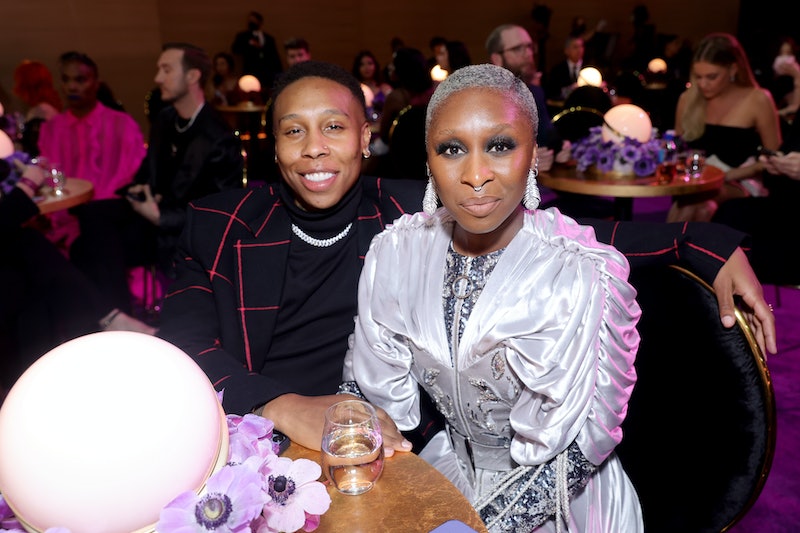 In 2017, when Lena Waithe took home the Emmy for Outstanding Writing For A Comedy Series for the groundbreaking “Thanksgiving” episode of Master of None, she stunned viewers by acknowledging her then-girlfriend Alana Mayo during her acceptance speech. “To my girlfriend Alana, I love you more than life itself,” she said. In 2019, they silently got married. But they split just two months after revealing their secret wedding, leaving fans with many questions, including whether Waithe is dating anyone now.

Currently, the 37-year-old Master of None star is keeping her love life quiet. However, that hasn’t stopped fans from speculating that she’s in a relationship with fellow Emmy winner Cynthia Erivo. Most recently, Waithe accompanied Erivo to the 2022 Grammy Awards, where the Broadway star performed as part of a tribute to late composer Stephen Sondheim along with Ben Platt, Rachel Zegler, and Leslie Odom, Jr. Erivo previously won a Grammy for Best Musical Theater Album as part of the Broadway cast of The Color Purple in 2017.

The actors first connected in 2018, when Erivo gushed about Waithe on Instagram, sharing a selfie of the pair. “I finally found my sis,” she wrote. “Lena you are absolutely everything. You are perfection. What a meeting of minds, glad to have you in my life! Stuck like glue!!! SHINE QUEEN SHINE!!” Fans then speculated that the friends were living together after they shared separate Instagram posts from the same theater room.

In July 2020, it was reported that Erivo was attached to star in Talent Show, an upcoming feature film penned by Waithe. According to Playbill, the Tony winner will play a singer-songwriter who returns to her hometown of Chicago to mentor a group of young musicians. Regardless of their relationship status, it’s clear that Erivo and Waithe are together — professionally.

Waithe and Mayo announced their marriage in November 2019, with The Chi creator revealing on The Ellen DeGeneres Show that they wed at a San Francisco courthouse and invoked a historic LGBTQ figure in their ceremony. “We snuck and did it,” she told guest host John Legend. “We got married right in front of Harvey Milk’s bust. It was her idea, as all good things are.” Their venue was also the same courthouse where the first same-sex wedding in the U.S. took place. “It was a humbling day, you know, to marry someone so amazing, but also to really appreciate all the work that so many people have put in for us to be able to do that,” she said.

In January 2020, the couple announced their separation in a joint statement to E! News. “After careful thought and consideration, we have decided to part ways,” they said. “We have nothing but support for one another and ask that you respect our privacy during this time.” Over ten months later, Mayo officially filed for divorce, which will reportedly be finalized on May 24. Neither one of them have commented on their split following their initial statement. Regardless, Waithe has been keeping busy with the three series that she’s created, The Chi, Boomerang, and Twenties, as well as the third season of Master of None, which placed more focus on her character Denise after she came out in the “Thanksgiving” episode.

More like this
Rhys Ifans Has A Good Reason For Keeping His Love Life On The DL
By Maxine Harrison
Here’s Everything Coming To & Leaving Netflix In October
By Jake Viswanath
Caleb McLaughlin Details Racism From 'Stranger Things' Fans
By Radhika Menon
The ‘Emily In Paris’ Season 3 Release Date Is Here, Plus The First Footage
By Bustle Staff
Get Even More From Bustle — Sign Up For The Newsletter