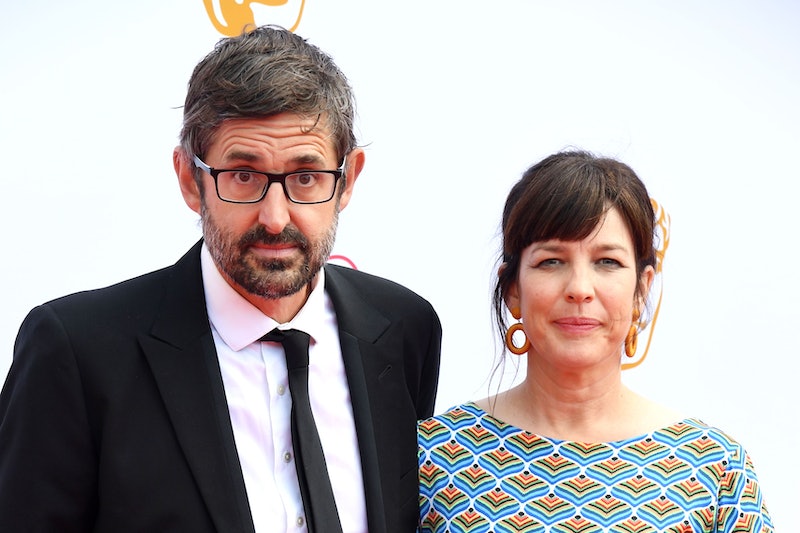 Renowned filmmaker Louis Theroux is best known for bringing some of the world’s most controversial topics into the limelight. Throughout his many insightful documentary series, the award-winning broadcaster has touched upon issues including politics, racism, celebrity, and much, much more. But what else is there to know about the documentarian himself? And is Louis Theroux married? Here's what we know about his life offscreen.

As OK! reports, Theroux is married to TV producer Nancy Strang. Theroux was previously married to Susanna Kleeman, whom he divorced in 2001 after a three-year marriage. He met Strang back in 2002 whilst they were both working at the BBC, and eventually tied the knot a decade later in 2012. The story of how they met is actually quite sweet. Speaking to Clara Amfo on her This City podcast, Theroux recalls spotting Strang "around London" and being stunned by her beauty. "She was sort of fashionable, but sort of not aggressively stylish. People didn’t really say 'hipster' in those days, but she had a touch of hipster," he told Amfo. The pair first spoke at an office Christmas party, and "went from there," he said.

Theroux and Strang have since gone on to have three children together (Albert, Frederick, and Walter), and as the Guardian reports, the Theroux clan moved back to Los Angeles from Britain in 2017. Speaking to the newspaper, the filmmaker revealed he was living in “a neighbourhood close to the Hollywood sign and the Scientology headquarters” — however, given his latest career venture, it’s safe to assume the family might’ve since relocated back to the UK.

Strang has enjoyed a 20 year-long career in television and has previously worked on several award-winning productions, including the likes of Timewatch, Imagine, and more. Back in 2019, Nancy co-founded the London-based production company Mindhouse Productions alongside husband Theroux, where she also works as the director of development.

Although the couple now both enjoy a close professional relationship, Theroux previously admitted that “it’s nice to have a break” from the routine of family life, and speaking to the Radio Times, he explained that being on the road whilst filming is not something he’d be willing to “give up lightly.”

"I have thought about whether it’s fair on the family, me being away a lot. But I get so much out of doing the work. I did stay in the UK for a year after having our third son, which was the right thing to do,” Theroux told the magazine, before adding that any potentially risky situations he faces during filming also aren’t enough to deter him from continuing his work. During the interview, he revealed, “Truth is, the way in which I am exposed to danger is probably exaggerated. I’ve never had a knife or a gun pulled on me. Which is pretty good going.”

Speaking to Who Magazine, Theroux did say he would not do "anything that's going to make my wife too uncomfortable." Though that doesn't mean he plans to slow down anytime soon. "Nancy thinks that (I will retire soon), and I don't know that I have the heart to tell her that I don't see it on the horizon."

More like this
Wait, Is Maya Jama Confirmed To Host 'Love Island'?
By Sophie McEvoy
'Inside Man' Was Inspired By 'Sherlock' In The Most Unexpected Way
By Catharina Cheung and Maxine Harrison
The ‘Ted Lasso’ Cast Singing Along To “Sweet Caroline” Is Pure Gold
By Sam Ramsden
How To Get Tickets To 'Strictly Come Dancing's Live Tour
By Sophie McEvoy
Get The Very Best Of Bustle/UK

This article was originally published on November 4, 2018