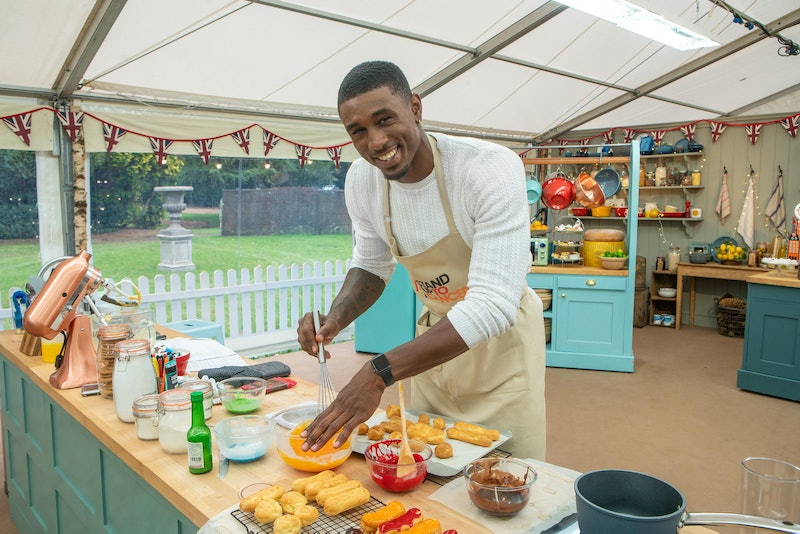 As reality TV line-ups go, The Great Celebrity Bake Off For Stand Up To Cancer 2020 is unmatched. With the likes of Tan France, Judge Rinder, Carol Vordemon, Louis Theroux, and Ovie Soko all in the same tent they'll be cooking up a storm of laughs. After much nudging on social media, it's finally been announced that the show will air on Channel 4 at 8 p.m. on March 10. Excited? Me. Never. What's more, The Celebrity British Bake Off trailer has finally arrived and I can confirm that the baking innuendos are going to be top-notch.

In the usual format, the contestants will head to the Bake Off tent to put their dubious cooking skills to the test in a bid to become Star Baker. The five-part series will also see the return of judges Prue Leith and Paul Hollywood, as well as presenters Noel Fielding and soon-to-depart Sandi Toksvig.

From the looks of the trailer, most of the contestants aren't dab-hands in the kitchen, with Judge Paul Hollywood doubting whether this year's celebrity line-up will "surprise him". The Bake Off tent will need to be primed for some serious disasters — soggy bottoms included. Although, Carol Vordermon looks confident as she's shown removing some "perfect" buns from the oven. Meanwhile ex-Gogglebox star Scarlett Moffat is seen having a tougher time: "How do you get your door stiff?" she asks in true GBBO style. And Ovie Soko can be seen in the relaxed and happy mode he became known for on 'Love Island.'

However, it's documentary-maker Louis Theroux who already appears to be the fan-favourite of the new series, with one Twitter user telling Theroux, that "this is the most excited I've been in my life."

In the trailer, Theroux is seen laying on the floor staring into the oven. "I like it on Bake Off when they do this — it's like they really care," he comments. Elsewhere, the contestant line up includes actor Richard Dreyfuss, former EastEnders actor Patsy Palmer, THE Judge Rinder, actors Caroline Quentin and James Buckley and Queer Eye fashion expert and creator of the 'Tan Tuck' Tan France. Tennis ace Johanna Konta will also appear along with singer James Blunt (yes, where's he been?), Strictly’s Joe Sugg, and comics Mo Gilligan and Joel Dommett. Presenters Carol Vorderman, Alex Jones, Alison Hammond, Kelly Brook and ex-Goggleboxer Scarlett Moffatt will also feature. Like I said, the line-up is unmatched.

I, for one, am looking forward to the Bake Off mayhem. The first episode will begin with Russell Howard, Jenny Sinclair, Louis Theroux and Ovie Soko competing. Set your calendars for 8 p.m. on March 10.

More like this
Yes, 'The Price Of Glee' Is Available To Watch In The UK
By Catharina Cheung
Spencer Matthews’ Impressive Net Worth Expands Far Beyond Chelsea
By Sam Ramsden
Molly-Mae & Tommy Fury Revealed Their Baby Girl's "Really Unusual" Name
By Sophie McEvoy and Sam Ramsden
Joey Essex Is Rumoured To Be Dating A 'Love Island' Favourite
By Sam Ramsden
Get The Very Best Of Bustle/UK
Sign up for Bustle UK's twice-weekly newsletter, featuring the latest must-watch TV, moving personal stories, and expert advice on the hottest viral buys.