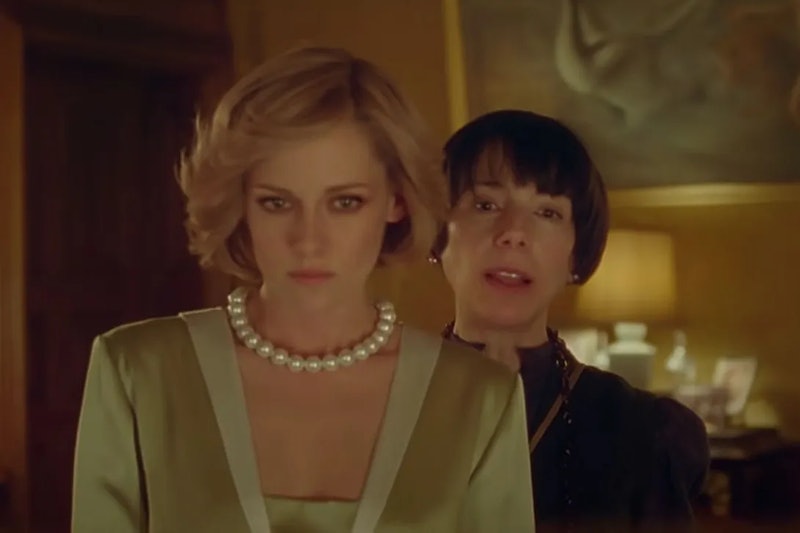 Whenever a work of art takes real life events for its subject, people always wonder how closely it sticks to the truth and how much creative license is taken. Spencer, which tells the story of Princess Diana’s torrid stay at Sandringham for Christmas 1991, is no exception. One very intriguing character when it comes to the question truth vs. fiction is Diana’s lady-in-waiting and royal dresser, Maggie (Sally Hawkins). In the film she is Diana’s one trusted confidant, and at one point, even confesses her love for the Princess. But is Maggie based on a real person?

In short, no. But in truth? It’s complicated and nuanced. “The relationship between royals and their dressers is incredibly intimate,” royal author Anna Pasternak told the Telegraph. “There is this bond of trust between them which is not just about clothes, it’s so much more.”

Pasternak also emphasises that a dresser can “never be a social friend” but did add that “there is this peculiar mix of intimacy and deference”. The Telegraph suggests that can be seen with Paul Burrell, one of Charles and Diana’s employees at Highgrove starting in 1987 and one of few to work for her following the couple’s divorce, and Anna Harvey, a former Vogue editor who famously helped Diana with her wardrobe. Other reports suggest Maggie was inspired by Fay Appleby, Diana’s real-life dresser and loyal friend whom she travelled the world with. Princess Diana was with her through the beginning of Appleby’s battle with cancer, too.

But in an interview with Vulture, Spencer screenwriter Steven Knight said Maggie isn’t based on one “specific” person, but was inspired by the memories shared with him by Sandringham staff. “I have to tread very carefully when talking about specifics because I got the information from people who were there on the understanding that there was no specific identification of anyone,” he said. “I will also say that those things that seem the most obvious are true.”

Speaking to royal historian Carolyn Harris, Vulture adds that we can’t be sure of the accuracy of Diana’s relationship with Maggie’s character because information about Diana’s precise relationships with palace staff isn’t “widely known”.

“Diana did sometimes speak informally with the staff,” Harris said. “She became increasingly concerned that her movements were being monitored, for instance, so she liked to be surrounded by people she could trust.”

Trust and confidence is, naturally, a major theme in the film as it was in the life of the real Princes of Wales. Though Tatler notes that her “inner circle” included many friends both in and outside of the Royal household — including her pre-engagement flatmates Carolyn Pride, Anne Bolton, and Virginia Pitman — it also included a few key confidants.

Anna Harvey was one, for instance. In her memoir, she recalls similar dilemmas faced by Maggie in Spencer: “‘We’re going to Balmoral and we have to dress for tea,’ Diana would say, and then we’d have to guess about the style of dress she should wear and find lots of options.” She also wrote about bearing to witness to intimate moments between the Prince and Princess of Wales: “Once, she put on a beautiful black velvet dress with a grey taffeta skirt. ‘Would you mind if I call in my husband to have a look?’ she said. Prince Charles came in, and stood there quite bemused, seeing her in this extraordinary dress and me on the floor pinning the skirt.”

The Palace sources Knight sought while writing the script, he said, had more often than not “been working in the same positions for a long time,” so they had a “great deal of empathy” with Princess Diana. “It’s as if someone from the real world has stepped into this unreal world, so therefore they’re rooting for her. When Diana first entered that world, she had a project to change it, to modernise it. We join her at the moment when it becomes apparent that’s not going to happen. Nothing will change.” From staffers’ eyes, “they’re looking at someone who, I think, they identify with. She’s a warrior without any weapons. She’s going into battle with nothing to protect herself.”

Knight hopes the film itself “sympathises with everyone concerned, including those in the family who are sort of obliged to repeat every day and know that tomorrow will be the same.”