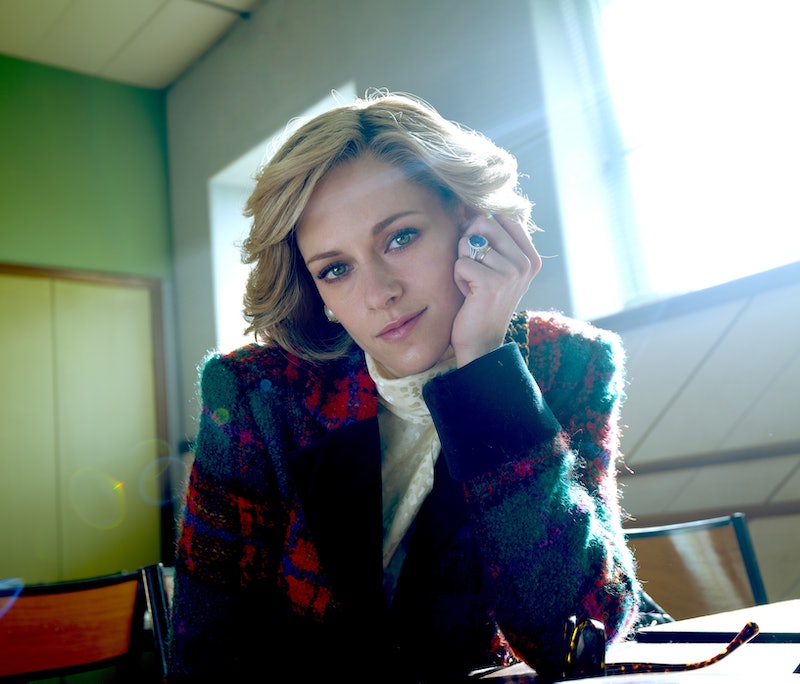 Princess Diana’s legacy is reverberating in pop culture like never before. Earlier this year, Prince Harry revealed that he and Meghan Markle could start a new life in America thanks to the inheritance left by his late mother. During that same Oprah Winfrey tell-all interview, Meghan wore one of Diana’s bracelets. And The Crown’s Emma Corrin thanked Lady Di during her Golden Globes acceptance speech for Best Actress in a Drama Series. That makes any details about Kristen Stewart as Princess Diana in Spencer valuable insight about the late royal’s continued legacy.

Stewart understands the responsibility of portraying the People’s Princess, speaking about her cultural impact during an appearance on Jimmy Kimmel Live! in November. “[Her death] happened really quickly,” Stewart recalled of the 1997 accident. “I didn’t grow up with her in the same way [because] I was really young when she passed away.” However, she remembered the rows of flowers that lined Buckingham Palace. “I remember being like, ‘What are all of those? I’ve never seen so many in one place,’” she said. “I didn’t really know what was going on. But now, it’s hard not to feel protective over her,” Stewart continued. “I mean, she was so young.”

Months later, production on Spencer, which is directed by Jackie’s Pablo Larraín and written by Peaky Blinders’ Steven Knight, shifted to the U.K. for its final days of filming and wrapped on April 27. Here’s what we know about Spencer, including which leading man the casting team tapped to play Prince Charles.

On Aug. 17, production companies Neon and Topic revealed that Spencer’s release date is Nov. 5, 2021, just a few months shy of a year before the 25th anniversary of Diana’s tragic death. Its premiere also comes amid increased conversation about the parallels between Princess Diana and Meghan Markle’s struggles in the limelight.

Spencer will focus on a tumultuous three-day span in Princess Diana’s life, long before she was candid about her time inside the royal family. According to a press release provided by Neon, “The film focuses on one weekend in the life of Princess Diana, as she spends the Christmas holiday with the royal family at the Sandringham estate in Norfolk, and decides to leave her marriage to Prince Charles.”

Larraín further opened up about the inspiration behind Spencer in June 2020. “It’s about finding herself, about understanding that possibly the most important thing for her is to be well, and to be with herself and by herself,” the director told Deadline. “That’s why the movie is called Spencer, which is the family name she had before she met Charles.”

Stewart’s resemblance to Princess Diana has taken the world by surprise since her casting was announced. The 31-year-old joins a long line of actors to play the late royal, including Emma Corrin in The Crown Season 4 and Naomi Watts in 2013’s Diana. Next up, Elizabeth Debicki will play Lady Di in the fifth and sixth seasons of The Crown.

Stewart opened up about playing the princess in a Toronto International Film Festival virtual discussion on Sept. 15, as reported by Entertainment Weekly, and pointed to motherhood as a “scarier” element of getting the story right.

“It was the only thing in her life that felt sure. She wanted to feel unconditional about something. Her strength, power, and feral, unstoppable force of nature really came out when she was with her kids because she wasn't very good at protecting herself, but she was very good at protecting them. As an outsider, I could feel it. That, I wanted to protect, and that was a scarier aspect of making the movie because if you don't get that right, you don't get her right."

There’s as much of an all-star creative team behind the scenes as there is in front of the camera. The film will be produced by Larraín alongside Juan de Dios, Jonas Dornbach, Janine Jackowski, and Paul Webster. An original score will be conducted by Radiohead's Jonny Greenwood (Phantom Thread). The cinematographer is Claire Mathon (Portrait of a Lady on Fire). And Oscar winner Jacqueline Durran (Little Women) will be recreating some of Lady Di’s best breakup revenge looks with the help of makeup and hair designer Wakana Yoshihara (Murder On The Orient Express). Finally, Spencer’s production designer is Guy Hendrix Dyas, the Oscar nominee behind Inception.

Ahead of the teaser trailer release on Aug. 26, production shared a few sneak peeks of the movie. The first photo of Stewart as Princess Diana in Spencer arrived on Wednesday, Jan. 27, and revealed the actor’s stunning transformation for the role. In the picture, Stewart sports a replica of Diana’s sapphire engagement ring that Kate Middleton now wears on her left finger.

Since the first image, other set photos have emerged that show Stewart filming on location in Germany, where the set for Sandringham is. In October, Stewart offered details on her Princess Diana prep in an interview with InStyle. "The accent is intimidating as all hell because people know that voice, and it's so, so distinct and particular,” she explained. “I'm working on it now and already have my dialect coach. In terms of research, I've gotten through two and a half biographies, and I'm finishing all the material before I actually go make the movie." She added, “It's one of the saddest stories to exist ever, and I don't want to just play Diana — I want to know her implicitly.”

On Aug. 25, Neon premiered the official Spencer trailer for attendees of its CinemaCon presentation. According to Deadline, the clip featured Stewart’s “pitch-perfect” British accent as well as sequences of the princess crying, parading down the palace halls in a silver gown, “traversing the estate grounds” in a yellow ensemble, getting swarmed by paparazzi, and dancing. Additionally, the production company released the film’s first official poster, which sees Stewart as Princess Diana bent over and seemingly crying in a white and silver gown.

One day later, Neon released the first teaser trailer for Spencer, and it shows Stewart as Lady Di navigating the disintegration of her marriage set to the tune of a reimagined “Perfect Day.” As Diana rushes down hallways looking visibly upset, the music swells and moody vocals and lyrics like “you just keep me hanging on” hint at what’s to come. The trailer ends with someone telling Diana, “They know everything.” In the first clip of Stewart taking on the distinctive accent, her character responds, “They don’t.”

The official full-length trailer was released on Sept. 23, and it’s a haunting portrayal of what Diana sacrificed “for the good of the country.” At the very end, Stewart’s Diana asks, “Will they kill me, do you think?”

This post will be updated with the trailer and additional plot details as more information on Spencer becomes available.