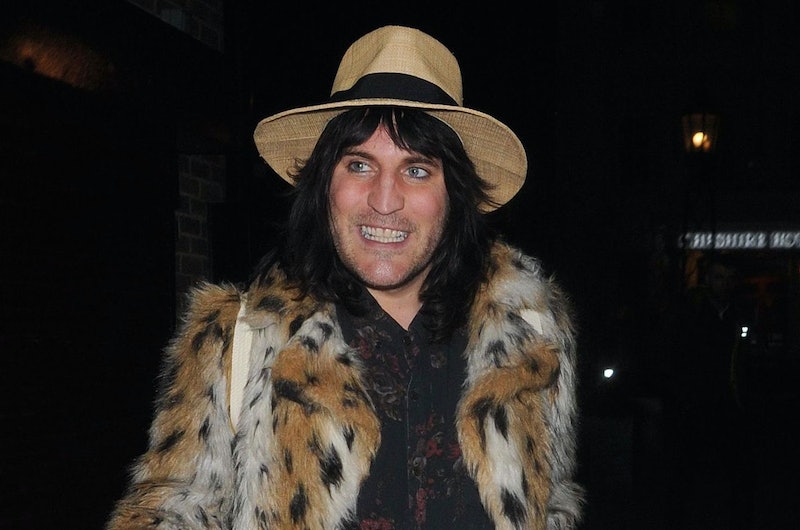 To some, TV's friendliest goth Noel Fielding is the ultimate catch. He's so sweet, super funny, and he knows the entire dance to Kate Bush's 'Wuthering Heights'. Honestly, what more could you want in a bloke? That said, is he even on the market? Actually, hold up, is Noel Fielding married?

Look, first thing's first: he's got a kid. And where do babies come from? Well, in this case it's Fielding's — sorry, everyone — girlfriend, Lliana Bird. According to the Sun, Fielding has been dating the writer, broadcaster and co-founder of Choose Love since 2010. However, the couple are incredibly private (and they have every right to be), which is why you don't see snaps of the pair out and about together.

Fielding and Bird are actually so private that they managed to hide the fact that they were expecting their first child together until she was eight months pregnant. Fielding and Bird welcomed their first daughter, Dali in 2018. And while lockdown has been quiet for many, it’d seem things are changing all over again in Fielding’s house. In Aug. 2020 Bird announced on her Instagram that she was expecting their second child.

In preparation for the new series of Great British Bake Off Bird wrote, “I’ve actually been baking a little something myself this lockdown so i’m starting my mat leave from @radiox this week. And whilst I’ll keep on posting my lazy mum recipes for you all here on insta, I'm also delighted that the bad ass lady that is @pollyjames will be keeping my show seat warm in the coming months on the #SundayChill. Wishing her love and luck and please show her lots of support. Meanwhile i’ll keep posting lazy mum recipes and videos as often as i can on here so see you soon!”

After the birth of their first daughter, the Sun reported that Fielding and Bird landed on a name based on Fielding's favourite artists Salvador Dali. A source told the paper: "Noel thought the name was a perfect fit. Salvador has played a big part in his life, so it’s no surprise to his friends he’s named a baby after him. It’s a cute name and really suits the tot." I have contacted Fielding’s rep to confirm this, but his spokesperson has not commented as of yet. Who knows? The new baby may have an equally artistic inspired name?

Speaking about Dali on the Jonathon Ross Show he said, “She is very beautiful and she blows my mind about a hundred times a day. It's a new level of tiredness that I've never experienced. I've done a lot of all-nighters in my life. In a way I've been in training for this moment all my life."

The presenter’s close pal, Kasabian member Serge Pizzorno, has opened up about how much Fielding loves Dali (the painter). When Fielding was figuring out whether or not he should take the GBBO job (he was concerned that he would be seen as a sell-out) he reportedly took inspiration from Dali, who famously did some work in advertising. "We figured Salvador Dali did a chocolate advert, so that sort of makes it all right," Pizzorno told Nick Grimshaw on Radio 1's Breakfast Show in 2019.

But back to Fielding’s love life. While there are some glamorous ladies he 's been romantically linked to in the past, including Courtney Love, according to The Sun, he's never been married, and it doesn't look as though there are plans for him to tie the knot anytime soon either. However, he has well and truly settled down with girlfriend Bird, their daughter, and soon-to-be new arrival.

If they were to marry though, it'd definitely be one amazing wedding. I'm thinking two black dresses for the bride and groom, a wedding cake made out of green goo, and David Bowie-inspired for their first dance (just imagine the bemused looks on Paul Hollywood's face).

In a time when it’s truly needed, Great British Bake Off returned to Channel 4 on Sept. 22 and will air every Tuesday 8 p.m. You can get your Fielding and sugar fix right there.

More like this
4 Surprising Celeb Throuples That Got The Internet Talking
By Sophie McEvoy
Taylor Swift & Harry Styles Had A Secret Reunion At The Grammys
By Shahed Ezaydi
Maya Jama’s Net Worth Definitely Won’t Give You The Ick
By Sophie McEvoy
Twitter Is Saying The Same Thing About Beyoncé's Renaissance World Tour
By Shahed Ezaydi
Get The Very Best Of Bustle/UK
Sign up for Bustle UK's twice-weekly newsletter, featuring the latest must-watch TV, moving personal stories, and expert advice on the hottest viral buys.

This article was originally published on Aug. 17, 2018