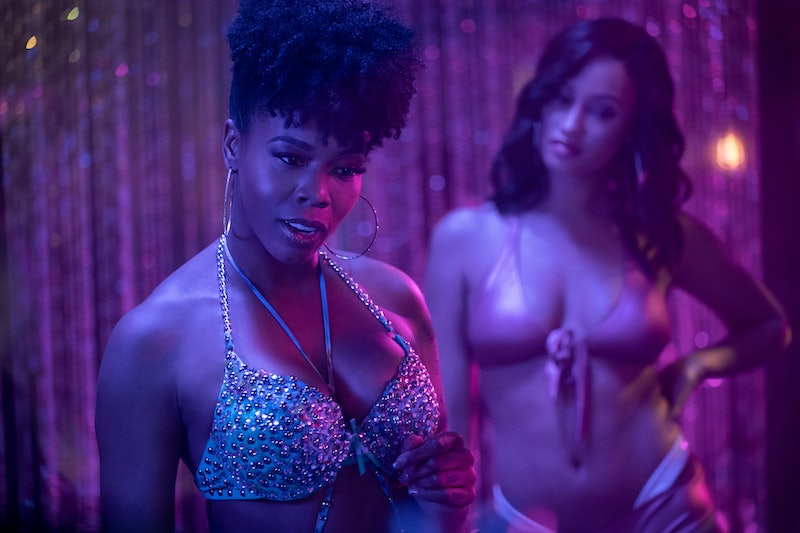 Stripping is both a spectacle and a means of survival in the new Starz drama P-Valley. The show is centered on the Pynk club in Mississippi, where the lives of queen bee Mercedes (Brandee Evans), disruptive newcomer Autumn (Elarica Johnson), and owner Uncle Clifford (Nicco Annan) all collide. It's also inspired by the true stories of various women playwright Katori Hall spoke to while writing her 2015 play Pussy Valley, from which the show is adapted.

Growing up in Memphis, Tennessee, Hall knew that strip clubs were a part of the cultural fabric of her city, but it wasn't until she attended a pole fitness class that she realized how difficult pole dancing really is. “It’s hard as hell,” she told The New York Times. “I actually remember having to leave the class because I got so nauseated.” This led to a curiosity about professional sex workers, and so for six years, Hall visited strip clubs throughout the American South, interviewing over 40 women about their lives and their work.

What she discovered, as Hall explained to TV Insider, is that these women practiced constantly to achieve a high level of athleticism and artistry, only to then be devalued as low brow entertainment. Hall also realized that a lot of strippers are women of color, and that they dance in order to support themselves financially. "In an economically dire situation, you do what you have to do," Hall said. "The plight and these women who are in the sex work industry, I felt was an important world to dig into and to put forth with empathy and heart." Hall noted that sex workers have historically been dehumanized, and so as long as they're ignored by the general public, "They can be taken advantage of."

P-Valley shows these women's struggles in a number of ways. The cuts and bruises from Keyshawn's (Shannon Thornton) abusive boyfriend sometimes make it too painful for her to go on stage. Autumn's post-traumatic stress disorder and cycles of panic attacks make it difficult for her to look as free in her performances as Mercedes does. And Uncle Clifford, who is gender non-conforming, fights to keep Pynk's doors open for their workers while the mayor — their cousin — shrugs and tells them that sometimes progress means certain people are "erased."

Through P-Valley, Hall hopes that she can make sex workers feel less invisible — or at least help change the culture around and perception of their work. Though the show's characters don't seem to be directly based on any specific women, Hall told the Times that it's a raw and honest portrayal of that world. Ultimately, she hopes that by telling women's real stories set in a fictional club, viewers will be more thoughtful in how they think about and treat sex workers.

"I want people to look at Uncle Clifford, Mercedes, Autumn Night, Miss Mississippi and see themselves," Hall told Essence. "For me, this is a humanization project...it’s about making these unreal characters create a bridge of empathy and understanding for women who haven’t had that opportunity to be seen as the full [human] beings that they are."