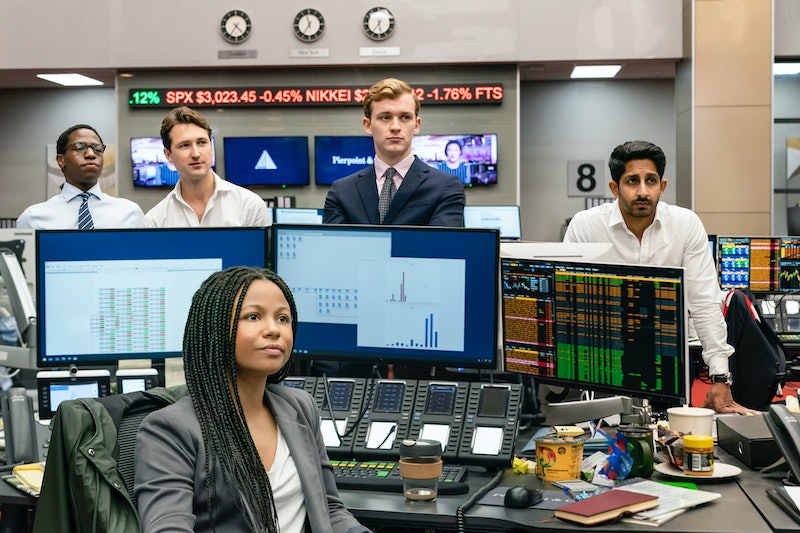 HBO's new drama Industry centers around Pierpoint & Co, a prestigious London bank where five graduates are competing for entry level positions. The company itself is fictional, but series creators Mickey Down and Konrad Kay wanted it to reflect the realities of the financial industry after the 2008 crash. "We were adamant that we wanted to get 100% of everything right that we could texturally about the world," Kay said during a press tour, per the RadioTimes. "The production design, the jargon, the cadence of the language, the way people speak to each other. Coming from that world, we wanted people who watched in that world to be like, ‘OK, they are getting a lot of it right so I’m gonna go with it.'"

It's also a world they both have experience with. As Down explained to The Knockturnal, he and Kay met at the University of Oxford in 2007. Though they were both unsure about what they wanted to do after graduation, they gravitated toward entry level finance because "loads of people were doing it" and it "was a big, shiny job that made us feel like adults," Down said. He only worked for a year before deciding to create a short film about his experiences that ended up on YouTube and was eventually sold to NBC. Three years later, he convinced Kay to also leave his banking job and join him as a full-time TV writer.

Though it's been a while since they were on the trading floor, Kay noted that the nature of the business hasn't changed much. It's still a hugely competitive field in which your paycheck lets you know whether you had "a good year or a bad year" compared to your peers. That "kind of tension between the collective and the individual hasn’t changed as far as I can tell in 2020," Kay said.

This leads to a cutthroat environment at Pierpoint, with the graduates struggling to get ahead while maintaining — or sacrificing — other areas of their lives. "There’s plenty of swagger and braggadocio about these bright young things," Patrick Smith wrote for The Independent. "One early review described Industry as a cross between Billions and Skins, but to my mind it’s closer to a millennial Mad Men in its depiction of young people whose entire identities are built around work."

Ultimately, Down and Kay wanted to honor the minute failures and triumphs that come with being at the bottom of the pyramid. "The challenge was to honor the small moments like where someone’s finger slips on a keyboard feel as big as insider trading deals or the FBI raiding your office," Down told The Playlist. "Hopefully that all adds to that universality of the whole project."