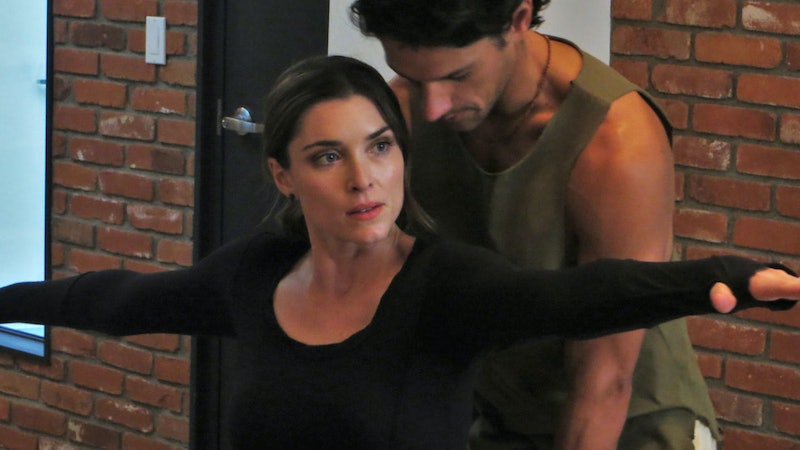 Lifetime seems to pride itself on its goofy crime movies, frequently giving them absurd titles like Baby for Sale or Deadly Daycare, but the latest Lifetime movie may take the cake for over-the-top names. It's called Psycho Yoga Instructor, and as you probably guessed, is about a sociopath yoga instructor who develops a dangerous fixation on one of his married students. Fans can expect the same type of guilty pleasure melodrama they get from other Lifetime movies, but should they also expect something deeper? Is Psycho Yoga Instructor based on a true story?

Lifetime does not appear to have claimed that Psycho Yoga Instructor was based on a true story, so it likely isn't. That's not entirely hard to believe, as the story does sound fairly absurd. Here's the full synopsis:

"Justine Grace is desperate to sort out her life, her marriage to her husband Tom, and herself. When Domenic, a handsome yoga teacher, takes an interest in her, it seems like he might be the one to finally bring happiness to her life. However, he has ideas that go beyond yoga. Justine must find the strength within herself to save her marriage, save her life, and survive a sociopath as he tries to seduce her into the perfect pose."

As ridiculous as Psycho Yoga Instructor may sound, there are actually several examples of real-life instances of yoga instructors behaving badly that Lifetime could have used as inspiration for the film, had they been so inclined.

One story that seems more like a Lifetime movie plot than an actual true life tale is the story of twins Alison and Ann Dadow. The two sisters had operated troubled yoga studios together, first in West Palm Beach, FL in 2011 and then in Park City, UT in 2014. The pair then moved to Hawaii shortly after declaring bankruptcy on their Utah studio at the end of 2014, according to The Cut. They started using new names — Alexandria and Anastasia Duval, respectively — and were planning to open a new studio together, The Cut also reports. But then things took a dark turn. In May 2016, Alison (Alexandria) allegedly drove her car off a cliff in Maui while Ann (Anastasia) was in the passenger seat. Alison survived the crash while Ann was killed, and witnesses claimed to have seen a struggle in the car before the crash. Alison was arrested and charged with second-degree murder, but in 2018 she was found not guilty of the crime, according to the Palm Beach Post.

Psycho Yoga Instructor probably isn't based on a true story, but given the sordid history of actual yoga instructors like the Dadow twins, few would be surprised if it were.