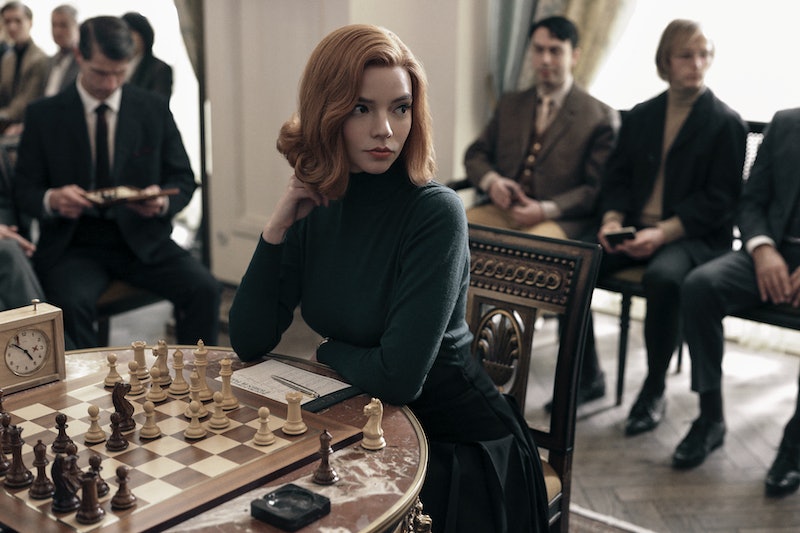 Netflix's new limited series is much more than a clichéd sports drama. Based on a 1983 novel, The Queen's Gambit follows orphaned chess prodigy Beth Harmon (Anya Taylor-Joy) as she copes with substance misuse while navigating the male-dominated world of chess in the 1960s. It's drawn in part from the experiences of author Walter Tevis, a college English professor-turned-novelist. Born in San Francisco in 1928, he grew up in the Sunset District by Golden Gate Park and went on to graduate from the University of Kentucky. After starting his career in college literature there, he moved on to Ohio University. On the side, he published short stories in Esquire and Cosmopolitan, and eventually started writing novels like The Hustler and The Man Who Fell to Earth. (Both books were adapted into films.) Tevis eventually realized that being a professor left him little time to focus on his true passion, so in 1978 he moved to New York City and became a full-time writer.

It was during this time that he created The Queen's Gambit, with Beth being the exact kind of underdog Tevis enjoyed writing about. ''I write about losers and loners — if there's a common theme in my work, that's it," he told The New York Times in 1983. "In one way or another, I'm obsessed with the struggle between winning and losing. In The Queen's Gambit, my heroine is an outsider."

Tevis imbued Beth with his own personal struggles. After being diagnosed with a rheumatic heart at a young age, he was given "heavy drug doses" for the condition. "That's where Beth's drug dependency comes from in the novel," Tevis told The Times. "Writing about her was purgative. There was some pain — I did a lot of dreaming while writing that part of the story."

Additionally, Tevis himself was a lifelong, self-taught chess player, and in the novel, he name-checks strategies like the Sicilian Defense, the Ruy Lopez, and the classic Queen's Gambit opening for which the book is named. Aware of how unique a game chess could be, Tevis explained to The Times that The Queen's Gambit was a "tribute to brainy women"; he was interested in showcasing Beth's "bravery and intelligence," particularly in a time when women weren't valued for such traits. (In an interview with The Observer, Taylor-Joy noted that Beth "just naturally is a feminist" for her willingness to push back on such expectations.)

At least one "brainy woman" was among Tevis' early opponents. He told The Times that he first started playing chess with his sister and other kids from their block. After years of practice, he eventually became a Class C player and even once won a $250 prize.

"I've played well enough to know what a good game is," he told The Times. "I can beat the average person, but I'm afraid to play those guys who set up boards in the street on Broadway.''

Ultimately, Tevis died long before he could ever see Beth checkmate her opponents on the small screen, succumbing to lung cancer just a year after the publication of The Queen's Gambit. "Walter Tevis was an underdog who beat the odds," Tevis' son Will wrote in a guest post on Stanford's Book Haven website in 2019. "The characters that he created – Eddie Felson, Jerome Newton, and Beth Harmon – all had an internal drive that launched them to overcome unbelievable odds, but still not live happily ever after. Walter Tevis was the struggling underdog, too. He overcame inner demons to win in his literary field, only to die far short of a satisfying life."

It's this aspect of the story that so appealed to Scott Frank, one of the limited series' two co-creators as well as the writer and director. He got the idea to get involved and make a miniseries instead of a movie, as was previously envisioned.

"If you did it as a movie, it becomes a sports movie: 'Is she going to beat the Russian guy?'" Frank told The New York Times in October. "And that's not what the book is about. For me, it's about the pain and cost of being so gifted."