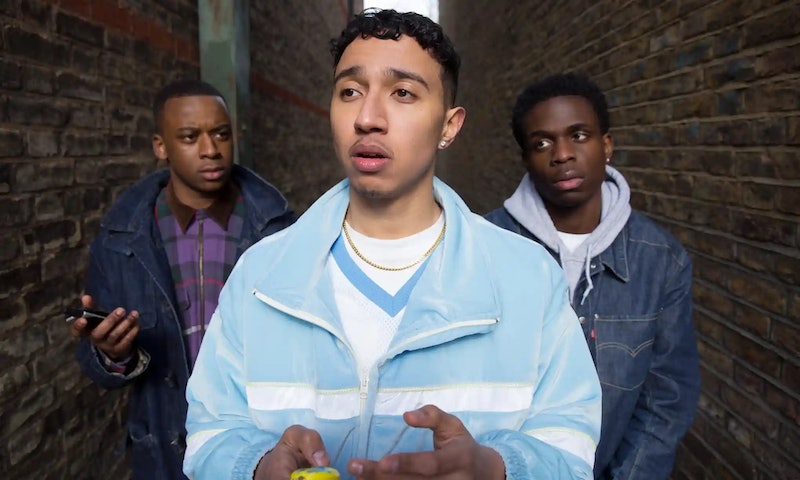 Broadcaster, film-maker, and beloved TV presenter Reggie Yates is soon to make his directorial debut with brand new film Pirates, scheduled to be released in cinemas on November 26. The British comedy-drama is set in London on New Year’s Eve 1999, when UK Garage music was at its peak (think So Solid Crew, Artful Dodger, Ms. Dynamite, Wookie, Dj Luck & MC Neat...) and follows three 18-year-old best friends who are trying to break into the music scene through Pirate radio.

The film, written by Yates, is said to be a nostalgic celebration of the “infectious garage bangers”, club raves, and the loud Moschino suits that defined the era, but is Pirates based on a true story?

For those who partied to UK Garage music in the ‘90s and early ‘00s, the Pirates film will most likely feel familiar, however, it is not based on a true story as such. It is based on Yates’ fond memories from growing up on a multi-cultural council estate in North London, though. Speaking to The Guardian about the new film, Yates, 38, explained that the film relives the “joy” of that time, whilst also celebrating UK Garage music in a way that hasn’t been seen before.

“I’d never seen garage music in anything connected to film before,” said Yates, per The Guardian. “It breaks my heart that it’s just not been celebrated in the way that ska has been, or grime, or punk.”

Yates, who was 17 in 1999, speaks highly of the “pre-internet” culture that would see the most stylish “wear the tags still on their clothes to show that they were new.”

He added: “This film, a coming-of-age comedy about three young men of colour, didn’t exist when I was a teenager. We’ve had the trauma stories about the darker side of growing up in the inner city. But there are still lots of young men who are filled with joy, who just want to have fun, get the girl and listen to some banging music while they do it.”

Small Axe’s Elliot Edusah (Cappo), Gangs Of London‘s Jordan Peters (Two Tonne) and EastEnders‘ Reda Elazouar (Kidda) star in the upcoming film which was made during lockdown. As the synopsis goes, “they drive through the city in a desperate hunt for tickets for the best millennium party ever, aware that their futures will not stay the same forever.”

More like this
Eurovision Has Been Given A Whole New Look Ahead Of Its Liverpool Debut
By Bustle UK
ITV's 'Maternal' Was Inspired By A Very Simple – & Unanswerable – Question
By Maxine Harrison
Yes, 'The Price Of Glee' Is Available To Watch In The UK
By Catharina Cheung
Twitter Is Saying The Same Thing About Beyoncé's Renaissance World Tour
By Shahed Ezaydi
Get The Very Best Of Bustle/UK
Sign up for Bustle UK's twice-weekly newsletter, featuring the latest must-watch TV, moving personal stories, and expert advice on the hottest viral buys.