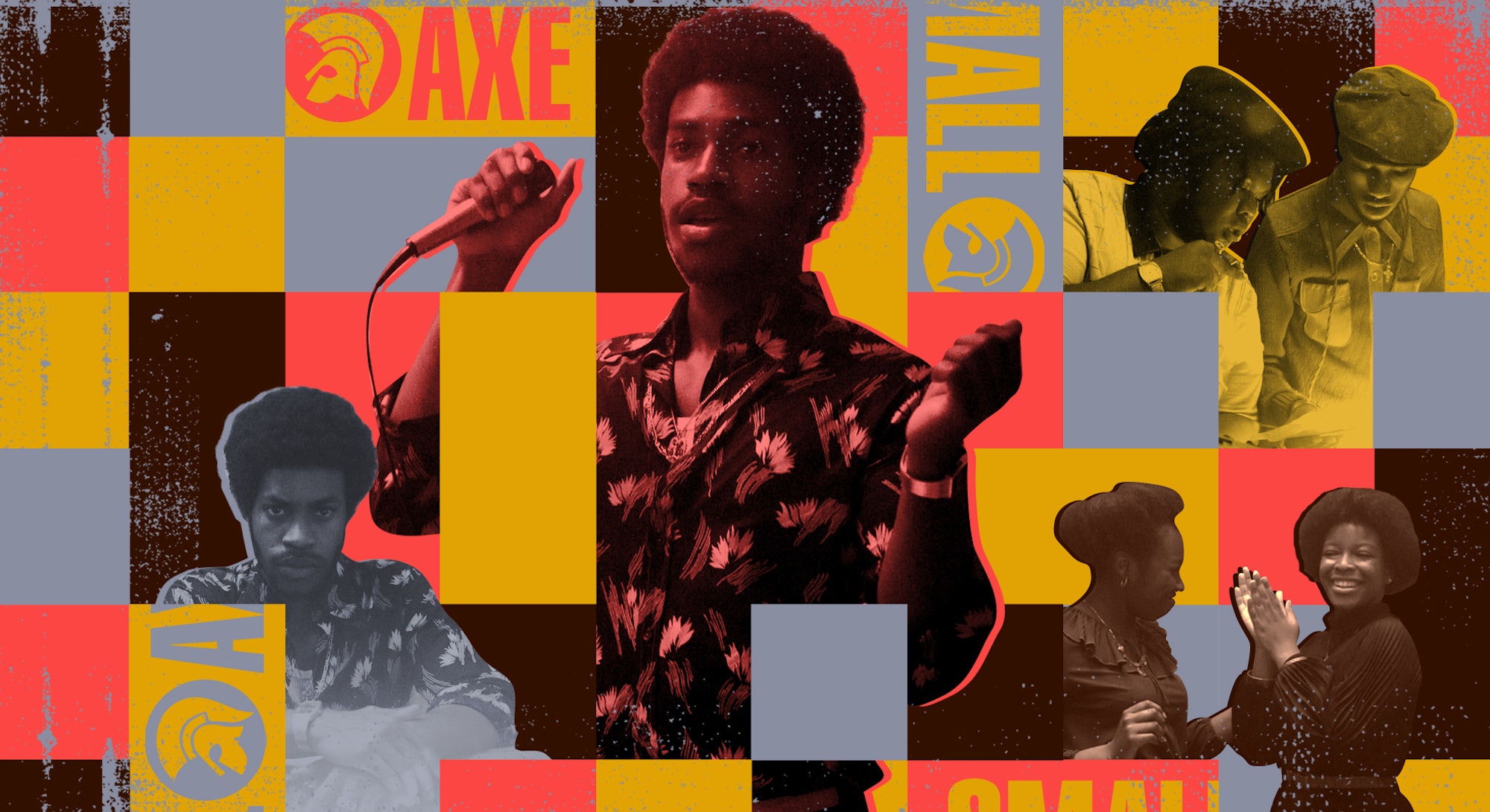 Acclaimed director Steve McQueen’s six-part film series Small Axe documents the histories of the Black Caribbean diaspora in the UK. Through fictional stories of nightlife and films based on real historical events like the New Cross Fire and the Mangrove Nine, each chapter offers a snapshot of moments that make up the history of the diaspora.

Interlacing and connecting each tale is the gentle hum of music. The songs and melodies play as crucial a part in Small Axe as the events taking place, from the slow romances in dimly lit corners in Lovers Rock to the sounds of protest in Alex Wheatle.

Lovers Rock is probably the film that most notably has music at its core. It’s a snapshot into the nightlife of the Caribbean diaspora. Often shunned from clubs and bars, they had to make their own in their homes which were known as blues parties. Lovers Rock is set to the heady falsettos of Janet Kay’s Silly Games, a song laced throughout the film. From women cooking in the kitchen to hips slowly moving in the early hours, the sensual tones of lovers rock music ooze through the scenes.

What made the genre known as lovers rock, (named by Dennis Bovell, writer of Silly Games) so important, was that it was an intricately Black-British sound. In 1970s Britain, a mixture of Reggae, soul, pop, and disco merged together to create the style. It had a more apolitical element to its lyrics – this was about love.

From women cooking in the kitchen to hips slowly moving in the early hours, the sensual tones of lovers rock music ooze through the film.

Janet Kay was one of the most notable figures in the romantic genre. Speaking to the Guardian about her hit, Silly Games, she said: “I think what made it special back in the day, was that it was a music that was created by second-generation West Indians in this country”. The children of immigrants in a new country were finding their own sound. “As kids we were fed rocksteady, soca, calypso, pop, R&B and Motown – what made lovers rock was the mix of all of those things that we were exposed to growing up.”

Sister Sledge, He’s The Greatest Dancer and Kung Fu Fighting A Disco Tune by Carl Douglas also make an appearance in Lovers Rock, an illustration of the eclectic tastes that come with being on a different island. At the same time as the lovers rock genre took flight, there were other interlinking subcultures including rude boys and rude girls. Originating in Jamaica — they were fans of two-toned ska. This was introduced into Britain, eventually influencing the skinhead and mod subcultures.

Sound System culture also is seen throughout Small Axe in both Lovers Rock and Alex Wheatle. The real-life Brixton novelist of the title founded the Crucial Rocker sound system, performing under the name Yardman Irie. Sound System culture began in Kingston, Jamaica in the ‘50s and came over to Britain with the Windrush generation. Reggae music would be blasted out from earth trembling sound systems — it was a community for the diaspora who were excluded from Britain’s nightlife. By the ‘60s and '70s, as writer Chris Parkin explains, DJs and selectors were as important as the music being played, as seen in Lovers Rock.

Small Axe doesn’t just use songs from the islands. In Red, White And Blue — which centres on Leroy Logan, a young Black man who joins the Metropolitan police force — the songs accompanying scenes are soulful and melancholy. Al Green, an African American Reverend and soul singer, croons to How Do You Mend A Broken Heart? And I’m So Tired Of Being Alone, both perfectly symbolising the ostracisation and loneliness Logan feels from both his family and his colleagues.

The songs of a generation peppered throughout Small Axe give a more 360 view of what it is to be Black-British and Caribbean. Loved by the diaspora, these songs had an intrinsic part to play in British culture. Music is political, music was finding a home in a place that often felt hostile.

You can watch the final part in the Small Axe series — Education —9p.m. December 11 on BBC One, and see the previous films on BBC iPlayer in the UK and on Amazon Prime in the U.S.