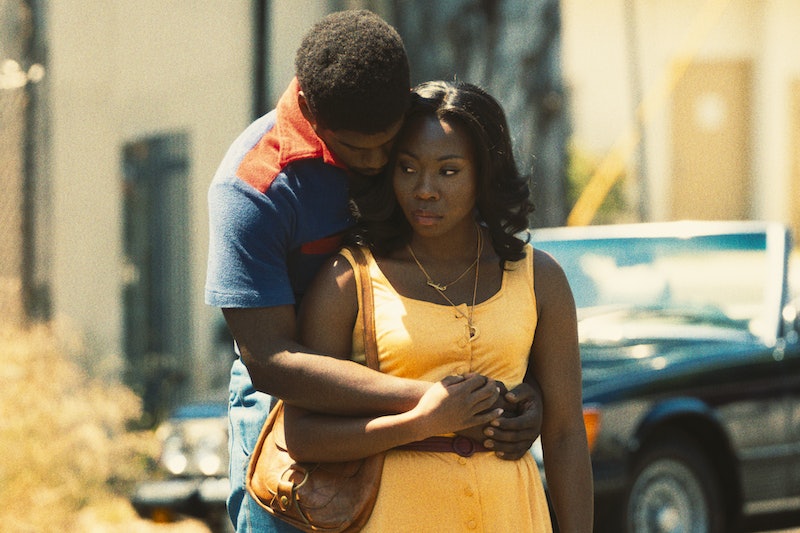 The pressure was on during Winning Time Episode 7 — and not just because the Lakers were facing a high-stakes string of games in Indiana, Detroit, and Boston (ultimately winning just the last one). While interim coaches Paul Westhead and Pat Riley navigated leading the team in Jack McKinney’s absence and Magic Johnson’s star continued to rise, another kind of tension was brimming off the court: Magic and Cookie’s relationship.

During “Invisible Man,” the budding couple is still in their early days — and Cookie is ambivalent about things. “The way the world moves around you: big people, little people, just circling around you like the sun,” she tells him at one point. “And for you, it’s as natural as breathing. And I just don’t know where I fit in all that.”

Throughout the episode, she’s also wary of other women vying for Magic’s attention on the road — and her friend Rhonda is there for some much-needed moral support. She reminds Cookie that she introduced the pair (jokingly requesting a “finder’s fee”) and even defends Cookie when a woman jokes about going home with Magic at a game.

Basically, Rhonda seems to be a close, loyal friend. But then she shows up at Magic’s family holiday party alone, telling Magic that Cookie “had someplace else to be.” It’s implied that they spent the night together, too, as Rhonda leaves his hotel bathroom in her underwear in the morning — only narrowly missing her friend, who had stopped by to patch things up with Magic. (Extra ironic because Rhonda herself warned Cookie against Magic’s “wandering eye” earlier in the episode.)

So, uh, is Rhonda from Winning Time a real person? And are Rhonda and Cookie friends today?

It definitely seems possible that there was a Rhonda-like figure in Cookie’s life. In 2017, Cookie told Mocha Man Style that she met Magic when they were both college freshmen at Michigan State University — and the story tracks with Rhonda’s claim that she introduced the pair. “He was standing there by the doorway when I walked in with a friend of mine,” Cookie recalled. “She was a gymnast, so she knew the basketball players. She walked up and said hello, and we went inside.”

An anecdote from Cookie’s memoir, Believing in Magic, also sounds similar to Magic and Rhonda’s apparent tryst in Episode 7 (though, it happened in college, not during his nascent basketball career). As Cookie wrote, via Daily Mail, she once found a woman in Magic’s dorm room three months into dating — wearing a robe and “standing there like she paid rent, like that was her place and she was his girl.” Magic reportedly said she was “just a friend.”

It’s unclear if Cookie is still friends with the person Rhonda is based on today. In fact, it’s possible that Rhonda isn’t *one* person but an amalgamation of different people in Magic and Cookie’s life together. Either way, don’t expect the couple to weigh in with specifics. Just know that Magic recently stated Winning Time is filled with “so many lies and not the truth, and so many things made up.”

Predictably, Magic isn’t watching Winning Time. As he told Entertainment Tonight in March, “it’s hard to duplicate” that era of Lakers history for TV — a line that probably applies to his personal history, too. If you want more of the Johnsons’ side of the story, you’ll have to check out Apple TV’s They Call Me Magic documentary.

More like this
Britney Spears Met The Weeknd & Sam Levinson, So She May Actually Be On 'The Idol'
By Jake Viswanath
What Is Jeanie Buss' Net Worth? The Lakers President Is Uber Rich
By Hugh McIntyre
Marvel's 'She-Hulk' Trailer Is Finally Here & The Hulk Lends A Big Helping Hand
By Grace Wehniainen
Kendall Jenner Isn’t Ready To Have A Baby Amid Her Mom’s Wishes
By Jake Viswanath
Get Even More From Bustle — Sign Up For The Newsletter