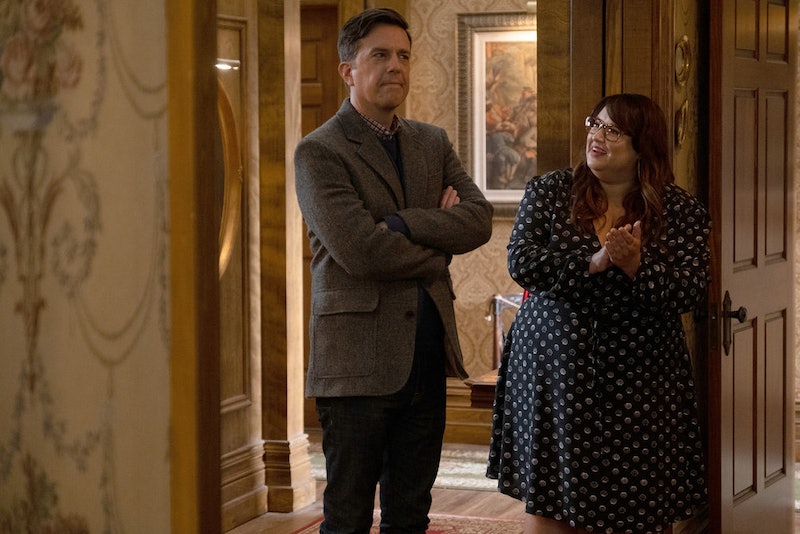 via the NBC Universal press site

The premise of Rutherford Falls doesn’t sound like a stretch from recent headlines: A small town’s attempt to remove the statue of a founder ignites a firestorm, kicking off a battle between the “preservationists” and the “progressives.” The town of Rutherford Falls and its struggles to correct the historical narrative aren’t based directly on any one of those stories. But they are intentionally drawing from the cultural questions that pop up around those events.

The idea for Rutherford Falls started with producers Michael Schur and Ed Helms (who also stars) thinking about the so-called “backfire effect,” a psychological phenomenon in which people who are confronted with information that goes against their core beliefs double down and refuse to believe the new information, even when it’s verifiable and indisputable. In the age of QAnon and other conspiracy theories like it, it’s easy to see the parallels to how the backfire effect can prevent people from reconciling facts with the often whitewashed history of the U.S.

“[Schur and Helms] started to kind of realize the story might have certain Native American elements to it,” co-creator Sierra Teller Ornelas, who worked on Brooklyn Nine-Nine with Schur, told The Hollywood Reporter. “A lot of the themes of what they were talking about — what is American history, why do we cling to certain narratives, and what happens to other narratives that get completely marginalized by doing that — I grew up in museums and my mom is a master Navajo tapestry weaver … it was just a world I was really well versed in.”

From there, Teller Ornelas joined Helms and Schur, and the three began developing the story for more than a year before they pitched it. All along the way, Teller Ornelas pushed for Native perspectives to be given just as much weight in the story as the white ones. So while the core character of Nathan Rutherford (Helms) and his love of lore and legacy never really changed, his best friend Reagan Wells (Jana Schmieding) was not originally Indigenous.

“We didn’t want the Native stories to be de-centered,” Schmieding, a Cheyenne River Lakota Sioux comedian, told the New York Daily News. “It was really important that our voice has equal ground to the white voice, especially when we’re in conversations about history. That’s sort of the point: to challenge history and the beliefs that we hold true and to see how different people react to a challenged narrative.”

The big themes of identity, defining yourself, and relating to historical narratives will all be filtered through the show’s comedic lens — a tough balance to strike, but given that Schur is also the creator of the existential comedy The Good Place, he’s familiar with balancing humor with heavier subject matter. And according to cast member Michael Greyeyes, who plays the CEO of the fictional Minishonka Nation’s mid-level casino, that balance is paying off.

“It took me a while to get through every script because I just kept laughing,” Greyeyes told the Toronto Star. “Sometimes I was crying for joy, because it’s a kind of representation that I’ve been waiting 30 years to come out of Hollywood.”

More like this
Hallmark’s The Way Home Is Like 'This Is Us' Meets 'Back To The Future'
By Grace Wehniainen
Everything To Know About 'The Real Housewives Ultimate Girls Trip' Season 4
By Jake Viswanath
Andy Cohen Apologized To Larsa Pippen After A 'RHOM' Season 5 Reunion Dust-Up
By Brad Witter
The Plane Crash In 'Dear Edward' Is Based On A 2010 Tragedy
By Grace Wehniainen
Get Even More From Bustle — Sign Up For The Newsletter
From hair trends to relationship advice, our daily newsletter has everything you need to sound like a person who’s on TikTok, even if you aren’t.