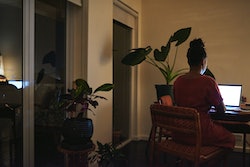 From the myth that Bill Gates is "planting microchips in vaccines" (which is absolutely false), to the tangled, erroneous web of QAnon, it seems as if everywhere you turn these days, conspiracy theories are popping up like mushrooms. But why do some people reject conspiracy theories without a second thought, while others embrace them wholeheartedly? How the brain reacts to conspiracy theories can shed some light on what causes people to believe them.

Joshua Hart Ph.D., a professor of psychology at Union College, tells Bustle that conspiracy theories are often very psychologically appealing. "In a dangerous, chaotic, and unjust world, people look for explanation. Conspiracy beliefs at least beat the alternative conclusion that life is wantonly unfair and cruel and nothing can be done about it," he says.

How Your Brain Reacts To Conspiracies

The brain makes sense of stimuli by looking for patterns it can predict, neuroscientist Shannon Odell Ph.D. tells Bustle. "The brain takes in sensory information, and then compares it with the information it has previously received in order to make a prediction of the future, or to help us come to a decision," she says. Odell says neurotransmitters, including dopamine, are involved in pattern processing as well.

When somebody finds an idea about the world particularly appealing, their pattern recognition areas are operating at full speed — and seeing patterns that aren't necessarily there. A study published in European Journal of Social Psychology in 2018 found that people who found order in random sequences, like coin flips, were also more likely to believe conspiracy theories. "Clinically this is known as illusory pattern perception," neuropsychologist Sanam Hafeez Ph.D. tells Bustle. Dopamine is a part of this pattern processing, and Hafeez says that people with higher levels of dopamine in their brains have been shown to be more likely to believe out-there theories.

Why It's So Hard To Argue With A Conspiracy Theorist

When a conspiracy believer's ideas are challenged, their pattern recognition brain areas aren't the only parts in play. People who subscribe to conspiracies tend to think intuitively or emotionally rather than analytically, according to a 2014 study in Cognition. This is why your arguments with that uncle often get so personal. Arguments can also cause what Emily Thorson, a political scientist at Syracuse University, calls "belief echoes," where people obsessively and emotionally hold on to information that they know to be false.

A study of medical conspiracy theories published in 2020 in Medicine, Health Care, & Philosophy in 2020 noted that most conspiracy theorists use "cognitive tendencies that are neurologically hardwired and probably have deep evolutionary origins." A 2016 study published in Nature found that, in fights, people who were most resistant to changing their beliefs showed a lot of activation in their amygdala and insular cortex. These areas regulate fear, decision-making, emotional responses and threats, and are extremely ancient. They originated when humans were hunter-gatherers, in a world that really was out to get us.

Why Do People Believe Conspiracy Theories?

Some people are more disposed to trust out-there ideas than others. "Demographically and politically, some but not all research suggests that conspiracy believers tend to be disproportionately female, conservative, and less educated," Hart says. Hart's own research in 2018, published in Journal of Individual Differences, found that people who are more distrustful of others, and tend to have more "eccentric" thoughts and behaviors, are more likely to believe in conspiracies. "They also tend to believe the world is a dangerous place and have a stronger need to be unique," Hart says. Hafeez adds that these beliefs tend to be popular among people who feel powerless or isolated.

Conspiracy theories might draw on some very ancient areas of the brain — but some people may simply have been more likely to believe that aliens built the Pyramids from the start.