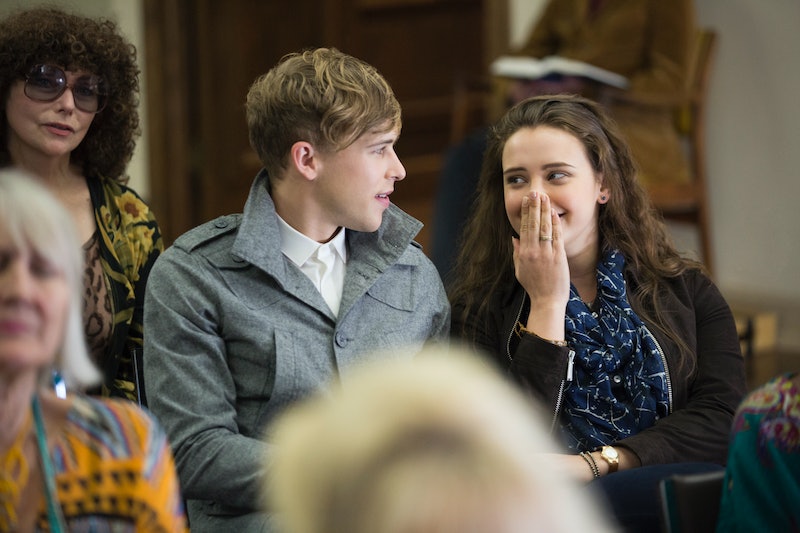 Spoilers for 13 Reasons Why Season 4, Episodes 1-10. The series finale of 13 Reasons Why offered up a hopeful ending for many of the show's fan favorite characters — and even brought back one familiar face. Ryan Shaver is in 13 Reasons Why Season 4, though the character only returns for a very brief cameo in the show's final episode. The poet — played by Tommy Dorfman — returned to Liberty High School one last time to see his friends graduate and catch up before joining the group to get some much-needed closure by burying Hannah's tapes.

Ryan played a major role in the show's first and second seasons, thanks to his involvement with the Evergreen Poetry Club, where he first meets Hannah Baker (Katherine Langford). He ends up on one of Hannah's tapes as a result of him stealing one of her poems and publishing it, with the poem ultimately getting read out loud in class, humiliating Hannah. Unlike the rest of the people on the tapes, however, Ryan is never ashamed of what he did, even telling Hannah that she will thank him one day for encouraging her talent and sharing it with people.

In Season 2, Ryan testifies about Hannah's poems at the trial and shares what he knows about her and her writing, and eventually apologizes to her mother for the role he played in her death. During that conversation Ryan tells Mrs. Baker that he's planning to spend a gap year in Europe after graduation — which explains why he doesn't appear in Season 3 at all. And he only makes one, very brief cameo in Season 4, returning from his travels to watch his friends graduate.

Ryan reappears at the seniors' post-graduation celebration, sidling up to Winston (Deaken Bluman), who is still in an awkward position with the group after threatening to uncover Bryce's murderer and turn them in to the police. (After finding out that it was actually Alex who committed the crime, he decides not to go to the cops after all.) "They'll hate you until they love you," Ryan tells him sagely, before smiling and introducing himself, while Courtney jokingly says he's "always working a room."

Later, as the group takes a moment to reflect on the end of their high school careers and plot out their futures, Ryan reveals his ultimate goal. "I fully plan on being famous," he tells his friends. "Like, not social famous. I mean so [famous] even the New York Times knows who I am." Would anyone expect anything less from Liberty's resident artiste?

Over the course of the show's four season run, the students have been through an extraordinary amount of traumatic events; all of them, from different walks of life were drawn together based on the school's tragedies. It's only appropriate that 13 Reasons Why ended with all of them — including Ryan — back together, reflecting on their experiences and looking forward to the future.

More like this
'The Crown' Season 6 Has Suspended Filming "Out Of Respect" For The Queen's Death
By Bustle Staff
'The Queen’s Gambit' Season 2 Tweet Wasn’t From Anya Taylor-Joy
By Mary Kate McGrath, Jack Irvin and Grace Wehniainen
Ashton Kutcher Wants Danny Masterson “To Be Found Innocent” In Rape Retrial
By Jake Viswanath
Here’s Everything Coming To & Leaving Netflix In February
By Jake Viswanath
Get Even More From Bustle — Sign Up For The Newsletter
From hair trends to relationship advice, our daily newsletter has everything you need to sound like a person who’s on TikTok, even if you aren’t.